"This video is the ultimate in Robot Wars. It features behind the scenes action, real drama from the pits, and never before seen footage from The First Great War. In this exclusive video we see more than ever before. Sit back as hosts Craig Charles, Phillipa Forrester and Jonathan Pearce take you on this incredible journey."
— The back cover

Robot Wars: The First Great War was a video based around the first series of Robot Wars. It was released on VHS on March 29th 1999, making it the first general video release of Robot Wars. It featured behind-the-scenes footage, clips of some of the earliest robotic combat contests, and highlights of the heats and grand final which saw Roadblock be crowned as the first UK Series Champion.

The title of the video is derived from the nickname of World War I.

The UK VHS release was originally shipped with a collectible tin box that included the VHS tape in a standard case inside.

While it was not released on DVD in the UK a release did occur in the Scandinavian region (Denmark, Finland, Norway and Sweden) in 2003 by PAN Vision (with the slightly different name Robot Wars: The First Great Wars). This release left out the "Robot Builder's Guide" that was on the UK release (though the back cover claims otherwise) and included Danish, Finnish, Norwegian and Swedish subtitles. In Finnish the video was called Robot Wars: Ensimmäiset Fantastiset Kamppailut and in Swedish it was called Robot Wars: De Första Stora Slagen.

Each heat shown followed the exploits of up to three out of the six robots in the heats from The Gauntlet onwards.

Throughout the video, a series of facts and statistics of Series 1 were revealed, including: 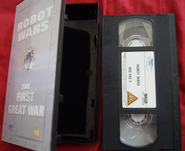 The VHS tape
Add a photo to this gallery

Retrieved from "https://robotwars.fandom.com/wiki/Robot_Wars:_The_First_Great_War?oldid=328577"
Community content is available under CC-BY-SA unless otherwise noted.