Robot Wars Wiki
Register
Don't have an account?
Sign In
Advertisement
in: UK Series competitors, Robots from Somerset, Robots with Spikes,
and 6 more

Spike & 12" cutting disc
Statistics correct as of its most recent appearance on the show, or if not applicable, qualification attempt.

Atlas was a robot that participated in Series 3 of Robot Wars, but lost in the first round to Challenger 2. The team entered Thud in Series 2, originally in the heavyweight event, but the team missed their qualifier, fighting instead in the super heavyweight category and losing to Siren.

Atlas was built at a cost of £400, and was armed in 2mm steel armour with a "West Country finish", complete with an 'expendable' animatronic mascot which played sound effects. The wheels came from a tractor, a lawnmower and a golf trolley. Atlas was reasonably heavy for its time, and used a spike and a 12" cutting disc for weaponry (reused from its predecessor Thud[1]), as well as a plate wedge, but this did not run flush to the ground, and the robot proved unreliable.

"We found some wheels from an old Ride-on lawnmower. The wheels are about 12inchs in diameter, 5 inches wide and covered in chunky tread, these wheels are connected to our new Klaxon 24v motor/gearbox combos with a ratio of 30.1.After these wheels were fitted and tested we found the robot performed with about a 500% improvement in traction and speed and lost what seemed like little in torque. It seems were on a winner!"
— Team Thud website on Atlas' locomotion (edited)

Atlas was originally planned to be painted a metallic purple, with a generally flatter design, but this changed ahead of its appearance in Series 3.

Atlas was named in reference to the Greek titan Atlas, with the team's website subtitling their robot as the 'God of Strength'[2]. Despite this, Jonathan Pearce made numerous references to a roadmap atlas when commentating the robot's battle.

Atlas was entered into Series 3 by Team Thud, a team based in Bath who had briefly competed in the previous series with the super heavyweight competitor Thud. The team was captained by Richard Dallimore, who was joined by wife Janet and friend Paul Sharp.

Atlas competed in Heat M, where it faced Challenger 2 in Round 1.

Atlas sped out and rammed Challenger 2, but to little effect. Atlas turned to use its saw blade, but it caused little damage to Challenger's armour. Atlas pushed Challenger back, then was pushed back itself into a Side Grinder. Challenger backed away, and then rammed Atlas again. Neither of the two robots' weapons were effective, but Challenger kept up its attack. Sgt. Bash torched Atlas from his CPZ, before Atlas was rammed by Challenger again. These attacks rendered Atlas immobile, so the House Robots closed in.

"Let's turn the pages of the Atlas, shall we? What country is that going to come down in?"
— One of Jonathan Pearce's puns, relating to Sir Killalot lifting Atlas up with its lance.

Sir Killalot used his lance to crunch through the bodywork of Atlas, levering it up at the same time. Sir Killalot held it over the Flame Pit, in an attempt to melt the toy mech on the top of the robot. Instead, Shunt hacked its head off, and then smashed it down onto the flames below. Atlas was then dropped on the flames, but Shunt pushed it off after a while. Smoking, Shunt battered it with his axe until cease was called. Atlas was beaten, and eliminated from the competition. 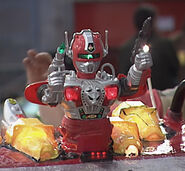 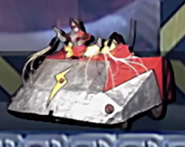