Circular saw & lifting tusk
Statistics correct as of its most recent appearance on the show, or if not applicable, qualification attempt.

"Was the beast of Bodmin Moor myth, legend or real monster? This has a front tusk, a circular saw and a pneumatically controlled cheeky wink! Keep your eye on this one!"
— Jonathan Pearce introduces Beast of Bodmin

Beast of Bodmin was a heavyweight robot which competed exclusively in Series 3 of Robot Wars, and was the successor to former champion Roadblock. It finished among the top eight robots in the series, with successive victories over Crusher, Onslaught, Invertabrat and Blade before losing to newcomers Steg-O-Saw-Us in the second round of the semi-finals.

"Roadblock, winners of the First Wars...I'll tell you what though, it's not dissimilar in design to Beast of Bodmin."
— Jonathan Pearce comments on Beast of Bodmin's similarities to its predecessor

The robot was very similar in shape to the team's original robot and former Robot Wars champion Roadblock and had a petrol-driven circular saw at the back just like its predecessor, except with a custom built blade, coloured yellow. However, this new robot was coated in fibreglass with aluminium sheet for the decorative spikes, and the robot was painted in the yellow and black colours of the Cornwall County rugby team. The team members complemented this by wearing shirts from the rugby team itself. Beast of Bodmin also featured a new lifting 'tusk' weapon replacing the large scoop at the front, powered by a CO2 pneumatic ram. The top speed of the machine was said to be a respectable 15mph, however the robot very rarely reached that speed in any of its battles. The robot also featured a set of eyes at the back, with eyelids which could blink/wink.

Beast of Bodmin was named after the mysterious wildcat creature of the same name that was said to exist in the Cornwall area where the team lived.

"We designed the BEAST to be more than just a fighting machine, we wanted it to have a viewing appeal and we think the eyes provide just that, it has character, style and attitude. We hope you agree."
— Beast of Bodmin website

Beast of Bodmin was entered into Robot Wars by former champions of the show, best-known for winning the first series of the show with Roadblock. The team represented Bodmin Community College, in Cornwall. The team captain and driver of the robot was Hender Blewett, with teammate Chris Kinsey helping to construct the machine. Both were Systems & Control students at the college. Their teacher Peter Kinsey also completed the team, and the robot's drive system was partially put together by members of the Tor team.

Beast of Bodmin participated in Heat I of the Third Wars. In the first round of the heat, Beast of Bodmin was placed up against another returning team, Team Wharthog with their new machine, Crusher.

The battle started badly for Beast of Bodmin, as Crusher was immediately able to grip and pierce into the shell of Beast of Bodmin, causing very noticeable damage to the previous Grand Finalists. As it was the slower machine of the two, the Beast of Bodmin couldn't run away to make a run-up to create its own attack. It tried to bring its circular saw into action, but it suddenly stopped working. The situation didn't improve straight away as Crusher creating yet more holes into the Cornish machine. Eventually however, Beast of Bodmin was able to attack the side of Crusher with its front tusks, and was able to remove the chain from one of its tracks, leaving Crusher unable to move at all. Beast of Bodmin then pushed Crusher into the arena side wall, before retreating into the middle of the arena to let the house robots attack Crusher until cease was called. Beast of Bodmin was declared the winner and was put through to the next round of the heat.

"...and a smile from the former champions, with their fan club"
— Jonathan Pearce, as the TV camera first views the Beast of Bodmin team, and then the fans in the audience

In the second round, Beast of Bodmin faced a grudge match as it was placed up against previous Heat Finalist Onslaught, a robot which lost to the team's previous machine Roadblock in the previous series.

In this battle, Beast of Bodmin was lifted up twice by the lifting scoop of Onslaught, but was not tipped over due to the sizes of both Onslaught's weapon and the Beast of Bodmin. Later on, Onslaught then drove away for a run-up, before then carelessly driving up the wedge of Beast of Bodmin and landed upside-down, leaving it unable to self-right, therefore immobilised. As Onslaught landed, Beast of Bodmin moved up to the overturned machine and famously gave a wink for the camera. Beast of Bodmin then moved away as the house robots inflicted damage onto Onslaught, damage in particular caused by Dead Metal. Cease was soon called and Beast of Bodmin was put through to the Heat Final.

Craig Charles: "...those lovely eyes at the back of your robot, what are they there for?"
Hender Blewitt: "Well, we have to provide something to give Philippa a wink"
Craig Charles: "What is wrong with me?!"
— Post-battle interview

In the Heat Final, Beast of Bodmin was placed up against newcomer Invertabrat.

In this battle, Invertabrat also started as the more aggressive machine of the two, as it also tried to flip Beast of Bodmin up with its lifting weapon, however, once again, Beast of Bodmin's opponent was unsuccessful. Beast of Bodmin then started to counter-attack and skilfully used its wedge shape and power to scoop up Invertabrat and push it into Matilda's CPZ. Invertabrat just about escaped the CPZ, but then suddenly lost drive in one wheel up against the arena side wall. Beast of Bodmin held back at this point, as the house robots chose to continue causing damage to Invertabrat, Matilda losing a horn and her shell in the process. As cease was eventually called, Invertabrat was still mobile on one side, but the result was obvious, as Beast of Bodmin was in fact declared the winner, and was put through to the Series Semi-Finals.

In the Series Semi-Finals, Beast of Bodmin was placed up against newcomer Blade in the first round.

In this battle, Beast of Bodmin finally started the battle as the dominant of the two competitors. Blade was constantly on the retreat, as Beast of Bodmin tried several times to use the lifting tusk weapon to flip Blade over, however all were unsuccessful. Blade scuttled across to the other side of the arena, from the flame pit to the arena spikes on the other side of the arena. Beast of Bodmin kept up the pursuit, and was finally able to get in underneath Blade and use its lifting tusk weapon to tip Blade onto its side. With Blade now unable to pull away, Beast of Bodmin then turned around, and pushed Blade onto its back, a position of which it definitely couldn't fall back onto its wheels, deeming it immobilised.

The house robots then closed in to cause some more damage to Blade, before cease was called, signalling Beast of Bodmin's progression to the next round of the Semi-Final. In the second round, Beast of Bodmin was placed up against original reserve for the series in Steg-O-Saw-Us.

This proved to be rather more difficult to defeat, especially as Beast of Bodmin was already tiring as it entered the arena. Throughout the battle, one of the eyes of Beast of Bodmin remained shut. In terms of fighting, Steg-O-Saw-Us used its brute force to continuously ram Beast of Bodmin into the arena side wall until the Cornish machine started to slow down to a gentle halt, and eventually, the robot ceased moving completely, deeming it immobilised. As their time ran out, Shunt began to axe through the aluminium sheets on the front of Beast of Bodmin.

The former champions were finally finished off by the arena floor flipper, rolling over once in mid-air, but still landing on its wheels again afterwards. Cease was then called and Beast of Bodmin was eliminated from the competition. Beast of Bodmin and the team subsequently retired from Robot Wars after this defeat.

Beast of Bodmin being tested on Roadblock 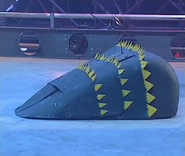 Beast of Bodmin in the arena

Official image of Beast of Bodmin, with an extended decorative tail

Although Beast of Bodmin and the team have long been retired from combat robotics, Beast of Bodmin occasionally appeared at the annual Bodmin Steam Fair as an exhibition piece.