Robot Wars Wiki
Register
Don't have an account?
Sign In
Advertisement
in: UK Series competitors, Robots that only lost in the Gauntlet or Trial, Robots from Surrey,
and 6 more

Multiple spinning weapons
Statistics correct as of its most recent appearance on the show, or if not applicable, qualification attempt.

"Named after the beast in Shakespeare's Tempest, and hoping to whip up a storm! Caliban's built from a bolted dexium frame, powered by two 12v batteries. It's spinning dome has slashing and cutting weapons."
— Jonathan Pearce introduces Caliban

Caliban was a competitor robot which exclusively fought in Series 2 of Robot Wars. In its only appearance, it was eliminated at the Gauntlet stage after Sir Killalot picked it up and turned it over close to the start.

"When a man hits an object with a large hammer all of the energy is kinetic, its speed and mass produces the damage. So instead of using a hammer why not use a circular hammer with blades on the side to instead of cave things in, rip things off."
— The Caliban website on pioneering the full body spinner on Robot Wars[1]

Caliban was a purple, cylindrical-shaped robot built from a bolted dexion frame, and featuring an aluminium shell. The robot was two-wheel driven and armed with a pair of interchangeable horizontal spinning weapons powered by a flywheel-based mechanism - a top-mounted flail, and a spinning dome made from a 40kg wok. The dome concealed the robot's chassis and featuring a pair of cutting blades along its lower rim, with a top spinning speed of 200rpm.[1] During Team TFOSICA's televised introduction, it was alternatively stated that the 'dome' was made out of an industrial fan and featured a polycarbonate top rim.

The 'dome', while potentially the first full-body spinner to appear in a televised Robot Wars competition, was never used, as Team TFOSICA elected to use Caliban's flail for its Gauntlet run. Nevertheless, test footage aired as part of the first episode of Robot Wars Revealed suggests that the flail was powerful enough to knock over paint pots, water tanks and traffic cones, as well as puncture a plastic soft drinks bottle.

Caliban was sponsored by the company SCOOT, which the robot's visuals were designed to match.

As well as introducing the full-body spinner, the team would also enter the first large vertical spinner into the UK Robot Wars, Daisy Chopper, in Series 3.

"Because of the large currents involved it will be switched on and off using the solenoid connected to it. It will not be run constantly as Dreadnaut demonstrated starter motors burn out if used for too long, it will be switched on by radio to start the wok, then at tested intervals to keep up the speed and KE."
— The team on running Caliban's spinning shell intermittently[1]

Caliban was named after the main antagonist of The Tempest, a play by William Shakespeare. Various test robots built during the creation of Caliban were also known as 'Tibalt' (drive system)[2] and 'King Lear' (weapon)[3] to reinforce the Shakespearean theme.[4]

Caliban was entered into Robot Wars by Team TFOSICA, which in the TV series was comprised of captain Eric Hodgins, alongside Daniel Bushnall and Martin Beckett. Eric Hodgins was the lead electronics expert of the team, Daniel Bushnall was responsible for building the shell of Caliban, while Martin Beckett also helped with manual labour. Outside of the televised team, extra team members Jaspreet, John and Eric's son Neil all helped with construction and other aspects of Caliban.

Caliban qualified for The Second Wars after attending the auditions. A successor to Caliban, Caliban 2 was listed as an entry for The Third Wars, however it would not be seen in the televised series[5]. Team TFOSICA would ultimately enter Daisy Chopper into the same series, although it is unknown whether Caliban 2 was a renamed Daisy Chopper, or a separate robot which was scrapped in favour of it.

Caliban competed in Heat A of The Second Wars, and was the fourth robot in that Heat to attempt The Gauntlet. In the televised episode, it drove steadily out of its starting gate, turning towards and taking the left-hand route. However, as it turned, it hit the spiked pyramid near the 3.0m marker, and struggled to drive effectively as it backed and hit the pyramid again.

Eventually, Caliban turned and drove alongside the pyramid, proceeding further down the route towards the first pit and a waiting Sir Killalot. It immediately reversed as the House Robot blocked its path, at which point driver Martin Beckett began experiencing visibility issues which Eric Hodgins would later report in Robot Wars Revealed.[6] Caliban, having reversed into the 3.0m marker, retreated back towards the starting area as Sir Killalot closed in. Caliban attempted to drive past Sir Killalot, but got intercepted and nudged aside; seconds later, it spun its flail up, hitting the cables for Sir Killalot's left arm and tearing the 3.0m marker off the side rail. According to the SCOOT website, Caliban's attack was sufficient to disable Sir Killalot's jaws of life and cause hydraulic fluid to leak onto the arena floor, though this was not addressed on television.[6]

Still with its weapon spinning, Caliban was pushed backwards against the side rails by Sir Killalot's lance, which lifted and proceeded to hook Caliban by the weapon chain before turning the entire robot over.

"Sir Killalot closes in though! Can he stop that flail, flail... rock and roll! Caliban dead and buried - hoisted by his own petard!"
— Jonathan Pearce as Caliban is flipped over by Sir Killalot.

'Cease' was called as Sir Killalot pushed the inverted Caliban back against the railings once more, Team TFOSICA's machine officially deemed to have covered a distance of only 0.2m as a result. According to Team TFOSICA, the robot had actually travelled up to five metres prior to encountering Sir Killalot.[6] Regardless, Caliban was the first competitor to be eliminated from The Second Wars.

According to Oliver Steeples, Team TFOSICA later complained to Philippa Forrester that Caliban's Gauntlet run was 'rigged' in an attempt to showcase the strength of Sir Killalot. They subsequently approached the Robot Wars organisers to voice their concerns, the latter admitting an unspecified error on their part upon reviewing the accompanying footage.[6] Additionally, unbeknownst to Eric Hodgins and his teammates, Sir Killalot also cut into one of Caliban's wheels after 'Cease' had been called. Though none of the aforementioned moments were shown on television, the tyre damaged by Sir Killalot was retrieved with the robot and briefly presented by Forrester during an interview aired in Robot Wars Revealed.[7]

"These set of matches, called Melee and Grudge matches, are to be televised and only the best robots are usually allowed to complete. So we find ourselves on Thursday being where we wanted to be all along, in the middle of a six way fight. Caliban is designed for this type of battle and we think we will do really well!!"
— Team TFOSICA on the six-way melee Caliban was intended to enter

Though eliminated early from the main competition, the SCOOT website reveals that Caliban was subsequently entered into an unspecified six-way melee at a later point in the Series 2 filming schedule. This gave it the possibility of reappearing in the end-of-series Grudge Matches special, though this would not materialise and no further information on this fight is currently available. After filming of Series 2 had concluded, Team TFOSICA also began refining Caliban's design ahead of a second Grudge Matches event to be filmed in February 1999, which was to potentially include international competitors as a precursor to the fully-fledged World Championships.[6] This event, however, did not happen, and Caliban would ultimately be succeeded by the team's next creation, Daisy Chopper, ahead of The Third Wars.

Caliban with Team TFOSICA, in its full-body spinner configuration 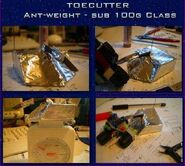 To aid with the completion of Caliban, Team TFOSICA built two further robots to test its drive and weapon systems prior to the final machine's assembly. These were Tibalt, which only incorporated a single drive motor, and King Lear, equipped with a prototype version of the robot's spinning dome. Both were named after antagonists from other Shakespearean works, continuing the theme chosen for Caliban.

The team also built an antweight named Toecutter (not to be confused with the later Series 3 entry), featuring a front wedge shape, a hinged blade weapon and aluminium foil armour.