Cassius Chrome was a silver and red, two-wheel drive House Robot designed by Rob Englebright, who also entered later series of Robot Wars with Killer Carrot 2. His design was based on that of a heavyweight boxer, complete with a cartoonish head featuring a black eye and a mouth-shaped grille designed to resemble gritted teeth. Cassius Chrome's main weapons were a large static shovel located underneath his head, as well as a pair of cam-driven 'boxing' arms with interchangeable 'fists', which weighed in at over 15kg each. The 'fists' ranged from sharp spear-like spikes to ramming blades modelled on mechanical-style boxing gloves, which were designed to 'punch' competitors and cause internal damage as well as prevent robots from being able to drive away from his shovel when rammed.

While Cassius Chrome's 'fists' were not as capable of causing external damage as much as the weapons found on the other House Robots, they proved very effective in knocking internal components loose, as demonstrated in the Third World Championship qualifier between Supernova and Mechaniac. He also had a top speed of 20mph, the fastest for any House Robot to date, which gave him exceptional pushing power and the capacity to cause damage by ramming into competitors. In effect, Cassius Chrome combined the main attributes of both Shunt and Growler into a single House Robot, although he was often paired with the former throughout Series 7.

Lead designer of the House Robots Chris Reynolds revealed that Cassius Chrome was largely built so that new hosting channel Five could have their own House Robot unique to their series, but he saw Cassius Chrome as a disappointment and attributed this to a shortage of budget and having only around three weeks to build him[1].

"In the arena for the House Robots - a new one for you! Cassius Chrome, a boxing robot."
— Jonathan Pearce introduces Cassius Chrome

With The Seventh Wars not promoting the House Robots in an introduction montage like in previous wars, Cassius Chrome did not get a televised rundown. Instead, Jonathan Pearce simply noted the new House Robot in his debut battle, a World Championship qualifier between Supernova and Mechaniac.

"Get out of the way, Sir Killalot, I want to see the new House Robot. There it is, look, the little boxing fists."
— Jonathan Pearce as the Cassius Chrome lurks near the action during his debut

In the battle, Supernova immobilised its Austrian opponent with its spinning disc, also knocking out the back panel. Cassius Chrome utilised this by punching out Mechaniac's now exposed batteries with his fists. This also set fire to the orange robot's internals.

Cassius Chrome also appeared in three more special events, with the Crusher Crunch Up forcing him into separating all three robots towards the end of the battle, as they had become entangled next to the arena wall. Cassius Chrome's intervention was also key in helping Mantis prove its outright mobility as cease was called.

"There's our ringmaster."
— Jonathan Pearce as Cassius Chrome spins in delight after finishing off Scraptosaur

Cassius Chrome carried out arena hazard duties for the first time as he placed Tomahawk on the Drop Zone in Heat C, where it had a body panel popped loose after the impact from an ocean buoy. He also pitted Scraptosaur in Heat H and placed Spin Doctor on the floor flipper in Heat M.

As well as finishing off beaten robots, Cassius Chrome was also targeted in multiple House Robot attacks from the competing robots - battles in which he held his own.

The first instance of this was in the Axe Attack, where, halfway through the battle, Hydra and Iron-Awe 2.1 turned their attention to the House Robots and attacked them instead. Shunt was quickly thrown over by Hydra, but Cassius Chrome held his own, as he came in with a couple of strong charges on Iron-Awe 2.1, who also failed to flip him over. Cassius Chrome managed to survive in the end as Hydra fell down the pit as it descended.

In the House Robot Rebellion, Cassius Chrome started off by beaching himself over the pit, before being flipped into it by Gravity, forcing Jonathan Pearce to question his intelligence by joking:

"Cassius Chrome, let me tell you, he's not the brightest."
— Jonathan Pearce just before Gravity flipped Cassius Chrome into the pit

However, the pit was raised again and Cassius Chrome was righted by Refbot. He put in a strong display for the rest of the battle as he easily fended off Behemoth by spinning furiously on the spot, and was also the only House Robot still mobile by cease, as Mr. Psycho broke down towards the end of the battle.

Cassius Chrome was involved in a battle between Panic Attack, Kat 3, Firestorm 5 and Bigger Brother in the first round of All-Stars Championship - a battle not dissimilar to the Axe Attack, as the competing robots attacked the House Robots instead of each other, but this time, straight from when activate was called. After Shunt was flipped by Firestorm 5 early on, the four competitors ganged up on Cassius Chrome by pushing and lifting him, as well as knocking off his eye. Unfortunately for Cassius Chrome, even though he managed to stay on his wheels, the robot that ended up blinding him, Kat 3, was also telling in his demise, as it hit a vital spot in his intervals, rendering him immobile.

Cassius Chrome was involved in one more House Robot attack from a competitor machine, as Pussycat decided to have a go at the House Robots after beating Dantomkia in the All-Stars final. Pussycat was unable to assert itself however, as Cassius Chrome slammed it into the arena wall multiple times and roasted it on the flame pit before it was nudged into the pit by Mr. Psycho.

Cassius Chrome was also involved in a comical incident with his partner House Robot in the battle, as Mr. Psycho's claw caught Cassius Chrome's eye, sending Jonathan Pearce into hysterics.

Rather fittingly, Shunt and Cassius Chrome, the first and last House Robots to ever be introduced on the show, both appeared together in the last battle of the show's original run, in the final of The Third World Championship between Storm 2 and Supernova. 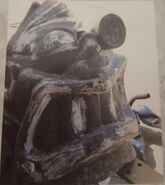 Cassius Chrome's head being made

Cassius Chrome in the Pits 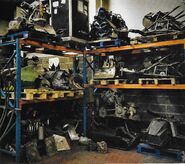 Cassius Chrome and the other House Robots stored in the warehouse