Robot Wars Wiki
Register
Don't have an account?
Sign In
Advertisement
in: UK Series competitors, Pinball only competitors, Robots with Lifters,
and 8 more

Spiked pneumatic lifter
Statistics correct as of its most recent appearance on the show, or if not applicable, qualification attempt.

"It's actually got more processing power than the first space shuttle, so we're quite proud of that."
— Team Crusader

Crusader 2 was a robot from Essex that competed in Series 4 of the television game show Robot Wars. It reached the second round of its heat before being defeated by Mortis. Its predecessor, Crusader, also competed in the Series 3 Pinball side tournament, finishing joint-fourth with a score of 90 points.

Both versions of Crusader were invertible, low box-shaped robots with sloped sides and wedges, six-wheel drive, polycarbonate armour and a small pneumatic lifting arm located at the front. The centre two wheels were noticeably larger than the others, giving Crusader 2 a fast rate of spin on both sides. Both Crusader machines also featured two white lights on the front wedge resembling eyes, as well as strips of red LEDs along the sides which pulsated as they moved.

"The robot has a welded high strength steel chassis made from 6 main spars which travel the length of the robot giving it good strength along its main axis. Each spar is flanged to increase its rigidity and finally braces have been added perpendicular to each of the spars. Again each of the braces is flanged for rigidity. All the spars and braces have lightening holes which also aid access for assembly. The resulting chassis is light weight (less than 16Kg) but very strong. The wheels are mounted on axles which are supported between the outer 2 chassis spars on each side. This ensures that the axles cannot be bent and also provides protection to the wheels on all sides."
— The Crusader website[1]

The original Crusader that appeared in Series 3 was painted yellow and black with a hazard sign printed on the top armour, and featured a wider lifting arm. The robot had a steel chassis, polyurethane tyres for extra grip, and two 24V EMD 700W motors. 2 24V EMD 700W motors It was powered by two 12V, 16Ah, Dry Fit batteries, and had drive electronics designed by the team, with two drive boards, one for each drive motor, each capable of delivering 100A. The robot also had a 0.8 litres high-pressure air reservoir linked to a 10 Bar first stage regulator which powered the flipper, which the team referred to as a shovel. The shovel had the power to lift around 80Kg in 0.3 seconds to a height of 450mm.

At the Series 3 auditions, this version was repainted black with red and yellow decals, with yellow and black hazard stripes on its lifter. Originally, Crusader was designed to have four wheels, but the team decided to change it after building the prototype.

"This nifty little robot appeared only in the Pinball in the last series. It's low, unflippable, and has a 16-bit telemetry system like a Formula 1 racing car so the team can analyse its performance"
— Robot Wars Magazine on Crusader 2

Crusader 2 sported a white and red paint scheme resembling the cross of the Crusaders, from which it got its name, and had its lifting arm modified to include a pair of stainless steel spikes on its tip. Greater attention was made towards Crusader 2's dual redundant chain drive throughout its Series 4 appearance, which enabled a second drive chain to take over another if one broke, snapped or came off, allowing the robot to continue fighting. The lifting arm also had the capacity to lift Crusader's own weight. Crusader 2 proved surprisingly fast and aggressive in its only main series appearance, but the dual redundant chain drive proved unreliable, and its polycarbonate armour was easily damaged.

"Crusader is the creation of a group of engineers from PFE (Printed Forms Equipment Ltd.), an Essex mailing equipment manufacturer , and uses many of the design and manufacturing techniques used by our company (because we couldn't afford to make it any other way!!!) Our team at PFE includes the following engineers:- Chris Williams, team leader and mechanical designer. Dave O'Reilly, Software designer. Hari Bahra, electrical/electronics coordinator"
— The Crusader website

Crusader was entered by a team of work colleagues from Essex. Team captain Chris Williams was the only team member to be present in both the team's appearances. All of the team members, and various other people who worked on the robots, worked in the Design and Development Department of Printed Forms Equipment.

"Unfortunately Mentorn, the production company for the series, would not put us into the main heavy weight competition, probably because we did not have some silly gimmick. So we only appear briefly in the Pin ball event (our moment of glory was shown on the last day of the millennium). We still feel very hard done by but wont give up and we will be returning better than ever for series 4."
— The Crusader website[3]

As the second robot to compete in the Pinball competition, Crusader started well, immediately toppling the barrels, before dodging Sir Killalot and Sergeant Bash to hit the 50-point target. After briefly getting stuck under the target, it was freed by Sergeant Bash and hit the multiball release, scoring more points and pressing one of the balls against the latter until it exploded. However, Crusader immediately hurtled across the arena, drove close to one of the pits and hit the wall, before abruptly ending its run by reversing itself into the second pit. Even so, Crusader still scored 90 points, enough for it to finish joint fourth overall in the Pinball competition, along with Eye of Newt.

"In the Pinball challenge in the last wars, they didn't exactly provide us with a barrel full of laughs. Steady but...lacking in ambition. Had a love affair with those barrels."
— Jonathan Pearce's recap of the first Crusader during the Fourth Wars

Crusader 2 entered Heat D, facing the seventh seed and previous Grand Finalist Steg 2 alongside Cronos in its first round battle.

Crusader 2 drove into Steg 2 and flipped it against the arena wall, with Dead Metal helping to re-right Steg 2 as he attacked it. Crusader 2 proceeded to attack Cronos, before Steg 2 rammed into both robots and flipped Cronos a full 360 degrees. It then proceeded to ram Steg 2 into the wall again, causing the latter's flipper to catch fire after being placed close to the flame jets, before lifting and shoving it into Dead Metal again. Both Crusader 2 and Steg 2 became locked together, with Cronos coming in to separate them. Steg 2 then became stuck against the arena wall, with Crusader 2 slamming into it again and freeing it to resume their battle together. Even so, both Crusader 2 and Steg 2 would progress anyway, as Cronos was pitted by Sir Killalot not long afterwards.

In the second round, Crusader 2 fought the twenty-third seed Mortis.

It began strongly, lifting Mortis up before Mortis pinned it against the wall and began hitting it with its rapid-firing axe. Eventually, Mortis' axe became embedded in Crusader 2's top armour as the latter lifted it again, and both robots were separated as they slammed into Dead Metal. Mortis then axed and rammed Crusader 2 into Shunt, where part of Crusader 2's bottom armour fell off. Eventually, Crusader 2 lost drive to one side, its dual-chain system failing to work, and was attacked by Shunt, Dead Metal and Sir Killalot as it became apparent that it was no longer fully mobile. As a result, Crusader 2 was duly eliminated from the Fourth Wars.

The original Crusader with its team

The insides of the Series 3 Crusader

The Series 3 Crusader outside 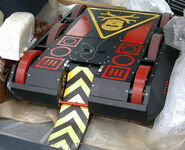 Crusader with a different paint job at the Series 3 auditions

The team with Crusader 2

Crusader 2 in the Robot Wars Magazine

Crusader 2 in The Official Robot Guide

The whole team with Crusader 2 and beers