Robot Wars Wiki
Register
Don't have an account?
Sign In
Advertisement
in: UK Series competitors, Robots from Dorset, Robots with Spears,
and 10 more

Front & Rear Spikes
Statistics correct as of its most recent appearance on the show, or if not applicable, qualification attempt.

"It's not the most dangerous, but Craig, it looks hardy to me"
— Jonathan Pearce

Demolition Demon was the name given to two heavyweight robots which appeared in Series 2-3 of Robot Wars. The original robot successfully entered Series 2, where it reached the Heat Final of the first episode in the series, but lost to Napalm on a controversial Judges' decision.

In Series 3, the team entered its successor, Demolition Demon 2, into the Robotic Soccer side competition; however, it quickly lost its qualifier to Velocirippa.

The original machine was a double-sided wedge-shaped robot, armoured in galvanised materials, with a top speed of 8mph. Its weapon was a rear circular saw, powered by what the show described as a 22 horsepower motor (although this was likely a typo that would read 2.2 horsepower), and a static spike on the front. Three 12V batteries powered the machine. Its wheelchair motors were were donated by Dorset County Council and all the components were kept in a small box for protection.

Demolition Demon 2 was a box-shaped robot, armed with a spike. Its colour sceheme used black, yellow and red stripes, resembling the Belgian flag, although the robot brandished several Union Jacks. It was built to be internally stronger than the previous version, and was over 12kg heavier, but had a high ground clearance.

Demolition Demon appeared at the Series 2 rehearsals with no weaponry or armour, despite this it was still successful in qualifying for the series.

With an upgraded machine, Demolition Demon attempted to qualify for the Third Wars but this time it was unsuccessful, however, it still would go on to appear in the Robotic Soccar side event.

"This is a project we've done, it's joint design technology and electronics, and Pete had the idea when he started watching the first Robot Wars series, and it just went from there really! We never really thought we'd get this far, it was a bit of a shock to be honest!"
— Theo Mauger in Robot Wars Revealed[1]

Demolition Demon was entered by students from The Thomas Hardye School in Dorchester, along with their teacher Alan Rowse. Four team members were present in Series 2, with Alan Rowse not being credited on the statistics board, but Adrian South was not present in Series 3.

Demolition Demon managed to outmanoeuvre all of the house robots in the Gauntlet (including Sir Killalot) and finished the Gauntlet, easily making it through to the Trial stage, after placing first, completing the Gauntlet in the quickest time in the Heat.

Demolition Demon continued its streak of placing first, winning the Skittles event by a clear margin, knocking down twenty barrels. Despite this success, the House Robots used Demolition Demon as a target to demonstrate their power, and Sir Killalot picked it up, holding it in place for Matilda to put a large scratch on Demolition Demon, using her chainsaw.

In the heat semi-final with Victor, it was able to push Victor around with ease. Demolition Demon pushed Victor into the PPZ, despite it escaping before the House Robots could come in. Just as Victor was moved into the middle of the arena, it broke down. Demolition Demon was then suddenly turned over by Shunt, and the win was initially given to Victor as a result[2], but once attention was brought to Victor's immobility, the decision was reversed and Demolition Demon advanced.

Demolition Demon then fought Napalm in the Heat Final, in what proved to be a another controversial battle.

Napalm was able to push Demolition Demon around before driving into the PPZ itself, Demolition Demon was able to nudge Napalm's side a few times before eventually nearly toppling Napalm with its wedge shape, however cease was then called. The judges' decision went in favour of Napalm, which was not a popular outcome.

"DD was the second robot in RW to become a victim of the dubious decision rule."
— Oliver Steeples on the roboteers' reception to the Judges' decision[3]

The re-designed Demolition Demon only competed in the Robotic Soccer competition. Its opponent Velocirippa capitalised on a defensive error by Matilda to dribble the ball halfway across the arena and score past goalkeeper Dead Metal, eliminating Demolition Demon 2 from the competition.

NOTE: Demolition Demon's Gauntlet and Trial runs are not included 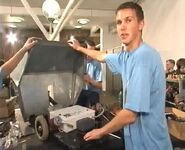 The insides of the Series 2 Demolition Demon

The team in Series 2 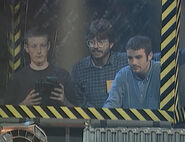