None
Statistics correct as of its most recent appearance on the show, or if not applicable, qualification attempt.

Eubank the Mouse (originally named The Mouse and alternatively referred to as Mouse during exhibition displays) was a lightweight stock robot which competed in Series 1 of Robot Wars. Originally built by Derek Foxwell for the 1995 UK Open Competition, it was entered along with WYSIWYG and Grunt to make up for a shortage of genuine competitors, and reached the Trial stage in its heat. As it was not allowed to qualify for the arena stage, Eubank the Mouse was eliminated there due to an alleged breakdown, allowing T.R.A.C.I.E. to progress despite being mobile for longer than the latter.

The robot's name in the televised series referenced British middleweight boxer Chris Eubank, with the boxing gloves attached to the robot being a further allusion to his career.

Eubank the Mouse was a grey pyramid-shaped robot with a small pyramid-shaped head designed to resemble that of a mouse. The robot was decorated with a pair of spectacles on the mouse's head and two flexible arms with boxing gloves attached to the end, as a reference to its namesake. While Eubank the Mouse largely had no weapons, both arms were referred to as such on its statistics board, as a 'Right Hook & Left Cross'.

With a top speed of 15mph, Eubank the Mouse was one of the fastest competitors in Series 1, and one of the lightest at 20kg. While fast and highly manoeuvrable, the robot suffered from top-heaviness and stability issues, the latter issue emphasised by it falling off the ramp during its arena introduction.

Eubank the Mouse was originally named The Mouse, and it was under this guise in which it was entered by Derek Foxwell into the 1995 UK Open Competition. It was among the robots representing the UK, competing in various events against a few experienced American competitors from the 1994-1995 US Robot Wars live competitions.

According to Mat Irvine in the first issue of Robot Wars: The Official Magazine, it fought at least one combat battle against The Master, surviving blows from its opponent's circular saw as a result of its steep pyramid-shaped body. The outcome of this battle remains unknown, with no footage of this from the complete 1995 pilot tapings publically available at present.

"The Mouse was unarmed and could inflict little damage itself, but the steep sides of the bodywork had the advantage that they were almost impossible to hit straight on. I can recall the mighty saw of The Master taking quite a few swipes at The Mouse, only to see it skid harmlessly off the sides."
— Mat Irvine on The Mouse's durability against The Master's circular saw[1]

In some events, The Mouse was designated as a referee under the name House Mouse, effectively serving as a prototype House Robot.

House Mouse served as the referee for a battle between The Master (now equipped with its large swinging blade) and an unknown Rabbit robot. In the battle, The Master quickly disposed of its opponent by flipping it over with its sword, before proceeding to attack House Mouse.

"And out of the mousehole he comes, past our own kitty cats!"
— Jonathan Pearce as Eubank the Mouse starts its Gauntlet run

Eubank the Mouse competed in Heat F, and was the fourth robot in that heat to traverse The Gauntlet. In its run, it immediately darted off the turntable towards the right-hand route, past Sergeant Bash and into the side rails. Dead Metal nudged Eubank the Mouse away as it turned round, with Eubank the Mouse swiftly avoiding both House Robots before again bumping into the rails as Matilda came in. Eubank the Mouse bumped into a spiked pyramid and Matilda seconds later, before finally reaching the end zone.

Jeremy Clarkson: "I've got to say, ordinarily I don't like to see my pets being beaten, but that was great."
Steve Dove: "Yeah, it was brilliant. Absolutely brilliant!"
Jeremy Clarkson: "Did you really expect to be able to beat them?"
Steve Dove: "No. I was hoping to get them at half-way, and then I think, I thought they'd just get me."
— Jeremy Clarkson and Steve Dove discuss Eubank the Mouse's Gauntlet run

Having completed The Gauntlet in the quickest time, this run enabled Eubank the Mouse to finish first overall in the results table, allowing it to qualify for the Snooker Trial.

There, it drove tentatively out of its pocket and approached The Blob, but avoided the balls as it turned round and reversed into Prince of Darkness. Eubank the Mouse bumped into the side nets, before reversing again and pushing several balls around in a corner of the arena. It continued driving around the top corners of the arena, nudging balls away and avoiding the other competitors, before suddenly driving into the side rails and seemingly becoming immobile there. Scoring no balls by the end of the Trial, and despite being mobile for considerably longer than T.R.A.C.I.E., Eubank the Mouse was eliminated from the First Wars, due to it being a Stock Robot and not allowed to progress to the Arena stage. The reason for Eubank the Mouse's elimination was attributed on-screen to it having 'irreparably broken down'.

"Oh hard cheese, it was a bit of a tight squeak, and I'm afraid The Mouse has gone out."
— Jonathan Pearce announces Eubank the Mouse's elimination

This Series Record is reflective of Steve Dove, Eubank the Mouse's driver.

Eubank the Mouse during Series 2 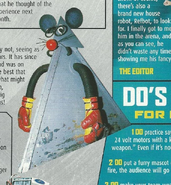 Eubank the Mouse in the Robot Wars Magazine circa 2000

The base and insides of Eubank the Mouse

Eubank the Mouse in The Pits during Extreme 1 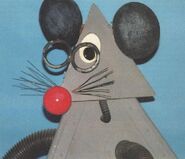 Close-up of Eubank the Mouse's head from Robot Wars: The Official Magazine

Following its appearance on Robot Wars, Eubank the Mouse continued to appear at live events and exhibitions as both a static display and as an active competitor until the end of the show's original run. At the Bordon Charity Event, organised by the Plunderbird team in May 1999, it fought Cassius and Chaos in two separate battles.

Eubank the Mouse was retained by the Robot Wars crew during this time, and could often be seen on display in The Pits as part of an exhibition area set up during filming of later series.[2] It was also used as an obstacle in the test area for the Series 2 auditions, at one point being tipped onto its side and later being re-righted by G.B.H..[3]