The Firestorm Pullback with accessory

"The flipper of Firestorm has made it one of the most feared robots in Robot Wars. This replica pullback comes with a flamethrower accessory to keep the action hot and manic!"
— Official description from the Robot Wars Online Shop[1]

The pullback toy of Firestorm was made in the image of its real life Robot Wars counterpart. It is based upon Firestorm 3, the Robot Wars Extreme and Series 5 iteration of the machine.

It is armed with its powerful front-hinged flipper, activated by pulling the Firestorm logo back with one's finger. Strangely, Firestorm has a large ground clearance (mostly due to the toy having two small wheels and screws at the front that aren't present on the real machine) which means it cannot get under many pullbacks without outside help. The pullback also has two red aerials on its top, which can easily be snapped off, and secondhand Firestorm pullbacks typically lack the aerials.

Firestorm was part of the second phase of Robot Wars pullbacks and did not come with a piece of Gauntlet or Trial equipment, instead coming with a dual-flame thrower turret. The turrets would launch the flames by flicking switches on the arms of the turret.

The Firestorm pullback in its box 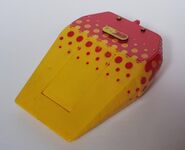 A typical pullback with aerials removed

The toy with its flipper open 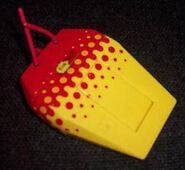 The toy with its flipper closed

Firestorm inside its packaging

Firestorm's aerials
Add a photo to this gallery

Retrieved from "https://robotwars.fandom.com/wiki/Firestorm/Pullback?oldid=301116"
Community content is available under CC-BY-SA unless otherwise noted.