Bladed Axe
Statistics correct as of its most recent appearance on the show, or if not applicable, qualification attempt.

GlitterBomb (simply Glitterbomb in official Robot Wars media) was a heavyweight robot which competed in Series 8 of Robot Wars. It lost its Group Battle in its qualifying heat after the weapons system for its axe failed, leaving it unable to self-right after getting flipped by Dantomkia. Its successor, GlitterBomb B, then qualified for Series 9, but was withdrawn due to failing to tech check in time, and it then completed filming as an unused reserve.

"Glitterbomb has a powerful pneumatic axe with up to 1.2 tonnes of force behind it, and can strike at up to 120mph. Its wheels are made from puncture-proof polyurethane foam and it has the ability to self-right from any position due to the strength and shape of its axe."
— Robot Wars: Build Your Own Robot

GlitterBomb was a pink, black and silver wedge-shaped robot armed with a pneumatic bladed axe, which swung at up to 120mph with 1.2 tonnes of force, and also allowed the robot to self-right from any angle. The robot was armoured in laser-cut Raex, and its shape was based on that of a stealth bomber.

GlitterBomb was built by James Baker and designed by his daughter April, who was the team captain. The robot was built from scratch in four weeks, after April used the Robot Wars Wiki to search for inspiration with designs. The team also own Series 6-7 and Extreme 2 competitor Edge Hog, which was used to compare dimensions, and Edge Hog's axe mechanism was implemented into GlitterBomb's design due to time constraints. However, the vast majority of GlitterBomb was an original build, using no more than 15kg of Edge Hog's parts.

"Due to a supplier being unable to do work in time, we were forced to use the axe link and supports from Edge Hog. We hated doing this, but we had no choice if we wanted to get to Robot Wars on time!"
— Team GlitterBomb

The robot's mascot was a pink fluffy bomb with eyes and a mouth, one of which was given away as part of a competition on their Facebook page.

GlitterBomb returned for the filming of Series 9, with a completely new robot using the name GlitterBomb B. The robot's body-shape was now much flatter, to support its upgraded weaponry. The armour was titanium of varying thickness, 5mm in areas[1], with 3mm Raex in key places. The robot utilises side skirts and a front wedge. Its speed was also increased from 10mph to 25mph.

GlitterBomb was armed with a twin set of axes. Each axe was powered by full bottle pressure CO2, each with a 100mm bore ram[1], and fires independently of the other. According to the team, each axe fires with 4000kg (4kN) of force. The axes are 1200mm in length, and weigh 11.5 kg each. Each axe was a single piece, custom made from titanium blocks, waterjet cut. The process of cutting each axe took seven hours.

GlitterBomb was significantly overweight at its first tech check, with both CO2 bottles and all optional armour attached, taking it 12kg over the 110kg limit, with it weighing 122kg[2] at that point. By removing optional armour plates and one of the axe weapons, GlitterBomb was reduced to 107kg in time for its second tech check[3], although at this point GlitterBomb had already missed its chance to compete, having been moved to the reserve list before it could enter the arena.

According to James Baker[4] that when the team returned the robot to their workshop, that the pneumatic components inside GlitterBomb B had been full of oil, adding approximately 9kg to the robot weight. This error was assumed by the team to be an oversight from the hydrostatic pressure testing process the day before arrival at Robot Wars, and once drained of all oil, the GlitterBomb B robot was within the 110kg weight limit with both axes. The team were then required only to remove one of their two CO2 bottles to make the required weight, with no other modifications required. As of February 2017, GlitterBomb weighed 110kg. One CO2 bottle had been removed, reducing the number of times the axe may be fired but without cost to the power. The robot ultimately never competed in any competitions for the next few years - its debut is scheduled to be at an Irish live event in late 2021.

GlitterBomb participated in Heat 3, facing fellow newcomers Overdozer, and veterans King B Remix and Dantomkia in its first round. GlitterBomb entered the battle having not tested its axe, and it became clear before activate was called that a part was leaking, and the 10-15 minute delay in starting the battle meant that the leak had a significant effect on GlitterBomb's axe.

"April's driving the weapon in the arena, so if it goes wrong, it's not my fault!"
— James Baker

GlitterBomb was immediately rammed by Dantomkia in an attempt by the yellow machine to flip the newcomers- however, they were not able to get a properly-positioned flip in. GlitterBomb then attacked Dantomkia, with its axe landing two blows, though this caused no visible damage. The axe never returned to its neutral position after this, reportedly due to a gas leak freezing the regulator. GlitterBomb used its wedge shape to overturn King B Remix, and pushed the immobile Overdozer into the arena wall, but Dantomkia flipped GlitterBomb over.

GlitterBomb had enough gas to self-right from this attack, although it was backed into the arena wall by King B Remix in the process, and GlitterBomb's axe did not retract after firing. Left with no weaponry in an unoccupied CPZ, Dantomkia flipped it up against a corner. A combination of GlitterBomb's lack of gas and the positioning of the wall here meant that GlitterBomb was unable to right itself. This meant GlitterBomb was left immobile, ending its Robot Wars run.

"By the time the fight had started, our regulator had frozen, so we got the two hits that we had left in the buffer tank, and then that was it, we had no more gas!"
— James Baker on his inactive axe

GlitterBomb was taken straight to the test arena after its battle, and proved to be in full working order, too late to make an impact.

GlitterBomb successfully qualified for Series 9, sporting a new design. It was intended to participate in the first heat of the series to be recorded - which was Heat 5 in broadcast order. However, the robot arrived overweight (approximately 122kg). Although the team eventually reduced GlitterBomb's weight to 107kg by removing one of its axes, GlitterBomb had already been moved onto the reserve list, and did not gain the opportunity to enter the arena. 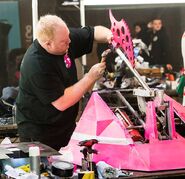 GlitterBomb in the pits 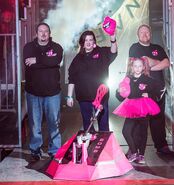 Front view of GlitterBomb with its team

Official photo of GlitterBomb in Series 8

The insides of GlitterBomb

Another shot of GlitterBomb's internals

Both GlitterBomb robots with the team's featherweights

Although GlitterBomb does not compete at live events, it made an appearance as a static display at Wales Comic Con, alongside Wheely Big Cheese. April also gave away autographs, beside the two robots.

Around the time of the televised run of Series 8, April appeared on CBBC's Newsround, promoting robotics and the TV show. April was briefly the centre of her own series on YouTube, April's Techtalk, which reviewed episodes of Robot Wars. April was also interviewed in an online article for BBC News, in July 2018.

In early 2018, Team GlitterBomb entered the Chinese TV show Clash Bots with a new heavyweight robot, Princess Of Wales, also known as Dragon Princess. Based upon the Welsh Dragon but painted pink, the robot used a conjoined weapon, connecting a front hammer and a rear lifter, also donning a decorative tiara. In its competition battle, it fought the Chinese flipper Atomic Bomb, and was quickly flipped over, but was righted by its Chinese opponent. It was able to lift Atomic Bomb briefly, but after being flipped again, Princess Of Wales could not self-right, and lost the battle. In two battles which were not aired on television, Princess Of Wales defeated the Chinese robot Bermuda Triangle and also the Team Danby entry Hyena.

Team GlitterBomb were accepted into the 2020 season of BattleBots with a new machine, Glitter Princess, and work was completed to the point of painting it. However, the team withdrew due to ongoing travel restrictions surrounding the COVID-19 pandemic.[5]

In February 2021, Team GlitterBomb purchased three items from the International Wreck Crew on eBay, which included the team's Techno Games swimming entry Stealth Stingray, an unused steel shell for Plunderbird 1 and the shell for the intended Plunderbird 6.[6] They were also given a piece of shrapnel from Plunderbird 4 which was signed by Mike Onslow.[7]

GlitterBomb appeared as a static display at RoboNerd in September 2021 alongside Wheely Big Cheese, The Mule and Stealth Stingray.