Spinning rim
Statistics correct as of its most recent appearance on the show, or if not applicable, qualification attempt.

"Gyrobot - From the word Gyrate which is to spin/revolve and to rotate in circles, and erm - robot!"
— Steve Wood, explaining the origins of Gyrobot's name

Gyrobot was a heavyweight robot which competed in Series 7 of Robot Wars. It reached the second round in its only appearance, losing to The Grim Reaper on a Judges' decision.

"Very quick at twenty miles an hour. The weapon consists of the thirty-five kilo outer ring spinning at 750rpm, but lack of experience could count."
— Jonathan Pearce

Gyrobot was an invertible rim spinner, driven by four wheels mounted in pairs on either side. Its main weapon was an outer steel ring weighing 35kg and spinning up to 750rpm, generating 40 kilojoules of energy.[1] Gyrobot could double its weapon's output by spinning itself on the spot, allowing the ring to run at up to 1,500rpm. The robot was powered by two 16Ah Hawker 12V batteries, had a high top speed of 20mph[2] and cost £2,000 to build.

The Series 7 incarnation incorporated a 25mm Lexan polycarbonate top panel as part of its armour, which along with spiked wheels lead to weight savings of 8kg by the time of its appearance on the show. Gyrobot's original steel top - painted gold along with the chassis and baseplate - was kept as a spare.[3] After taking damage from Fluffy in its qualifier for the series, a 4mm band of steel was added to the outer rim, making it 7mm thick. This modification brought Gyrobot very close to the weight limit; indeed, its weight was officially quoted as '100kg' in its only appearance.

In the televised broadcast of Series 7, Gyrobot appeared to be entered by a one-man team, with the team captain Steve Wood being the only member of the team seen on-screen. This approach was jokingly mocked by Craig Charles, but praised by Jayne Middlemiss. As a result, Steve Wood was the driver of Gyrobot, and is a mechanical design consultant by trade.

Despite not being present on-screen, Team Gyrobot did indeed feature a second team member throughout the Seventh Wars, Neil Solomon, who was also credited on Gyrobot's statistics board. Solomon consciously avoided the opportunity to appear on television, and chose not to be present for the team's interviews and televised battles, but nevertheless assisted with the maintenance of Gyrobot. Unfortunately, Neil Solomon died in 2016[4], only months before Steve Wood decided to apply for Series 9 with Gyrobot.

"Neil Solomon was actually there for the filming but didn't want to be on TV, so chose not to be available. He was there still lurking in the background offering a helping hand and offering moral support."
— Steve Wood comments on Neil Solomon in the Seventh Wars, dated 2013[5]

For its attempted entry into Series 9, Steve Wood recruited three new members of Team Gyrobot in 2016, including 3D print designer Damian Axford, although these team members would ultimately not get the chance to compete on Robot Wars.

Gyrobot first entered the design and build phase in December 2000, with an initial view to entering Series 5. Early CAD drawings suggest that interchangeable weapons (including a cluster of four smaller cutting discs) and conventional two or four-wheel drive systems were considered at various points during its development. The speed of the outer ring was also considerably slower at 250rpm (500rpm when the robot was spinning), a third of the maximum achievable with the Series 7 incarnation.[6]

According to a Wiltshire Gazette and Herald article, this incarnation of Gyrobot was intended to compete at the Cardiff qualifiers forming part of the Robot Wars Live Event tour. This also stated that it was to feature an outer Latex coating as a 'shock absorber' and had cost £1,500 up to this point.[7] However, Gyrobot was still being worked on by the time the Cardiff leg was underway. Despite being in a virtually complete state by the time the whole live tour had concluded, it was forced to withdraw from the remaining qualifiers due to unforeseen electrical issues.

"Unfortunately we couldn't make the auditions for series 5 this year due to unforseen last minute electrical problems. As you can see from the pictures on the left we were not that far away, maybe another couple of weeks and it would have been a different story. At least we should have lots of practice in by next year."
— Team Gyrobot website[3]

For Series 6, Gyrobot's weapon was upgraded to spin at 400rpm on its own, courtesy of a new gearbox and more resilient friction drive wheels. Interchangeable blades were also made for the outer rim to suit different opponents, and the robot began to adopt its familiar silver, gold and red paint scheme. In its qualifier for the series, Gyrobot fought Scrap Dragon, Shell Shock and The Stag. Gyrobot started promisingly, attacking The Stag's wheel and the immobile Shell Shock, even immobilising Scrap Dragon with a strong blow. However, it was gripped and pushed around by The Stag, and it broke down over the mock flame pit, thus failing to qualify for the Sixth Wars. Following this, Gyrobot underwent multiple upgrades to become the 'Mk II' incarnation that successfully applied for the following series.[8]

In its Series 7 qualifier, Gyrobot fought an invertible box-shaped robot, Terror Turtle, and Fluffy. After sustaining early damage from Fluffy, Gyrobot played a tactical fight, avoiding the action while accelerating its rim spinner. Once Fluffy had become immobilised, Gyrobot took the opportunity to cause damage to its opponents, and pushed Terror Turtle into the arena wall. Although Gyrobot lost the use of its spinner, it and Terror Turtle were the only robots with full mobility at the end of the battle, and Gyrobot was declared the winner of the battle, qualifying for the Seventh Wars. Fluffy and Terror Turtle also qualified alongside it.

After choosing not to apply for Series 8 due to time constraints, Gyrobot was upgraded to enter Series 9. Its weapon now weighed a hefty 42.5kg, which would have made it the heaviest spinning weapon in Robot Wars, and the robot's teeth were upgraded to use Inconel hard edge welding. The team even 3D printed safety guards for these teeth, designed two interchangeable top panels, and applied under a team of four people. However, Gyrobot ultimately was not chosen to appear in the series. Steve Wood then elected not to enter Series 10 in response to this.

"I decided not to enter the 10th Wars due to being rejected for the 9th wars. I spent a lot of money and time upgrading Gyrobot in an attempt to make an old robot competitive in the new wars (Lipo, upgrade, new style weapon teeth, new speed controllers etc) only to be told that Robot Wars was "looking for innovation and the use of new tech". I guess they wanted to give some of the new builders a chance. I may try again in the future, who knows."
— Steve Wood[9]

"Will this be employed later in the series, or be picking up a Robot Wars giro?"
— Jonathan Pearce as Gyrobot enters the arena

Gyrobot competed in Heat B, where it was due to face Jackson Wallop, the successor to Attila the Drum, Killerkat, the successor to Black Widow, and the third seed Terrorhurtz in its first round battle. However, Terrorhurtz was disqualified before the battle began due to arriving at the studio in an unfinished state, leaving the three remaining robots to fight on without it.

In the second round, Gyrobot fought Series 3 returnee The Grim Reaper in a full five-minute bout.

"For me, it’s all The Grim Reaper, and the Gyrobot, defensively, erm, now what do you call that tactic? I think it’s called… running away!"
— Jonathan Pearce, unimpressed with Gyrobot’s lack of aggression as it gets its weapon up to speed

This compelled The Grim Reaper to strike Gyrobot with its rear panel, before flipping and chasing it around the arena once again, with Gyrobot driving into the wall and Cassius Chrome while doing so. Gyrobot was flipped a few more times by The Grim Reaper – at one point getting pinned between Sir Killalot and the wall - before ramming The Grim Reaper a few times as ‘cease’ was called. Despite Gyrobot landing a blow on The Grim Reaper’s side that damaged one of its panels, the judges’ decision went against it, as The Grim Reaper proved more aggressive throughout. This eliminated Gyrobot from the Seventh Wars. 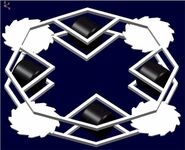 An early CAD design for Gyrobot

An early CAD design for Gyrobot, with four wheels

The insides of the Series 6 version of Gyrobot

Gyrobot in motion, armoured in steel

Gyrobot is loaded into a car for transport to Series 7

Damage caused to The Grim Reaper by Gyrobot

After the Seventh Wars, Gyrobot was upgraded to spin and accelerate faster, also gaining studded wheels and an improved battery life, with the intention of entering another series of Robot Wars. However, the show entered its 12-year hiatus before it could compete with the upgrades. Gyrobot remained operational over this period, but could not compete at live events due to the restrictions affecting spinning weapons prior to 2017. The Fighting Robots Association website, however, suggests that it regularly fought at Roaming Robots and Robot Crusade events in the period following the show's entry into hiatus.[2]

Although Gyrobot was upgraded again in 2016 with the intention of entering Series 9, it has still yet to reappear in combat. Its most recent appearance came at the June 2019 Extreme Robots Guildford event, albeit as a static display alongside Wheely Big Cheese and Gabriel 2.

In 2017, Team Gyrobot built an antweight called Vibrant, which was an invertible 'brushbot' using no wheels, and was armed with twin horizontal bar spinners. The robot relies entirely on the vibration of the spinners for forward movement and steering, and is capable of using torque steering for faster turning through adjustments to the speed of each weapon motor.[10]