Flipper
Statistics correct as of its most recent appearance on the show, or if not applicable, qualification attempt.

"The difference between men and boys, is the prize for their toys."
— Eric Corton, reciting the team's motto

Hard was the name given to a pair of Belgian robots entered by Team Compactory into both the Dutch and UK Series of Robot Wars. The earliest known version of Hard was intended to enter Dutch Robot Wars: Series 2, but was withdrawn before filming began. In its place, the team were given a loanerbot which assumed the name of the robot it replaced. Hard lost in the first round to Neater.

The team's actual robot first appeared in Series 7 of Robot Wars. In its only UK Series appearance, it reached the second round of its heat, losing to Bulldog Breed there, and represented Belgium in The Third World Championship, where it lost in the first round. Hard was built by Team Compactory, with help from Team Mad Science and Team KODOX roboteer Mario "Maddox" de Jongh, who lived near two of the team members in Belgium.

Hard, as a loanerbot, used various parts from other loanerbots owned by Robot Wars. It was armed with an electrically powered axe salvaged from Tut Tut as its primary weapon, while it used the lifting arm of Vert-I-Go as a battering ram, as it was not actuated. These weapons however, were not particularly powerful. It weighed 98kg, and ran on 2x 24V motors. Eric Corton purported that Hard was shaped like a bell because it was Belgian. Hard's armour was relatively thin, and it had a high ground clearance on all sides.

"With their muscles from Brussels, can they survive?"
— Jonathan Pearce introduces Hard prior to its Series 7, Round 2 battle

The version of Hard seen in Series 7 was a small wedge-shaped robot with a full pressure flipping arm which was designed to run either way up. The latter was achieved through the robot running on a custom-built locomotive system, featuring small, wide wheels resembling rollers. Hard had four of these wheels in total, with two being mounted at top of the robot, and two at the bottom, allowing the robot to be invertible. The robot had decent speed and manoeuvrability and was low to the ground, but the flipper was not very powerful and often struggled to flip over other robots, while the wheels were exposed from the top. The wheels were driven by two Bosch 750W electric motors attached to a four-wheel drive gearbox, controlled via Mytras speed controllers. Hard's main feature was its very thick armour, consisting of 4mm RVS stainless steel.

For its planned entry into Dutch Series 2, Hard featured a conventional two-wheel drive system with wide tyres in place of the locomotive system it would adopt for Series 7; however, this incarnation broke down shortly before filming began, and was replaced by the loanerbot.

Competing using a loanerbot provided by the producers, Hard found itself out-manoeuvred by Neater in its opening match.

Neater attacked Hard from the side and pierced its canister, disabling its axe. Hard skidded over to the arena wall, and Neater nudged it into a CPZ. Growler then clamped Hard's axe and pulled the loanerbot onto its side. After Hard was counted out by Refbot, Growler came in and crumpled its armour with his jaws. Hard's axe had become hooked over the side of the arena, and the house robots could not get it loose, so it remained there until cease was called.

Hard competed in Heat K, where it fought veterans Velocirippa, Kat 3, and newcomer T-Wrecks in its first-round battle.

It was immediately bumped by Velocirippa, but dodged Kat 3 and pursued T-Wrecks across the arena, only to be rammed into the latter by Velocirippa. In spite of this, Hard pushed T-Wrecks into Mr. Psycho, leaving it vulnerable to the House Robot's hammer as it backed away and tried to push Kat 3 from the side. It eventually stopped on the Floor Flipper shortly after Kat 3 got its axe stuck through the Flipper, before getting underneath, lifting and ramming Velocirippa into the wall. Hard proceeded to throw Velocirippa into Mr. Psycho's CPZ, and got underneath it once again as the two robots met in the centre of the arena. Later on, Hard pushed T-Wrecks towards Cassius Chrome's CPZ, but was pushed away by Cassius Chrome himself before lifting, pushing and throwing Velocirippa off the floor again. After briefly pushing T-Wrecks a third time, it resumed its attacks on Velocirippa, pushing it over the closed pit and into T-Wrecks.

Hard bumped T-Wrecks away before momentarily dodging Kat 3. It then pushed and buffeted T-Wrecks back across the arena into Cassius Chrome, avoiding a flame jet and the opened pit in the process. While pursuing the escaping T-Wrecks, Hard bumped into Velocirippa again, whose damaged steering left it unable to turn sideways, before backing T-Wrecks into Kat 3. It momentarily pushed both opponents back, before Velocirippa reversed up Hard's wedge again and momentarily rolled onto its side. Backing away, Hard almost flipped T-Wrecks over as the latter became stuck on Kat 3's wedge, but a shove from Velocirippa forced T-Wrecks to become stuck on its back. Hard capitalised on this by backing T-Wrecks into the pit, before bumping and pushing Velocirippa into it as the latter began losing mobility. With this, it progressed to the second round, along with Kat 3.

"The big problem is to stay in the arena."
— Frank Van Riet

In the opening seconds, it dodged Bulldog Breed's initial charge, but was pushed and flipped a full 360 degrees by the latter. Hard responded by pushing Bulldog Breed from the side and into the wall, but lost mobility almost immediately, and was thrown towards, against and alongside the wall several times by Bulldog Breed. Eventually, it was counted out by Refbot, before being hammered, picked up and carried across the arena by Mr. Psycho. Mr. Psycho dropped Hard before placing it on the Floor Flipper, where it was thrown end-to-end across the arena floor. Hard was picked up once more by Mr. Psycho, before being placed on the Drop Zone, having a cooker dropped onto it and sustaining one last hammer blow from Mr. Psycho immediately before 'cease' was called.

"I tell you, their machine's fairly strong! The old cooker trick, on top of them – barely a scratch, but hard-beaten!"
— Jonathan Pearce as a cooker is dropped on Hard

While it remained externally unscathed, Hard was eliminated from the main competition of the Seventh Wars; it was later revealed that one of its batteries had run out of power at the start of the battle.

"One of the batteries in Hard died while we drove in the arena...It was already dead before Bulldog Breed even touched us."
— Frank Van Riet

Representing Belgium, Hard also competed in The Third World Championship, which was filmed and broadcast alongside the main series. In its qualifier – shown as the Special Event of Heat J, broadcast before Heat K (the heat it would compete in) – it faced New Zealand's representative Riptilion; before the battle, Team Compactory expressed concerns that the latter's size would prove especially problematic for Hard's flipping arm.

"Well he's so large that we think it might be quite difficult to flip him over...we're not even sure if he fits in the pit"
— Jan Huygh on Riptilion

Immediately, Hard pursued and bumped into the slow-starting Riptilion, withstanding a blow from the latter's spinner while struggling to get underneath it. Nevertheless, it eventually got underneath, pushed and flicked Riptilion into the wall, before pushing it across the arena into a CPZ while flipping it a second time. The two competitors escaped, before Hard pushed Riptilion into the wall again and manoeuvred it towards – and into - another empty CPZ. In doing so, it sustained damage from Riptilion's spinning bar, before being rammed underneath the latter by Cassius Chrome. However, Hard escaped, with Riptilion becoming immobilised after being attacked by both Cassius Chrome and Growler. It spun round and met Riptilion again as the latter was placed over the closed pit by Growler, and pinned Riptilion against the wall just as it was being counted out. Hard pushed and lifted Riptilion one more time after it was thrown by the Floor Flipper, with 'cease' being called afterwards. As a result, it successfully qualified for the Third World Championship.

In the first round of the World Championship itself, Hard fought US representative Spartacus, as well as Sri Lankan machine – and regular UK Series competitor – Supernova.

At the start, it drove towards Supernova as the latter attacked – and was deflected by – Spartacus, before weaving around and bumping into the latter. However, Hard then sustained a side-on blow from Supernova's disc, and lost drive power after attempting to push and lift Supernova from the side. Immobilised, it played no further part as Supernova continued to inflict severe damage to Spartacus, and despite firing its flipping arm several times to show signs of mobility, was counted out by Refbot. Dead Metal proceeded to slice into Hard's back armour a few times, causing several sparks to fly, all while pushing it into Sgt. Bash's CPZ. As with its previous defeat, Hard was left on the Drop Zone by Dead Metal, where it had a set of computer parts dropped onto it.

"Real 'byte'... and 'ram' power, in those computer screens."
— Jonathan Pearce as Hard succumbs to the Drop Zone again

Hard flicked part of one of the monitors away with its flipping arm, before 'cease' was eventually called. With this, it was eliminated from the Third World Championship, along with the heavily-damaged Spartacus.

NOTE: One of Hard's losses was achieved with a loanerbot.

One of Hard's locomotive systems, made out of aluminium core, surrounded by rubber tubing

Team Compactory with Hard in Series 7 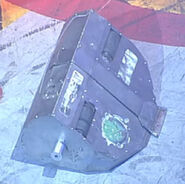 Hard in the arena in Series 7

Team Compactory work on Hard in the Pits during Series 7

The internals of the Series 7 version of Hard

Team Compactory with FeatherHard, runner-up in the 2006 UK Featherweight Championship

Between Dutch Series 2 and the Seventh Wars, Hard competed at the Dutch Robot Games in 2003. Its only competition fight was a three-way rumble against Edge Hog and Mute, which was won by Edge Hog. However, Hard did win a non-competition rumble over Ripper and Das Gepäck, then later won a six-way Flipper Frenzy over Gravity, Philipper 2, Scraptosaur, Sater 2 and Hammerhead 2[1].

After Series 7, Hard continued to fight on the live events circuit all over Europe, attending events such as the Dutch Robot Games and those hosted by organisations such as Roaming Robots. Its last appearance was at the 2006 Fighting Robots UK Championships, where it fell in the group stages against Terrorhurtz after having its gas pipe severed[2], and then subsequently was pitted in a grudge match with Velocirippa. Hard also fell in the first round of the International Championship hosted at the same event where its flipper broke off after being flipped repeatedly by Kronic. The team did however finish runner-up in the 2006 Featherweight UK Championships with their featherweight FeatherHard.

Since then, Hard has been sold to Team Compactory's friends, Team Alien Destructor.