6" diameter saw
Statistics correct as of its most recent appearance on the show, or if not applicable, qualification attempt.

"This machine can operate even when it's flipped upside-down, on 163cm tracks made from motorcycle chains. The batteries, motors and speed controller come from a wheelchair, the chassis frame is steel, the 6-inch diameter front saw has bit, but it cost just twenty-eight pounds to build!"
— Jonathan Pearce introduces Limpet

Limpet was a tracked robot that competed in Series 2 of Robot Wars. It was the initial entry from Team 13, and reached the Trial stage in its only appearance, where it was eliminated after knocking only twenty-three skittles down.

Limpet was a tracked, box-wedge shaped robot with a steel chassis and armour, powered by two 24v wheelchair motors and equipped with a 6-inch circular saw, although the saw was removed to bring the robot within the weight limit. Its tracks were 1.63m long and made out of motorcycle chains and allowed it to run inverted, making Limpet one of the first invertible robots to appear on the show. Limpet was painted white with black stripes resembling a zebra, had a top speed of 4mph and cost £28 to build.

Limpet was entered into Robot Wars by the Hinckley-based team of John Denny (captain and driver), and John Freeman. The team would later become known as Team 13 Black, and eventually just Team 13, while competing in various seasons with 13 Black and Heavy Metal. John Denny would be the captain for all appearances, while John Freeman was only present alongside Limpet.

Limpet qualified for the Second Wars after running the obstacle course at the auditions, and performed adequately enough to be selected for the series.

Limpet Mk 2 was being built for Series 3, similar in shape and size to the original Limpet, but with new and improved tracks and a small lifting mechanism. However, as it was not finished by the end of qualifying, an application could not be submitted for Series 3. The team would not enter Series 4 either, before later entering the Fifth Wars with 13 Black.

Irrespective of its unfinished state, Limpet MK2 was touted to compete in the show's first attempt at a Tag Team style event following on from Series 3, partnered with Sting 2. The event was ultimately cancelled due to a serious behind-the-scenes accident, though Limpet MK2 and Sting 2 would evolve into become established series semi-finalists with 13 Black and S3 respectively.

Before it could compete in Heat G, Limpet's saw had to be removed to bring its weight below the maximum 80 kg limit. Additionally, the team stuck a small piece of French baguette to the robot's back in an attempt to have it set alight by Sergeant Bash during its Gauntlet run, as well as fireproofing Limpet's internals using foil from the studio canteen.

In its Gauntlet run, Limpet trundled out of the starting zone, and drove up the see-saw. Sir Killalot pinned Limpet against the wall as it cleared the see-saw, driving on top of Limpet's tracks and armour as Limpet struggled to get away.

"Takes on Killalot? Crushed by Killalot!"
— Jonathan Pearce as Sir Killalot drives up and over Limpet

Sir Killalot backed down as Dead Metal grabbed hold of Limpet, before snapping its left track with his jaws. Despite losing mobility, Limpet still travelled a distance of 10.8m, enough for it to qualify for the Trial stage.

"We were looking forward to some toast, actually, but we didn't get that far!"
— John Denny

In the Skittles Trial, Limpet was the last robot to run, and had a chance of progressing to the Arena stage after defending champion Roadblock had only knocked down thirty-four barrels. It started slowly but ran down a reasonable stack of barrels in the opening drives. However, Limpet then blew a speed controller and lost the ability to turn and right, meaning it could knock down very few barrels after this[1]. Limpet only managed to knock down twenty-three barrels by the time 'cease' was called, so it was eliminated. John Denny notes that even if Limpet had outscored Roadblock, it would not have been able to continue in the competition[2].

The original version of Limpet from Robot Wars resides in Team 13's garden, its internals having since been removed and its tracks rusted solid. According to the team, its empty chassis often acted as a home for mice during the winter seasons. Limpet's successor, 13 Black, has also been retired since the end of the original series of Robot Wars, and both machines appeared as a static display piece at Robonerd in 2018.

John Denny later built Limpet XS MK 1 & Limpet XS MK 2, a beetleweight version of Limpet with roughly the same design as the original robot. In its first event, the Beetleweight World Series in July 2014, it lost both of its battles to Anvil and Spinza respectively, before returning to compete at the Robots Live! event in Stevenage later that year. There, it won the beetleweight event by beating Newton in the final. Following conversion from four- to six-wheel drive, Limpet XS repeated this feat at The Iron Games at Wolverhampton in February 2015, again defeating Newton in the final round, and continues to fight in beetleweight events with considerable 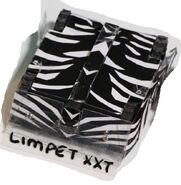 Limpet XS would also compete in the online web-series Bugglebots, adopting the name of its heavyweight namesake. There, it won its first battle of the competition by flipping Hard Knox over while its opponent's axe was not functioning, before winning a Judges' decision over Mini Spinny in the second round after both robots fell in the pit at the same time. In the heat final, Limpet fought Snappy, and emerged victorious after forcing Craig Croucher's beetleweight into the pit, advancing to the Grand Final. In its first battle of the Grand Final, Limpet deflected the Meltybrain spinner of SCD into the pit, and pitted the esteemed Captain Doom in its semi-final. In the Grand Final, Limpet faced the egg beater of K2, but lost drive on one side, and despite its best efforts, a very close Judges' decision went against the favour of Limpet, resigning it to second place.

In addition to Limpet XS, Team 13 have also built additional replicas of Limpet for other weight classes. An antweight version, Limpet XXT, and a featherweight, Limpet XL, both compete at live events, the latter being completed in 2017 as a collaboration between Team 13 and Team PS-All-Stars. Limpet XL made its competition debut at the Robots Live! event in Stevenage in October 2017, where it finished every whiteboard fight over the two days, winning one of them.

In 2014, John Denny stated on the Official Robot Wars Facebook page that he was going to rebuild or update Limpet so it can return to heavyweight combat in 2015. Although the robot would not return that year, work on a new version commenced as the younger John Denny was determined for it to return. In August 2018, John Denny revealed that the chassis and drive had been completed for the new version, Limpet MK 3, which had performed a test drive but would not be completed until the following year.[3]

On June 22nd 2019, Team 13 completed the new heavyweight version of Limpet, scaling up the design of their successful beetleweight by using a four-wheel drive and solid black HDPE top and front armour. This version of Limpet debuted at the Robots Live! event held in Grantham that weekend, but suffered from issues with its drive system and lost its only battle, a three-way melee against Iron-Awe 5 and Behemoth.

" I went to the kitchens for some foil to protect the insides of limpet, while I was there I grabbed some bread and stuck it on the aerial to make some toast. Nemesis were next to us in the pits and suddenly everyone was involved"
— John Denny on Facebook