"A metallic machine of mayhem based on the fearsome house robot known as Matilda. Build this warrior with real metal parts or use the customised extras to create a new robot of your own."
— Official description from the Robot Wars Online Shop[1]

The Matilda Pitstop Kit contained a model of the Robot Wars House Robot Matilda, which could be constructed from various interchangeable parts.

The set is a pullback model of Matilda with an interchangeable diagonal-mounted disc, a rear mounted axe and two alternate side panels. The disc could be wound up using one's finger and released to make it spin. To fit the disc, you need to take Matilda apart at the front and remove the tusks. The hornhead slips down be, then in order to fit the axeback, Matilda must be taken apart. When the axe is fitted, the spikes that are normally on her back must be removed. Matilda's axe is like X-Terminator 2's, in that it needs to be pulled down for it to fire. Like the pullback version, the Pitstop version's tusks are powered by the lever above the two horns.

The toy with no front shell 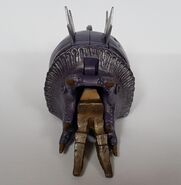 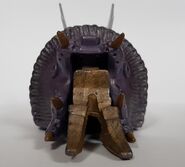 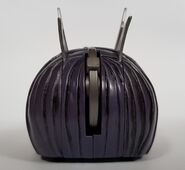 Retrieved from "https://robotwars.fandom.com/wiki/Matilda/Pitstop?oldid=309059"
Community content is available under CC-BY-SA unless otherwise noted.