Steel Ramming Spike
Statistics correct as of its most recent appearance on the show, or if not applicable, qualification attempt.

Mr Nasty was a competitor robot that entered Series 6 of Robot Wars as well as the New Blood Championship in the second series of Robot Wars Extreme. It did not enjoy great success, being eliminated in the first round in Series 6 and losing to Mute in the second round of the Extreme 2 New Blood Championship. Following the introduction of the active weapons rule in Series 7, Mr Nasty was unable to take part, and thus did not return following these appearances.

Mr Nasty was a silver box-shaped robot presumed to have been based upon Tornado, with four kart wheels powered by 750W motors and equipped with a static hardened steel ramming spike as its main weapon. It was made significantly more compact than Tornado, to allow for the weight of its motors and 6mm armour, and was the most powerful robot in Series 6, at 300W. However, Mr Nasty was slightly slower than the robot that inspired it, was susceptible to being easily pushed around and flipped, and proved unreliable throughout its appearances.

Mr Nasty was entered into Series 6 by a family team based in Aylesbury, Buckinghamshire. The team was captained by Perry Watkins, the builder of Mr Nasty, who was joined by his sons Dan and Jack Watkins.

Perry Watkins was the man who built Wind-Up, the world's smallest car. [1]

At the qualifiers for the Sixth Wars, Mr Nasty was drawn in a battle with Anarchy, Brutus Maximus and Ruf Ruf Dougal. The winner of the battle is as yet unknown, however all four participants would go on to qualify for the main competition.

"Well, if this has been modeled on Tornado, they've made a good choice!"
— Jonathan Pearce on the possible inspiration for Mr Nasty

Mr Nasty was placed in Heat C of the Sixth Wars, and was drawn up against Series 5 heat finalist Crushtacean and fellow newcomers Doctor Fist and future success Dantomkia in the first round of the Heat.

Mr Nasty started quickly in this battle, but it was soon grabbed by Crushtacean and was pushed around the arena. Mr Nasty was then released, but it then suddenly stopped moving. This was caused by Crushtacean's claws removing Mr Nasty's aerial.

Refbot nudged Mr Nasty and it still could not move, Dantomkia then pushed and flipped Mr Nasty against the arena side wall, where even if it had been working, it could not free itself. Then Mr Nasty was flipped away from the arena side wall by Dantomkia, where Mr Nasty laid dormant until Refbot closed in. Mr Nasty was then subsequently counted out, and was pitted with Doctor Fist by the House Robots Sgt. Bash and Sir Killalot.

"Yeah, well, we didn't get much of a chance to be very evil..."
— Dan Watkins in the pits, after the fight

Mr Nasty entered the New Blood Championship and was drawn against Niterider and Maximus in Heat A.

"Very powerful, heavy armour, could live up to its name!"
— Jonathan Pearce as Mr Nasty enters the Arena

The battle started tentatively, but then Mr Nasty rammed Maximus and pushed it all the way down the arena and into the arena side wall. Mr Nasty then repeatedly rammed Maximus and caused some damage to Maximus with its spike. Mr Nasty then pushed Maximus into the pit release button and then into an arena side wall angle grinder. Mr Nasty continued its assault against Maximus causing more damage. Meanwhile Niterider had been counted out by the Refbot, then Mr Nasty pitted Maximus, though this was irrelevant, as both robots were already through to the second round of the heat.

In the second round, Mr Nasty was placed up against the front-hinged flipper of Mute.

Mute started as the quicker machine in this battle with Mr Nasty ramming it, but Mr Nasty was then flipped. Mr Nasty was then flipped again and it seemed to lose drive in two of its wheels and it drove around in circles. Dead Metal then dragged Mr Nasty onto the flame pit. Meanwhile Sgt. Bash and Refbot were battling each other. Due to this squabble between the House Robots, Mr Nasty was not counted out, and eventually regained full mobility later into the battle. Nevertheless, the Judges ruled in favour of the more active Mute, eliminating Mr Nasty at this stage.

Mr Nasty in the pits for Series 6 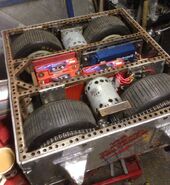 Like many Robot Wars competitors, the team entered Techno Games under the name Team All Torque. They entered a weaponless Mr Nasty into the Sumo tournament under the name All Torque (not to be confused with Team Torque's entry in Robot Wars), and reached the final, beating the reigning Sumo champion Big Bro in the process.

In 2011, Mr Nasty was sold to Team ENGIMA who had also previously bought The Steel Avenger and the Series 6 version of X-Terminator, with the intentions of entering it into events hosted by Robots Live! and Roaming Robots.

In 2015, Mr Nasty was "sold" on the show Storage Hunters, along with a number of other Robot Wars Live Event competitors, such as The Steel Avenger and Beast.[2]

Mr Nasty was due to compete in the first live event of the new Robot Wars at Portsmouth in March 2013, but was forced to withdraw before the event began. It made its debut in June 2014 at Guildford. From late 2014, Mr Nasty was reserved as a Retro class robot along with other old robots like Stinger, Schumey Too & Bulldog Breed as well as its former teammates X-Terminator & The Steel Avenger. It fought in those battles at events until November 2015 when it was retired. John Findlay stripped out its inner workings for making a new heavyweight robot in 2016, so the shell of Mr Nasty is now used as a static display.