The Panic Attack pullback with accessories

"This popular championship robot comes complete with goal and ball for some serious scoring action, wars style. With its all action flipper and staggering acceleration, this toy will strike fear into the motorised hearts of the other pullbacks."
— Official description from the Robot Wars Online Shop[1]

The pullback toy of the Welsh robot Panic Attack was made in the image of its real life counterpart. It is mostly based on the Series 4 version of Panic Attack, but the side skirts are those of the Series 5 version.

It is armed with lifting forks that are moved by sliding the red light. Its self-righting mechanism is apparent, but fixed in position. Strangely, it does not feature Panic Attack's signature spider painted on top.

Also, Panic Attack is one of the three robots to have a pitstop toy released.

Included with the Panic Attack pullback were the ball and goal from the Robotic Soccer competition.

Panic Attack in its packaging 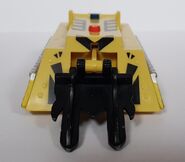 Retrieved from "https://robotwars.fandom.com/wiki/Panic_Attack/Pullback?oldid=301106"
Community content is available under CC-BY-SA unless otherwise noted.