High speed disc
Statistics correct as of its most recent appearance on the show, or if not applicable, qualification attempt.

Panzer was a tracked robot that competed in Series 3 of Robot Wars. Panzer won its first two rounds in Series 3 before losing in the Heat Final against Evil Weevil after failing to move. Panzer would later appear in Extreme 1 as Panzer Wraith, but it lost its Mayhem battle to X-Terminator, despite immobilising Cataclysmic Variabot.

Panzer was known for its large tracks, made of rubber, which also provided invertibility. It was a small box-shaped robot made from aluminium. For weaponry, it was armed with an interchangeable array including a 4000-5000RPM disc cutter, and static spikes, but only the spikes were used on the show. The top of the robot was decorated with yellow and black warning stripes. Panzer's pushing power was high, and its spikes caused reasonable damage to its opponents.

Panzer Wraith's shape was more wedge-like in design, though still featured a high, curved ground clearance at both ends. Its high speed disc, now painted red with more accentuated teeth, was located on the taller end of the robot. The warning stripes of the previous design were swapped for a logo of the robot's disc. However the robot was extremely slow for its era, at 5mph, and was also 11kg below the weight limit, which failed to provide the advantage of higher speed.

While Panzer earned its place in the Third Wars by running an obstacle course, Panzer Wraith never qualified again once combat qualifiers were introduced. In its attempt to enter Series 4, Panzer Wraith fought Small Torque. Unfortunately, its slow speed proved a disadvantage as Small Torque's agility and disc weapon gained itself enough aggression. Panzer Wraith also faced pressure from Shunt, before becoming immobilized on the flame grille, and thus was not chosen to compete, despite most Series 3 Heat Finalists earning seeded positions in the Fourth Wars.

In Heat L of the Third Wars, newcomer Panzer were drawn up against Undertaker, a robot created by the same team who competed with Havoc in Series 2, in its first round battle of the heat. Panzer drove up Undertaker, which was then bounced around by the Arena spikes. Undertaker could not move properly because of control difficulties, but the battle still went to a judges' decision, however the judges did give the victory to Panzer, putting the newcomer through to the next round of the Heat.

Panzer then went up against another veteran in the second round, Challenger 2. Throughout the battle, Panzer's rubber tracks continually drove up Challenger 2's low wedge shape, but finally Panzer managed to steer Challenger 2 towards the pit, and then into it, putting it through to the next round of the Heat.

In the Heat Final, Panzer went up against newcomer Evil Weevil. However, Panzer never moved off the start. Its opponent Evil Weevil ran into the immobilised Panzer several times, before Panzer was approached and picked up by House Robot Sir Killalot. The rest of the House Robots closed in, and torched the defeated machine.

In the first series of Extreme, Panzer Wraith singularly competed in a Mayhem qualifier battle against veteran X-Terminator and newcomer Cataclysmic Variabot for a right to fight in the first Annihilator of the series.

Once out of the Arena, and within range of the torn aerial, the robot was in full working order. The team of Cataclysmic Variabot offered the safety link to the Panzer Wraith team as a trophy of the 'half-victory'. 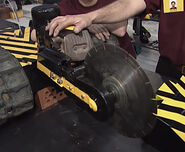 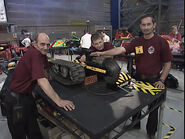 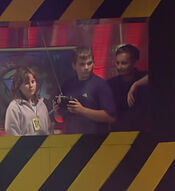 The team in Extreme 1

Official shot of Panzer in Series 3

Like many teams on Robot Wars, the team also entered Techno Games.

The first time they entered was in Techno Games 2002 where they competed along side Technomoth in the football competition, with a robot called Ravioli, where they lost to the eventual winners Sprocket and Storm Chaser.

The team returned with the original Panzer machine and competed in the Assault Course of Techno Games 2003 under the name Rash where it, rather ironically, beat Technomoth in Round 1. It then lost in the second round to Sugar Plum Fairy.