Robot Wars Wiki
Register
Don't have an account?
Sign In
Advertisement
in: UK Series competitors, Robots which debuted in Series 9, Robots with Front-hinged Flippers,
and 4 more

Front-hinged flipper
Statistics correct as of its most recent appearance on the show, or if not applicable, qualification attempt.

"Team captain, Shane, has built a brand new flipper. Can his innovative design "push" them to victory?"
— Angela Scanlon introduces Push to Exit

Push to Exit was a robot which competed in Series 9-10 of Robot Wars, entered by Team S.Tek. In Series 9, it was defeated in its Group Battle after being immobilised by PP3D. In Series 10, it was able to immobilise Hobgoblin, but ultimately lost its Group Battle to Magnetar, and lost to Expulsion in the Robot Redemption. The robot's branding referenced the idea of an ejector button.

"Push to Exit is the only front-hinge flipper in the series' main competition. It runs on low-pressure pneumatics and features a one-of-a-kind 'Swan Drive' drive system that's easy to bolt on and off and makes the robot fast and agile."
— Robot Wars: Build Your Own Robot on Push to Exit in Series 9

Push to Exit was based on Shane Swan’s most successful live competitor, Envy, using the same setup of motors, Roboteq speed controllers, and drive system. Envy in turn was inspired by Firestorm[1]. Like Envy, Push to Exit was armed with a front-hinged 10-bar flipper, running on low pressure CO2, which also functioned as the robot’s self-righting mechanism. Its armour was mainly comprised from 3-6mm HARDOX, with elements of aluminium and titanium also utilised.

Push to Exit was one of the fastest robots in Series 9 and 10 with a top speed of 24mph, and was also among the shortest, at 250mm in height. However, it had a high ground clearance at the rear, and was immobilised with relative ease, suggesting unreliability. In Series 10, the robot was decorated with red spikes, and ropes could be attached to the robot in an effort to entangle spinning weapons. The spikes were also intended to act as form of entanglement, but it failed to work. Push to Exit also gained a buffer tank to help flip robots, which meant the 28.8V OptiPower lithium polymer batteries needed to be placed in the middle of the machine[2].

Push to Exit was entered by Team S.Tek, a Lincolnshire-based team captained by Shane Swan, an arcade manager. Shane Swan was the lead builder of the robot, and also drove Push to Exit in its Series 10 battles. The robot's driver in Series 9 was 32-year old business consultant Stuart Barnwell, the former driver of Pussycat in Series 7 and the second series of Extreme, as part of Team Kat. 52-year old Paul Morton was also present on the team in Series 9, having previously been part of Team S.Tek over a decade ago when they debuted with Hell's Teeth, and Paul's 7-year old daughter Amelie competed the team, the youngest member of any team in Series 9.

Although they were not part of the televised team in Series 9, two YouTube content creators from Northern Ireland, Anthony Murney and Stephen McCulla (owners of the twopennymilk 8908 and Votesaxon07 channels, respectively) joined the backstage team in order to create a video review of Push to Exit. After Barnwell and the Mortons left Team S.Tek after Series 9, both Murney and McCulla were able to join the televised team for Series 10, with both being involved in repairing the machine. Stephen McCulla was also the weapons operator of Push to Exit in Series 10, and both team members were very vocal in interviews, bringing a humorous angle to the team.

Push to Exit competed in Heat 2, where Team S.Tek fought fellow heat finalists from the previous series in Team Saint, with their new robot Cherub, as well as PP3D and Draven, also veterans of the last series.

Push to Exit made the most aggressive start of the four competing machines, as it shot across the arena towards Draven. Push to Exit missed its opponent and crashed into the arena wall, but quickly turned around and came in with another strong drive, barging Draven out of the way and shooting under Cherub, which flew up and over Push to Exit as a result.

"It's a good onslaught early on from Push to Exit."
— Jonathan Pearce

Push to Exit then drove at Cherub and slipped underneath its front, before missing with an attempted flip as Cherub slid out the flipper's range. After a period out of the action, Push to Exit continued its duel with Cherub, but just as it got underneath its opponent, PP3D came in with a shattering hit which sent Push to Exit hurtling across the arena floor. After the hit, Push to Exit showed no signs of movement, and was counted out along with Draven - which had just suffered terminal damage at the hands of PP3D and Shunt. This left Cherub and PP3D as the only two robots mobile, with both progressing to the Head-to-Head round, while Push to Exit exited the competition.

Angela Scanlon: "Wasn't quite the exit you were hoping for, was it?"
Shane Swan: "Not quite, no."
Angela Scanlon: "What happened? Did a pin come out? It looked like you just lost your drive."
Stuart Barnwell: "It took a hit, and then I think a wire's come out - we just lost power straight away."
— The post-battle interview

Push to Exit competed in Series 10 in Heat 5. In its Group Battle, it fought Hobgoblin and Magnetar, and entered the arena with entanglement devices as a counter-measure to the spinners of both opponents. Before the battle, Shane Swan spoke to Dara Ó Briain about his Crufts-winning dog, and Anthony Murney's antweight robot Rusty sat on top of Push to Exit alongside various pictures of dogs.

"He wants to show that a front-hinge flipper can work - ooh! Shane, you've been flipped yourself, mightily, by the Floor Flipper!"
— Jonathan Pearce

The impact almost caused Push to Exit's flipper to stop working, and Push to Exit slid across the arena floor towards Shunt. Its underside received an axe blow from the House Robot, before it was pushed away again, this time stopping over the pit. Unable to self-right due to its broken weapon in spite of the drive system still working, Push to Exit was counted out, along with Hobgoblin. Following this, Push to Exit needed significant repairs to take place after the damage it received from Shunt and Magnetar[3].

Push to Exit's earlier KO in the Group Battle was rewarded when it faced school-based entry Expulsion, which had finished third in the heat's other Group Battle. For this, it entered the arena without its entanglement devices being reapplied.

Push to Exit began more tentatively than before, driving into Expulsion and pushing them towards Dead Metal. However, Push to Exit was showing signs of intermission. Push to Exit charged into Expulsion again, knocking them away, before turning and taking some damage from Expulsion's spinner head-on. The attack ended up beaching Expulsion on its flipper, but with Push to Exit's weapon showing no signs of life, Expulsion managed to drive off unharmed.

"They're trying to get the flipper to work, and it's not, so I wonder if they've still got pneumatic problems. They can just dodge away, but look, the controls are out of the hand...I think they have a problem here."
— Jonathan Pearce

Push to Exit slowly turned round, still showing mobility issues as Expulsion attacked its rear with the spinner. Push to Exit came to a halt near the Floor Flipper, just as Expulsion was flipped over by the Floor Flipper. Push to Exit twisted round on the spot and hit the overturned Expulsion, but then stopped moving completely. With neither machine showing any movement, cease was called and the battle went to a Judges' decision, where Stephen McCulla and Anthony Murney jokingly consoled each other's tears. The decision was unanimous in favour of Expulsion, and Push to Exit was eliminated from the competition, leading Shane Swan to question his future in robotics. Stephen McCulla threw his shoe at Push to Exit as the team wheeled their robot away. Off screen Team S.Tek managed to discover the reason as to why Push to Exit broke down - a wire in their speed controller had been cut[4].

Push to Exit enters the arena in Series 9 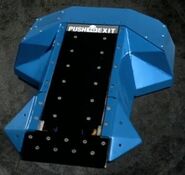 Push to Exit in Series 9

Push to Exit in the arena in Series 10

Push to Exit in the pits at Series 10

Push to Exit in Series 10, after its fight with Expulsion

As the two share a very similar design, Push to Exit is considered to be the successor to Shane Swan’s previous front-hinged flipper, Envy. For more information, refer to Team S.Tek.

In March 2018, following the announcement of the cancellation of Robot Wars for a second time, Shane Swan retired from roboteering and stripped Push to Exit of its electronics before selling them. Push to Exit's empty shell was then given to Stephen McCulla and is now on display in Stephen's collection room as a centrepiece of his Robot Wars collection. This was first revealed at the end of Stephen's Heat E review.[5]