Battles in Robot Wars can sometimes last the full 3-5 minutes, but on some occasions, it is over after the first attack. After the first impact, the robot may either be damaged, or simply overturned and unable to self-right. A quick immobilisation does not necessarily signal the point in which the robot is officially eliminated, which is only marked when the House Robots intervene, Refbot's counter reaches ten or 'Cease' is called. However, there are several recognised cases of a very quick immobilisation. All notable occasions of an immobilisation being caused in five seconds or less are listed below.

A quick immobilisation is defined as an attack within the first five seconds of a battle which knocks out or otherwise immobilises the opponent.

The losing robot must: 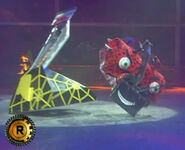 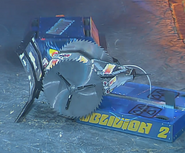 Terrorhurtz knocks Jellyfish out with its axe

Joker knocks out Spawn Again with just one hit

Sir Chromalot is toppled by Firestorm 3

Panic Attack darts away from the immobile Killertron 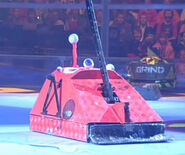 ICU's aerial is removed after Storm 2 charged it

Retrieved from "https://robotwars.fandom.com/wiki/Quickest_Immobilisations_in_Robot_Wars?oldid=321760"
Community content is available under CC-BY-SA unless otherwise noted.