Robot Wars Wiki
Register
Don't have an account?
Sign In
Advertisement
in: UK Series competitors, Robots from Hampshire, Robots with more Wins than Losses,
and 10 more

Four-bar lifting arm and interchangeable chainsaw/triple-pointed spike
Statistics correct as of its most recent appearance on the show, or if not applicable, qualification attempt.

"Aluminium and steel, a hydraulic lift and spike; the hydraulics from a saloon car braking system. Will this Raizer Blade be all over its opponents like a rash?"
— Jonathan Pearce introduces Raizer Blade in Series 4

Raizer Blade was the second entry from Team Kill Dozer, which competed in Series 3 and Series 4 of Robot Wars. It lost in the second round in Series 3 to Suicidal Tendencies, but reached the Heat Final in Series 4, losing to Hypno-Disc.

The team had also previously competed in Series 2 with Kill Dozer.

Raizer Blade was a green and blue box wedge-shaped robot with a front plough-like wedge and a reptilian-inspired paint scheme. The robot was made out of aluminium and steel, featured a drive system powered by hydraulics from saloon car brakes and was armed with a large four-bar lifting arm as its main weapon. The robot was powered by two 750W motors running at 24V. The arm operated at a pressure of 2400psi and was powered by an AVS pump from a Ford Granada, which the robot was powerful enough to pull on its own. Some of the parts were taken from the team's previous entry, Kill Dozer.

"Because we were using hydraulics the mounting points and main load bearing parts were made from steel, as was the lifting arm. The wheels would have to take the full load of our robot plus any lifted weight (another robot) so the whole bottom part of the chassis was also made from steel tube. Our lifting arm is operated by the converted 2 ton bottle jack used in Killdozer."
— The Raizer Blade website on the construction of Raizer Blade[1]

Raizer Blade featured two rear weapons throughout its appearances: a petrol-powered chainsaw which could raise and lower in Series 3, and a bludgeoning spike for Series 4, which the team called the 'Crucifix of Doom'. Both weapons were interchangeable in Series 3, but only the spike was used in Series 4 in an attempt to improve Raizer Blade's manoeuvrability and to save weight for improvements elsewhere within the robot. As a result of these improvements, Raizer Blade was 1.4 kilos heavier in Series 4 than in Series 3.

The robot cost £718 to build. The wheels and tyres were provided by Kart Sport of Caxton, Marshall Aerospace provided off-cuts of aluminium tubing and sheet which the team used to build some of the chassis and body panels, and Cycle King in Cambridge provided the team with an number of front and rear sprockets from racing cycles and chain for the drive train.

The robot had a top speed of 12mph, and had a high ground clearance at the rear, 50mm, which went down on a gradient to 2mm at the front[2]. In Series 4, two spikes were added, one to each side of the robot, to prevent Raizer Blade become stuck on its side. The tip of the flipper was also widened.

"Raizer Blade, captained by Paul Hart the driver, Steve Scotcher the tactical expert and Howard Andrews with the beard - his job is, uh, panicking, he says."
— Jonathan Pearce runs down the team lineup in Series 4

They were also assisted by numerous others such as Paul Margiotta, who painted the intricate reptilian artwork on Raizer Blade's armour panels, Mark Goude, who helped them team build wooden mock-ups, and Mick Fordham, who let the team use his workshop[4].

Raizer Blade first appeared in Heat A of the Third Wars, and faced newcomers Red Dragon in its first round battle.

"Got a hydraulic lift on the front, it's got a chainsaw on the back. So we'll lift them up, turn them over, cut 'em up."
— Paul Hart during the introduction

"...meanwhile, Raizer Blade is now on the spikes, I think, trying to bring the chainsaw into play."
— Jonathan Pearce

"Raizer Blade being pursued by the House Robots, needs to get out of that CPZ area!"
— Jonathan Pearce

Meanwhile, Red Dragon suddenly broke down on its own. Sergeant Bash grabbed it with his jaw, pulling it back, and Sir Killalot proceeded to hook and spin the immobilised Red Dragon over with his lance before dumping it into the pit, allowing Raizer Blade through to the second round. Noticeably during this, Raizer Blade's chainsaw broke off.

Philippa Forrester: "Right, I've got one question to ask, and I want you to be honest - did you win by skill?"
Steve Scotcher: "Yeah naturally! Is there any other way?"
Paul Hart: "I think a little bit of both!"
— Post-battle interview

In the second round, it faced another newcomer, Suicidal Tendencies.

"Good robot, looks nice. Unfortunately, runs upside down, so bit of a problem if we turn them over, just gonna keep going! Might be able to do something with the chainsaw and the tracks, though."
— Paul Hart on his opponent

"...and very much, Raizer Blade on top and in control!"
— Jonathan Pearce as Raizer Blade pushes Suicidal Tendencies around

"Well they’re doing a brilliant job – OH MY GOODNESS ME! Raizer Blade… has driven itself onto the verge of the pit! What a turn up this is! Completely in control and Raizer Blade in real problems here now!"
— Jonathan Pearce as Raizer Blade gets itself stuck on the edge of the pit

Paul Hart: "We tried to push them in the pit, if we'd had just left them and drove around, we'd have won! We tried to get them in the pit, make a bit of a game of it, but we..."
Philippa Forrester: "Ended up in the pit!"
Paul Hart: "If Killalot had got us out earlier, we wouldn't have been disqualified."
Philippa Forrester: "Ah, but did Killalot mean to get you out?"
Steve Scotcher: "Yes, course he did! He's our mate!"
— Post-battle interview

"We're hoping to do well, if we get mullered by the House Robots, we're happy with that as well!"
— Paul Hart during Raizer Blade's introduction

Raizer Blade returned for the Fourth Wars, competing in Heat P. In its first round battle, it faced The Predator and the Series 3 runner-up Hypno-Disc, the second seed of the tournament.

"There is a key robot in this melee, and I certainly wouldn't want to be Raizer Blade! ... Say a couple of prayers!"
— Julia Reed before the battle

Hypno-Disc reversed, but Raizer Blade couldn't move away, and Hypno-Disc drove back at Raizer Blade, hitting the side and cutting a large gash in it, then hit The Predator. Raizer Blade tried spinning as Hypno-Disc went back after it, but Hypno-Disc hit it with the spinning disc, knocking it aside.

"Are Raizer Blade just sitting there? I wonder if it’s been immobilised on the arena floor – no! Just rather cunningly - or stupidly - trying to draw Hypno-Disc on!"
— Jonathan Pearce observes Raizer Blade’s lack of forward mobility following its attack on Hypno-Disc

"Hypno-Disc batters everything! The only saving grace for Raizer Blade is that it sustained less damage, so Raizer Blade and Hypno-Disc go through"
— Craig Charles after the battle

Following repairs to the damage sustained from Hypno-Disc – including the addition of a speed controller borrowed from Dead Metal - Raizer Blade faced series newcomer Terror-Bull in the second round.

Julia Reed: "Well, it's been touch and go getting here, hasn't it, because you took a lot of damage in the melee from Hypno-Disc. What's the situation now, how strong are you?"
Paul Hart: "Well, we tried to repair as much of the damage as we can, we hope we're good enough to get through this next round and then fight them again! Hopefully win!"
— Pre-Round 2 interview

"Well, Terror-Bull, turned into mincemeat! Raizer Blade through by the skin of their teeth!"
— Craig Charles announces Raizer Blade’s progression

In the Heat Final, Raizer Blade faced Hypno-Disc for the second time. Leading up to the battle, the team faced difficulty with getting the robot’s speed controllers working properly in the testing area, despite having changed speed controllers twice, the robot kept losing drive on one side. Paul Hart then revealed to Julia Reed just before the battle that its hydraulic systems was leaking, the team didn't have a pump, and they still couldn't get the speed controller working.

Paul Hart: "Basically, she's bleeding to death! The hydraulics systems is leaking like a sieve, we haven't got a pump, 'cause the gas bits have all gone on that. We've got half a speed controller, so we're hoping to keep it running just long enough to run away, but I'll be very lucky if we survive this intact!"
Julia Reed: "Or even get onto the arena floor! But the audience are cheering for you, and they want carnage!"
Paul Hart: "We were hoping to give them a good show, we wanna give them a good show, so we're here! If we get smashed to pieces, that's fine but we gave them a good show."
— Paul Hart explains the problems to Julia Reed

Raizer Blade was actually booed by many of the audience whilst being introduced before the battle.

At the start, Raizer Blade failed to move forwards properly, turning back and forth. Hypno-Disc rushed over and struck the side with its flywheel, cutting a large gash in it.

"This is like putting the heavyweight boxing champion of the world in against .... my Gran."
— Jonathan Pearce as the Heat Final begins

As Hypno-Disc reversed to get its flywheel up to speed, Raizer Blade tried spinning on the spot, but Hypno-Disc cautiously approached and hit Raizer Blade. This impact stopped Raizer Blade's spinning and completely immobilised it, with Raizer Blade rolling to a halt. Hypno-Disc hit the back, then the side, knocking Raizer Blade to one of the wall-mounted flame jets. The Raizer Blade team knew their robot was immobile, and gave up trying to control it.

""That's it from us!", that's almost the message, "Well, we've done all we can, now let's just retreat onto the arena flames!" Raizer Blade has the steering problems, the pneumatic problems. It's now a question of how much damage Hypno-Disc wants to cause, because you can see quite clearly, it's all over for Raizer Blade!"
— Jonathan Pearce as Raizer Blade lies immobile

Hypno-Disc held back as it got its spinning disc up to full speed, then hit the side of Raizer blade, ripping its whole right-hand side panel off. Hypno-Disc hit the side panel, sending it flying aside, and hit the back of Raizer Blade. Hypno-Disc retreated as the House Robots came in, with Dead Metal grabbing it from behind and pulling it, then Sir Killalot grabbed it with his claw and spinning it around.

"What a shame guys, you kind of, you lost your drive, you lost your power, didn't you? ... And then, losing you power and being up against Hypno-Disc! The gods were not smiling on you!"
— Craig Charles to the Raizer Blade team after the battle

It was later revealed after the Heat Final that the Raizer Blade and Hypno-Disc teams had held a Gentleman's Agreement, which ensured that Raizer Blade would be immobilised without sustaining too much damage from Hypno-Disc’s disc.

"Raizer Blade were brave and top sportsmen to continue in to final battle. Knowing his difficulties we agreed to be more stand-off-ish, in the time honoured robot wars 'Gentleman's Agreement'"
— Hypno-Disc website[5]

The original prototype for Raizer Blade

Raizer Blade without its armour 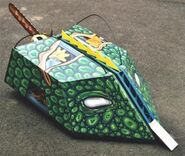 Raizer Blade ahead of Series 3 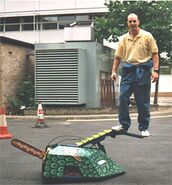 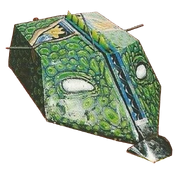 Raizer Blade remained active around the time of Series 4, making an appearance at a meetup held at Oundle Mill in 2001, alongside other robots such as 101 and Anthrax.

"The robot needed to be quick but also it needed lots of pushing power. Using wood allowed us to make very quick changes to the positioning of motors and gears as they were just screwed own using wood screws."
— The Raizer Blade website on building a prototype[7]