Robot Wars Wiki
Register
Don't have an account?
Sign In
Advertisement
in: UK Series competitors, Robots from the Channel Islands, Robots with Spikes,
and 7 more

Spikes, Flail
Statistics correct as of its most recent appearance on the show, or if not applicable, qualification attempt.

"Due to its size and the intended aggression it pointed more towards a rat than a mouse. The latin name for the common rat is Rattus Rattus and so a name was found."
— The team's website

Rattus Rattus was a robot which competed exclusively in Series 3 of Robot Wars. Rattus Rattus won its first battle against S.M.I.D.S.Y. but lost to the experienced Dreadnaut in Round 2.

"Upon reading material from Mentorn it became apparent that a novel idea was wanted to help get the machine accepted into the show. As we looked at the shape of the chassis and what body was going to be needed it began to look rather rodent like."
— The team's website

Rattus Rattus was shaped like a rodent, with a pointed-wedge front and chassis from an old desk. It had six wheels as it was considered "easier" to steer, as it had tank style control and the weight would be balanced over the middle wheels. [1]. Its armament included two spikes at the front, and a flail at the rear. It was originally going to be over 2.5 metres long, but the team was forced to cut it in half upon discovering that a robot that size would not fit in their car. Despite this, it was still the longest in its heat.

Rattus Rattus was originally covered in brown fur but the fur was not permitted after a test. It took 3 days to remove the fur and add a different coating. However Rattus Rattus still maintained its Dark brown colour scheme,[2] though it appeared black on television.

"A chap from the health and safety department asked for a small piece of fur to perform a flame test on it. It failed. He told me it produced poisonous gases and would need some sort of coating to stop it from catching fire. Back in Guernsey we took a piece of fur to the fire brigade and asked their opinion. He agreed that the fur was not fire proof and would need a coating. He sent us down to Securicor who have what we need. The man at Securicor took a piece of fur to run a test. He coated it that night and the next day he tried the same test as the fire brigade. The phone call from him told us we needed a different covering."
— Rattus Rattus website

Rattus Rattus was said to have its name derived from the Latin name of the Common Rat (or Brown Rat). In actual fact, Rattus rattus is the Latin name of the closely related House Rat (or Black Rat), with the Common Rat's actual Latin name being Rattus norvegicus. The team jokingly claimed that Rattus Rattus was from the fourteenth century, and had been responsible for the spread of the bubonic plague. Despite the name confusion, Rattus rattus was indeed the rat species that helped spread the plague.

"After seeing the robot Killer Hurtz in series 2 Gary was inspired to get involved and started designing a chassis that would overcome many of the hurdles that Robot Wars puts in front of its competitors."
— The Rattus Rattus website on Gary Pike

Rattus Rattus was entered by a two man team from Guernsey, consisting of team captain Gary Pike, who drove the robot, and Rick Ozanne, the technical and electronic advisor. The Rattus Rattus team were the only ever team to come from the Channel Islands.

Rattus Rattus qualified for Series 3 by running the obstacle course. It went through a slight change when it attempted qualification in later seasons, with the flail being removed and the armour being changed in order to withstand attacks from House Robots - otherwise the design remained similar.

"The compere made a mention of the incredible power of our axe, and you had to feel a bit sorry for the defenceless Rattus Rattus. After a quick dance around around the arena, Dominator's axe buried itself 8 inches deep in the back of RR, (missing the aerial by 1/2 an inch!) Another short dance, and the axe struck again, with Dominator poised to push the impaled RR into the pit, when the removable link jumped out, and Dominator was powerless, forfeiting the bout to RR! However, with a bit of leading from the compere, the audience voted that Dominator II should be eligible to go through to the next stage as well!"
— The Dominator 2 website on the Series 4 qualifier battle (edited)[3]

Rattus Rattus also attempted to qualify for Series 5. Its only known qualifier battle was a six-way melee which also included Granny's Revenge, Purple Predator, Razer, Roobarb and Shunt[4], but ultimately this did not lead to Rattus Rattus earning a place in the Fifth Wars.

Rattus Rattus took part in the final heat of the Third Wars. Rattus Rattus was placed up against fellow newcomers S.M.I.D.S.Y. in the first round of the heat.

After a cautious start to the battle, Rattus Rattus managed to get in underneath its opponent. Rattus Rattus was then bounced by the arena floor spike a few times before driving up and over S.M.I.D.S.Y.'s top. Rattus Rattus then pushed S.M.I.D.S.Y. onto the arena spike, and then into Dead Metal's CPZ, before colliding with Dead Metal itself, dislodging its own body shell upon impact. Rattus Rattus then carelessly drove over the flame pit and began smoking, but S.M.I.D.S.Y. meanwhile was limping itself, and was eventually pushed into the pit of oblivion by Dead Metal, therefore putting Rattus Rattus through to the next round of the heat. After the fight, the team revealed that they had fitted a block of wood at the tip of the wedge, with the vain hope that it would keep the shell in place.

In the second round, Rattus Rattus was placed up against Robot Wars veterans Dreadnaut.

"They say it came from the 14th century - well, the engines probably ground to a halt long ago since then."
— Jonathan Pearce

Dreadnaut rammed into it a few times, before the house robots moved in and began attacking Rattus Rattus, with Dead Metal in particular causing major damage to the outer shell. Cease was eventually called and Rattus Rattus was eliminated from the competition.

"It suffered from its own plague!"
— The Rattus Rattus team blame the bubonic plague for their robot's demise 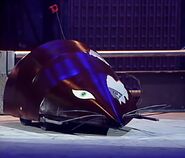 Rattus Rattus in the pits with its shell on the floor