Robot the Bruce
(Built by both teams)

Pneumatic steel tongue with built in front-hinged flipper
Statistics correct as of its most recent appearance on the show, or if not applicable, qualification attempt.

"It's called Recyclopse because it's made entirely out of recycled materials, from scrapyards. It has a quite lethal weapon, which comes out and then flips up."
— Rex Garrod

Recyclopse was the first robot from Team Cassius, which was entered in Series 1. It was notable as the first competitor to use a flipping weapon of any kind, as well as to flip another robot over with an active weapon, doing so to House Robot Matilda.

In its only series, Recyclopse reached the Grand Final after winning its Heat Final through a controversial judges' decision against Mortis. However, it became immobilised there after one of its drive chains broke following an attack by Roadblock, and lost the First Wars to the latter.

Recyclopse was a black dome-shaped machine with a pneumatic steel wedge "tongue" that would shoot out of the front of the robot, with a reach of over 90cm, and flip its opponents over.

"The shape of Recyclops {sic} was another good point as its hemispherical glass fiber shell meant that if any pointy weapons had been used that would just have glanced off or just absorbed the energy."
— Oliver Steeples on the Griffon website[1]

Recyclopse was made almost entirely of recycled materials, with the only thing purchased being the wheels. As a result, Recyclopse was the first robot to appear on the show that cost less than £100. The domed shape defended Recyclopse well against pointed attacks, but the robot was quite unreliable as its drive chain, which was originally a bike chain, kept slipping. Due to this, Recyclopse broke down in three of its five appearances.

At 79.5kg, Recyclopse was just 0.1kg over the original Heavyweight weight limit.

Recyclopse was entered by the Mickfield-based duo of Rex Garrod and Simon West. The team captain Rex Garrod was the driver of Recyclopse, with Simon West assisting in repairs of the machine. George Francis of Team Chaos also assisted in constructing the robot, and likewise, Rex Garrod helped to build their machine Robot The Bruce. Prior to Robot Wars, Rex Garrod was best-known for presenting the TV show The Secret Life of Machines, and for building Brum, an artificially intelligent self-driven car, which was the star of its own TV series.

Recyclopse's name was a portmanteau using the words "recycle" and "Cyclops". The "recycl-" part of the name was a reference to the fact the robot was built from recycled materials, whilst the "-cyclopse" part of the name came from the Cyclops monsters from Greek mythology, which were a race of one-eyed giants. Recyclopse was designed with one large eye in keeping with this theme.

Recyclopse attended the Series 1 auditions alongside all other fellow Series 1 competitors, four weeks before filming. Recyclopse was complete by the time it attended the auditions with Rex Garrod detailing the specs and how it works to producers and inspectors. However, the batteries had worn out and died meaning Recyclopse was unlikely able to perform in the makeshift labyrith or perform any other task involving the robot.

At the Gauntlet stage, Recyclopse first went for the ramp, but as soon as it tried to go up, the tongue got stuck, so Recyclopse reversed to take another route. As Recyclopse turned, Shunt came in, but Recyclopse pushed past it and drove down the House Robot route, but was blocked by Sergeant Bash. Shunt came in behind, trapping Recyclopse. Recyclopse tried to use its tongue to push Bash out of the way, but this pushed itself back. However, Sergeant Bash reversed, allowing Recyclopse to charge down the course, its tongue still sticking out as Bash chased it. Matilda was waiting by the finish line, but she could do little to stop Recyclopse, which pushed past the House Robot to complete the Gauntlet.

Having completed the Gauntlet in the fastest time, Recyclopse came first on the leader board.

In the Trial, the five remaining robots played the robot version of British Bulldog.

Recyclopse started by steadily driving forward, veering to the left side of the arena. However, as it approached the pyramid, it ground to a halt and stopped before passing the pyramid. Recyclopse fired out its tongue as Matilda came in. Matilda nudged it a little, then left it. After being attacked by Mortis, which had crossed the line first, Matilda came back to attack Recyclopse, ramming it a couple of times. Matilda became stuck on the tongue of Recyclopse, and Mortis reversed into Matilda and pushed it fully onto the tongue, allowing Recyclopse to flip the House Robot over, the first time a competitor managed to flip over a House Robot with an active weapon. Despite being immobile, Recyclopse's progress was still enough to go through to the Arena stage, as Detonator had barely moved from its starting position due to battery failure.

After the Trial, it was revealed that Recyclopse had stopped moving due to a broken chain.

In the Arena stage, Recyclopse was drawn against Scrapper.

The two robots slowly moved towards each other. As Scrapper closed in, it turned on the spot, and when it got close to its opponent, it swerved past it. As Scrapper turned around, Recyclopse reversed to get in a good position to charge straight at Scrapper, but in doing so, it drove close to the CPZ. Dead Metal came out, hitting Recyclopse with its claws, then turning to hit it with the scorpion tail. Scrapper turned to attack Recyclopse, but turned too far and exposed its side to its opponent. Recyclopse shot forward, turning Scrapper on its side using its body, rather than its flipper.

"You stick your tongue out at me and I'll wink at you! Very nice, indeed, as the two robots come together. Manoeuvring for position at the moment. Don't go broadside- Oh, no, no, no, you shouldn't have done that! Broadside and the tongue came out!"
— Jonathan Pearce's entire commentary in the fight.

"Oh well, that's a pity, I wish I could have had a bit of a better fight, really."
— Rex Garrod after the battle

In the Heat Final, Recyclopse fought Mortis. Before the final, Mortis' main shaft for the axe broke, leaving the axe useless. The team altered Mortis to act as a battering ram.

Both robots jumped into action, but neither attacked the other during the opening moments. Mortis dodged Recyclopse's charge, and then reversed into the round robot, pushing past it. Mortis drove away from Recyclopse, driving down to the bottom of the arena, driving over the edge of Matilda's CPZ as it turned around. Recyclopse followed Mortis, and in doing so, drove into Matilda's CPZ. It managed to reverse out before Matilda attacked, but as it turned to attack Mortis, it drove through the CPZ, and the House Robot pushed Recyclopse out of the CPZ but did not attack further. Meanwhile, Mortis reversed past Matilda, but became impaled on the spikes in Matilda's CPZ. Mortis was sliced by Matilda's chainsaw and bumped by the spikes. Recyclopse came in to try and get under Mortis using its pneumatic tongue, but it found it difficult due to the spikes, and Mortis escaped. It rammed Recyclopse from the rear and drove beneath it, piggybacking it around the arena, and dropping it since Recyclopse's defensive round body helped to cancel out the attack.

"Good defensive work by Recyclopse, holding on there. Rex Garrod managing to spin away, good work by him!"
— Jonathan Pearce

Recyclopse tried to ram Mortis, but could not move it. Mortis drove away, and the two then clashed head-on in the arena centre. Recyclopse's first charge against Mortis did nothing, so it reversed before coming in for another charge, this time with the tongue extended. However, Recyclopse missed as it charged at Mortis, and Mortis got underneath and rammed Recyclopse into the side wall. However, Shunt pushed Mortis onto the sidebars where it became stuck. Recyclopse tried to escape from the wedge of Mortis and managed to move forward, but the tongue was fully extended, so Recyclopse could not get down. Shunt axed Mortis just as cease was called. The match went to the judges, who voted in favour of Recyclopse. This decision was popular in the pits, but Random Violence Technologies strongly disagreed with it.

"They're not working - we're working. We pushed them out, we had all the attacks, and we think we should've won."
— Chris Sorsby

"We could not really see a way to decide and kept asking for it to be a draw. But, in those days draws were not allowed and so we were forced to make a decision with a very aggressive crowd screaming in our ears and pushing us into the barriers. We decided on Recyclopse but none of us felt good about it."
— Noel Sharkey

Recyclopse was through to the Grand Final, where it fought Roadblock, Robot The Bruce, Cunning Plan, Bodyhammer and T.R.A.C.I.E..

"From Heat 2, Recyclopse with the extending tongue, licking all opponents!"
— Jonathan Pearce introduces Recyclopse for the Grand Final

"There's the chain off Recyclopse! And that attack by Roadblock had paid off, Recyclopse is out!"
— Jonathan Pearce

The battle eventually went to a judges' decision, but having been immobilised, Recyclopse was not considered for the decision, which was won by Roadblock.

NOTE: Recyclopse's Gauntlet and Trial runs are not included 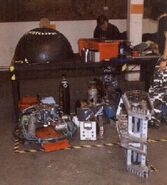 Recyclopse, with its shell removed, with Mortis in the pits 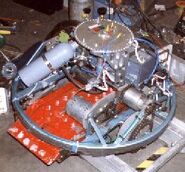 The insides of Recyclopse, from the back

The insides of Recyclopse, from the side 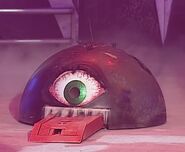 Recyclopse with its tongue extended

Recyclopse was retired after The First Wars, with a good deal of its electronics being recycled into Rex Garrod's next entry, the similarly successful Cassius, and the shell was used to cover the water pump at the bottom of Rex Garrod's garden for a while, before being moved to Garrod's workshop, where it sits alongside all three versions of Cassius.