"When the action starts you can be sure that Refbot will be in the thick of it, ensuring that fairplay is being upheld. This pullback comes with an exclusive battle board.The time has come to ACTIVATE!"
— Official description from the Robot Wars Online Shop[1]

The Refbot pullback was based upon the Series 4 version of its real life counterpart.

Because the pullback replicates the Series 4 version of Refbot, the toy does not feature the electronic countdown board and the electronic carding system, both introduced in Extreme 1.

The two arms moved with the aid of a button on its back. Pressing the button made the pincer arm move upwards, the extinguisher arm move downwards and the head turn to the right. The pincer was fixed in position. It also featured a "Bump and Change Direction" style drive, like the Shunt pullback, meaning if it hit an object it would either change direction or reverse.

Refbot came bundled with a Scoreboard accessory. This had several panels with robot's names, such as Razer and Panic Attack, which could be stuck to the board. The board had two sides, one for showing the top seeds, and another for showing the line up for battles. The panels could be swapped to change the line ups.

The Refbot pullback in its box 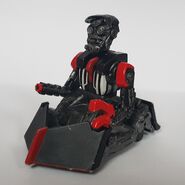 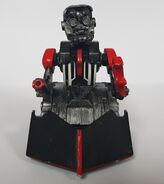 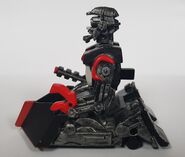 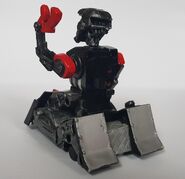 Retrieved from "https://robotwars.fandom.com/wiki/Refbot/Pullback?oldid=301102"
Community content is available under CC-BY-SA unless otherwise noted.