Robot Wars Wiki
Register
Don't have an account?
Sign In
Advertisement
in: Articles in need of rewriting, Robots from Lanarkshire, UK Series competitors,
and 11 more

Edit
For the US Series competitor, see The Revolutionist.

Spinning drum
Statistics correct as of its most recent appearance on the show, or if not applicable, qualification attempt.

Revolution 2 was an invertible machine with two-wheel drive, two castors on top to help it run inverted and armed with three large thirty-six inch spinning blades which Team Revolution claimed would spin at just under 200mph. However, in order to accommodate what they claimed to be "the fastest and biggest weapon in Robot Wars", Revolution 2 had very thin polycarbonate armour and a tubular plate steel frame, which was very susceptible to being damaged easily. It was not reliable, either, and its rotating blades got impaled every time they struck another robot's armour due to a lack of reverse gear and sufficient torque in the weapon. The blades were thin in Series 6 and then thicker in Extreme 2.

Revolution 3 was a completely different invertible design to its predecessor. It was a box-shaped, four-wheel drive robot with tougher aluminium, polycarbonate and polypropylene armour and interchangeable weapons similar to those found on Tornado, including a 2500rpm eight-toothed spinning drum (referred to as a rotating flywheel on the show) and a scoop. This version could reach a top speed of 12 mph and pull a car, but was very unreliable throughout its appearance in Series 7.

Revolution 2 and Revolution 3 were both entered by the static team of Roger Webb and Gordon Anderson, known as Team Revolution. The two team members were local to East Kilbride in Scotland, and had a unique dynamic with Philippa Forrester who was very critical of the weaponry on Revolution 2.

The original Revolution robot had previously failed to qualify for The Fifth Wars.

Revolution 2 attended the qualifiers for the Sixth Wars, and was placed in a battle with Ming 3, The Hassocks Hog and Devil Rider.

"The others scheduled for our battle were two first timers like myself, and one experienced roboteer, Ming. The first timers were "Immortalis" and "Revolution 2" and it wasn't long before they came round to have a look at the Hog and have a chat. Both teams were very friendly and suggested quietly that because Ming was an experienced roboteer, that maybe we should all work together and all go for Ming at the start of the battle. Once he was immobilised, it would be a free for all, with no holes barred. It seemed like a good plan, but it seemed that Ming had similar ideas as well, because he approached the other teams and suggested that he and they ganged up against the other two robots. I presume this is a fairly common situation in Robot Wars, and I wasn't too surprised."
— The Hassocks Hog website

At the start of the fight, a hit from Devil Rider's bar spinner took out Ming 3's removable link[1], and Devil Rider itself became stuck on the uneven floor, leaving the fight as largely a head-to-head between Revolution 2 and The Hassocks Hog. Revolution 2 caused superficial damage, but also took damage to its blades and spent the remainder of the fight caught on top of its opponent. Cease was called with both robots still mobile, and The Hassocks Hog was declared the winner. However, both Revolution 2 and Ming 3 received discretionary places in the main series.

"As the voice called "three, two, one, activate," everyone went for Ming. We had a few collisions before one of the others managed to whip Ming's safety link out leaving him completely immobilised. ... "Immortalis" quickly became stationary next to Ming, and it was then up to "Revolution" and me to battle it out. My flipper was a bit sluggish by now, possibly because the pneumatics were getting cold with all the flipping we were trying to do. It still operated, but only lifted the others rather than flipping them. It was interesting to then listen to us both talking to each other in the booth as we battled to the end. We would bump into each other and then say "oops, sorry about that", but the battle had to go on. "Revolution" managed to get a few good hits on us, but had severely buckled its spinning blades in the process. We still bashed into each other a bit before after one collision he half climbed on top of me, getting hooked on our tail. We dragged him about a bit, while Jonathan tried to shake him of by operating the tail. I eventually backed into the arena side wall which loosened him enough for the tail to finally push him off and back onto the arena floor. It was this final manoeuvre that gave us some extra "control" points. When they called "cease" we were the only two robots still mobile, and it wasn't until we descended from the booth did we know we had won."
— The Hassocks Hog website

"Well, in Series 6 you made fun of our blades, so we went home and rebuilt them. They're bigger, they're faster, they're heavier and they're stronger!"
— Roger Webb on the improved weaponry

Revolution 2 returned for the New Blood tournament, with stronger blades that were now thicker and modified so that the top casters could be fitted without pushing the robot over the weight limit. It fought Direct Action and eventual winner Storm 2 and in its first round battle. Revolution 2 started the battle by staying out of the way, before landing a strong hit on the now cornered Direct Action. Revolution 2 also landed a glancing blow on Storm 2, before it was then attacked by Direct Action, and stopped spinning. Then both Storm 2 and Direct Action struck Revolution, but no damage was caused. Revolution avoided further damage as it evaded its opposition. Direct Action was eliminated after driving down the pit, so Revolution 2 went through to Round 2 along with Storm 2.

The second round saw Revolution 2 drawn against fellow Series 6 competitor ICU. When the battle began, ICU drove straight into the blades and merely bounced off, before pushing Revolution 2 into the angle grinders. Revolution 2 had control problems, and drove straight into the opposite arena wall, which dislodged a cog, and its wheels stopped moving. ICU attacked with its axe, dragging it into the CPZ, where it was attacked by Dead Metal, before being counted out by Refbot, being placed on the floor flipper, landing on Sgt. Bash, and finally being pitted.

"The revolution has been quashed. Long live the king, the king is ICU!"
— Craig Charles

"Has had lots of fights - it's lost most of them!"
— Jonathan Pearce on Revolution 3

"We've seen our machine run, and we know what it can do, so we're just going to go out there, and we'll show you what it can do!"
— Confidence from Roger Webb prior to Round 2

In the second round, it fought another newcomer, Ceros. Revolution 3 avoided Ceros and reversed into the pit release button at the start, but broke down after the first flip from Ceros. Ceros continued to flip the immobile Revolution 3 around, and it was attacked by Shunt and Sgt. Bash, who placed it onto the Drop Zone. A television was dropped, but it broke apart when it hit Revolution 3.

"They wanted to be on telly, and the telly ended up on them!"
— Craig Charles after the fight

After the battle, it was revealed the robot had stopped working because the link had fallen out. Roger Webb admitted the link had not been put in properly.

Revolution 2 in the arena in Series 6 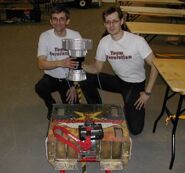 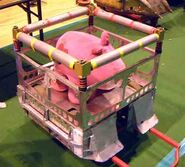 Revolution 3 at Roaming Robots in Liverpool 2004, with with its wedge

After Robot Wars, Revolution 3 was entered into the 2004 UK Championships hosted by Roaming Robots. The robot was relatively unchanged from its Series 7 appearance and it was granted the number three seed, but was unable to actually participate in any of the qualifying rounds, and subsequently didn't qualify for the Finals. However, it picked up a trophy at Robot Crusade 2004. When unable to use their spinning weapon, Revolution 3 was equipped with a spike. The original Revolution also competed around the same time[2].