"Robot warring in the palm of your hand."
— From the back of the Advanced Destruction box

Robot Wars: Advanced Destruction is the third out of a total of five Robot Wars video games. It was created by Crawfish Interactive and published by BBC Multimedia for the Game Boy Advance.

Published in the US by Vivendi Universal Games, the US version is slightly different from the UK version in that Jonathan Pearce's voice has been replaced with that of another uncredited actor. Jonathan Pearce is still mentioned though in the game's credits. The UK version was also distributed in Australia by Roadshow Interactive.

Like the previous game, Robot Wars: Arenas of Destruction, Advanced Destruction featured more than one arena to play in. This game featured four different arenas, each with their own pitfalls and traps.

A single battle between two robots randomly selected by the computer. Battles are always fought under Championship settings.

Here, a player may create their own robot. A robot can be created any way the player desires, but it must be under the specified weight limit.

There are three main games in Advanced Destruction.

Up to four players can play battles and other games in this mode.

Here, the player can toggle the music, sound, controls and difficulty and also view the credits.

Note: Diotoir, Dominator 2 and Tornado are available to the player from the start of the game, all other competitors have to be unlocked by defeating them in the Championship Mode. 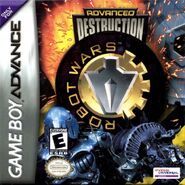 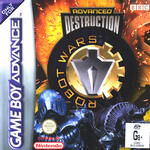 The game cartridge, booklet and box
Add a photo to this gallery

Retrieved from "https://robotwars.fandom.com/wiki/Robot_Wars:_Advanced_Destruction?oldid=291738"
Community content is available under CC-BY-SA unless otherwise noted.