"New Arenas, New Weapons, New Games"
— From the back of the Extreme Destruction box

Robot Wars: Extreme Destruction was the last of the Robot Wars video games to be released. The version created for PC and Xbox was developed by Climax Group and released by BBC Multimedia in 2002. A separate version of the game was released for Game Boy Advance, but the gameplay, arenas and available robots differed greatly between the two versions. The PC version was also released in Australia in 2003 by Dataworks Australia.

The game features eight different arenas, each with their own separate features and hazards.

When the player starts the game, it is only necessary to buy or build a robot in Competition mode as all the currently unlocked robots are freely available without the need to purchase in Arcade mode. When the player starts Competition mode, the player is given 3500 credits to buy or build a robot, although only one of the available robots is cheap enough to buy at the start (Barrabis). When building a robot, it must have a chassis, power source, drive, locomotion and armour. It is also possible to fit all of these components together by purchasing a powertrain instead of a chassis at the start (but without armour). The player can then add non-compulsory weapons and extras to your robot before competing. Most of the components are locked at the start of the game and must be unlocked by winning the various tournaments.

The game features two battle modes; Arcade and Competition. Arcade mode allows the player to jump right in and compete in various types of battles without the need to buy or build a robot. However, only the robots and arenas unlocked in Competition mode are available to use. Arcade mode features eight different battle types, which are:

In Competition mode, the player must either build or buy a robot and compete in various different tournaments. The player wins more money and unlocks new components, robots and arenas by winning these tournaments. The tournaments predominantly feature regular battles (either one-on-one, melees or annihilators), but occasionally feature a Mad Bomber or Capture The Flag round. Interestingly, all melee battles within the game appear as a 'First Round Melee', regardless of where in the tournament the battle is fought. In total there are eight stages, each featuring a different number of tournaments. When all eight stages are completed, the player takes part in the Final Battle, which is an endurance battle against various real-life competitor robots and one house robot entering the arena last.

The game features many playable robots, most of which must be unlocked to use. The majority of the robots are from Extreme Series 1, but some of them do have features of their Series 4 appearances, and Panzer Mk 4 was only seen in Extreme Warriors Season 2. The real-life competitor robots from the TV series that are obtainable in the game are:

This is the only video game to feature Refbot and also features the five original house robots; Sir Killalot, Shunt, Dead Metal, Sergeant Bash and Matilda. However, the game does not feature Mr. Psycho, Growler or Cassius Chrome as it is set during the first series of Extreme.

If you entered the cheat correctly, a cow moo sound will play.

One patch (1.115b) was released on November 22, 2002 for the PC version of the game that addressed a few issues that were in the initial release, mostly concerning support for various graphics cards:

Patched versions of the game have the text "Version 1.115b" in the bottom left-hand corner of the main menu screen.

A demo version of Extreme Destruction was also released with the December 2002 issue of the UK PC Gamer magazine. It featured only a single battle: a six-way annihilator in the TV studio arena featuring Panic Attack (controlled by the player), 101, Behemoth, Diotoir, Plunderbird 5 and Wheely Big Cheese. 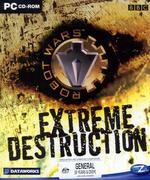 The PC game with the disc and manual

Poster in Issue Two of Robot Wars: The Official Magazine, promoting the game

Advertisement for the game
Add a photo to this gallery

And with special thanks to all the Robot Teams, without whom the programme would not be possible:

*Ciarán Byrne is incorrectly spelled as Cairon Byrne in the game

**Christian Bridge's name is shown in brackets for unknown reasons. This is presumably due to him joining the team via the competition in the Robot Wars Magazine

Retrieved from "https://robotwars.fandom.com/wiki/Robot_Wars:_Extreme_Destruction_(PC/Xbox)?oldid=359118"
Community content is available under CC-BY-SA unless otherwise noted.