"Are you ready for WAR? Challenge the might of the robots in the ultimate battle arena. There's only one winner as you fight to destroy the enemy and avoid destruction from the evil house robots. Put the scrap back into metal as you train, build your own robot and go into battle against the computer or human roboteer!"
— From the back of the Metal Mayhem box

Robot Wars: Metal Mayhem was the very first of the Robot Wars video games to be created. For the Game Boy Color, it was based around the third series of Robot Wars and featured competitors from that series.

The game featured a selection of modes which allowed players to compete in trials and 1v1 battles similar to the real show, using one of a handful of real-life robots, or a custom creation.

Robot Workshop allowed players to build their own robots. Customisation was very limited, with only four categories to allow players to personalise their own creation. Players can name their robot once complete, and this name will show up in battle cards, and on any trophies the player may win using it.

First, players must choose a shell, which dictates the shape of the robot. The four options are a classic wedge, a narrow wedge (similar to Grunt), a domed body and "the egg", which is similar to the domed body but is more compact and features four exposed wheels.

Players next have a choice of five motors, which vary in speed and power. The "small motor" offers speed but not a lot of torque, whereas the car starter motor offers speed and power, but drains relatively quickly. The lawnmower motor is simply described as "strong and steady", the wiper motor "slow and strong" and the winding motor as "very slow and very strong". It is unknown how much impact the choice of motors has in battle.

Unique to Metal Mayhem, players can select the gear ratio of their chosen motor. Though it is not certain whether this has an effect in game, players can choose from high, medium and low gear ratios.

Disappointingly, the range of weapons included in the Workshop is very limited. Players can choose one of a hardened pneumatic spike, a spiked hammer, a vertically-mounted circular saw, or a rear-hinged flipper, the latter of which is largely pointless, as robots can only be flipped over in the game via arena spikes.

The next mode was the Grudge Match mode, which allowed the player to select a robot to control and an opponent to fight in a standard one-on-one battle, with best of three results. This, in turn, linked to the War Zone mode, which was the same as the Grudge Matches, except the player's opponents were preselected, and eight of them had to be fought and beaten in a row to win. One hit knock outs included being flipped by an arena spike or falling into the pit of oblivion. Otherwise, robots had to wear down their opponent's hit point gauge through attacks, arena hazards or House Robots. A robot bursts into flames once its health reaches zero.

Finally, there was a Trials mode, which consisted of a variety of challenges that the player could do. These consisted of the Gauntlet, Sumo, Skittles, and the Slalom. Players are also able to view their best results in each trial in the HiScores section.

Loosely based from the Gauntlet trial, the player would have to manoeuvre their robot through a lane of their choice and make it from one side of the arena to the other. The player would start at the bottom and have a choice of three lanes, and the end zone is measured 20 metres from the start.

The left side lane begins with a pair of spikes which can flip unsuspecting robots over and end their run prematurely. From then, the player must drive through saws in an enclosed area, similar to the ram-rigs in the show. After dodging more spikes, the player must get through a zone guarded by Matilda, before avoiding two pits, an array of floor spikes and more saws. The player must then find a way past Sir Killalot, traverse a pair of flame pits and finally, get past Dead Metal to finish. This is the only lane to feature more than one house robot.

The middle lane begins with the player having to evade a handful of floor spikes and three pits, before entering Sgt. Bash's zone. After this is a handful of barriers to weave through, with spikes again littered around the floor. The player must lastly drive through a minefield of floor spikes before reaching the end zone.

The right side lane is the only option where the player begins by taking on a house robot - in this case, Shunt. Beyond that, the player must manoeuvre past a labrynth of pits, spikes and grilles before coming head-to-head with Sir Killalot. Three more pits must be avoided before the player can reach the end zone safely.

Interestingly, Sir Killalot is also present in the left lane, though it is presumed a player would not opt to complete both lanes during their run, and as house robots in this mode do not escape the zones they are guarding, it is not possible to see both Sir Killalots at the same time.

Based on the Sumo trial from the first two series of Robot Wars, the Sumo event would pit two competitor robots against one another. Unlike in future Robot Wars video games, players could not face a house robot in this mode. The sumo ring was a circular plinth with starting rectangles for each robot, and a cross in the middle to mark the centre. Warning stripes were present around the circumference of the ring, and losing robots would fall into a void. The outside of the ring is surrounded by a curved wall which may resemble a viewing stand, though this is unclear from the limitations of the game's graphics.

Again loosely inspired by the show's trial, the Skittles trial in game challenges players to knock over individual skittles which are littered around the arena in the quickest time possible. Each skittle is orange to stand out against the arena floor, and must be driven into rather than being over by a robot's weaponry. House robots will patrol patches of the arena rather than their typical CPZ, in order to interfere along the way. The floor is also sectioned off by barriers to make traversing the arena more difficult. There are 25 skittles in total, though the trial will end after ninety seconds regardless of how many have been knocked over.

The only trial not based on an existing event in the show, the player must navigate a path across the arena to the end zone, whilst avoiding periodic bursts of flame which erupted from the floor and would cause a robot's health to deteriorate rapidly. Each flame jet acted as a checkpoint, of which there are 16 across the Slalom path, which was marked out by warning stripes.

The player must hit each checkpoint in order, or future checkpoints would not register. If not completed within two minutes, the trial would end.

Differences between game and show[]

"If I was locked in a room with only a Game Boy and this game I think I’d rather attempt to eat the Game Boy instead of putting myself through this again."
— Dracophile of Twilight Foundry

The game received very poor reviews. A review for The Twilight Foundry said that "any way you cut it you lose", citing in particular the repetitive music track, terrible graphics, unexciting gameplay, limited customisation, lack of bonus content and poor controls. Robshi from GameFAQs criticised the game for being nothing like robot combat and gave a final instruction to stay far away from the game. The game's selection of competitors was also the centre of criticism, with omissions such as World Champions Razer, as well as Third Wars Grand Finalists Hypno-Disc and Steg-O-Saw-Us. 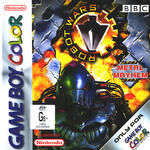 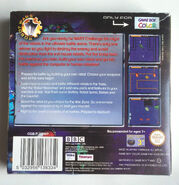 The back of the box

An advert from the Robot Wars Magazine for Metal Mayhem 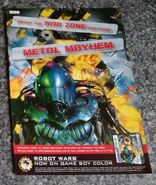 A promotional flyer from the Robot Wars Club

*An in-game typo. The correct spelling of the company's name is Mentorn Barraclough Carey.