Series 9 of Robot Wars aired in early 2017, returning to the Glasgow arena used in the previous series. The series was again hosted by Dara Ó Briain and Angela Scanlon, with commentary from Jonathan Pearce, also featuring the same Judges and House Robots as Series 8.

Episode 1 aired on Sunday 5th March, 2017 at 7pm[1]. It continued for the four following Sundays, missed one week due to a clash with coverage of the final day of the 2017 Augusta Masters, one of Golf's Major Tournaments, on BBC Two, before airing the Grand Final on April 16th.

The series was first confirmed through online articles released in the early hours of October 11, 2016[2].

Applications for competing teams closed on October 21st. The series was filmed in one block in December 2016, from the 2nd to the 7th[3]. The filming block included 2016's Christmas Special, Robot Wars: Battle of the Stars, and the main series, airing at a later date.

As they were not announced in any press packs, as was the case with Dara Ó Briain and Angela Scanlon, Judges Professor Noel Sharkey and Dr Lucy Rogers confirmed their involvement via Twitter[4][5], Noel Sharkey also confirming Sethu Vijayakumar's involvement[6]. The return of Jonathan Pearce was confirmed by the UK Robot Wars Facebook account[7].

The first teaser trailer for the series aired on February 10th, 2017[8], officially referring to the series as Series 9 for the first time, and confirming that the series would air soon. Two alternate versions of the trailer exist with different background music- the first version uses "I Knew You Were Trouble" by Taylor Swift, whilst the second uses "The River (Dubstep Remix)" by Blues Saraceno.[9]

The airdate of the series was first revealed on February 16th by the BBC[10], also confirming the eight competitors in Episode 1. On February 18th, an extended trailer aired after Match of the Day, where Sir Killalot, Shunt & Matilda destroyed a Vauxhall Corsa.

On February 22nd, competing teams were given permission to confirm their participation in the series, and release official imagery. Draven was the first robot to be revealed this way[11], followed by Eruption[12].

From April 5th-8th, How to Build a Robot was released online, featuring robots from Series 9 while promoting applications for future series. The main series finished airing on April 16th.

The format was the same as that of Series 8, the first time a series had followed the exact same format as a previous series, containing six episodes; five qualifying heats and a Grand Final, with a sixth finalist being chosen as a wildcard by the Judges. There were eight robots per heat, of the forty in total.

Four robots fought in each first-round qualifier, of which there are two per heat, allowing two robots to qualify through them. In the second round, a round robin format was used, where the four robots which qualified out of the first round in each episode would all face each other in a head-to-head battle, even if they had already met in the first round. A certain number of points was given to a robot, based on whether it lost (0 points), won via KO (3 points), or won via Judges' decision (2 points). The two robots with the most points fought again in the Heat Final.

NOTE: The available choices for the Wildcard were the Heat Finalists, Sabretooth, Cherub, Thor, Pulsar and Apollo.

Although not officially part of any series, Robot Wars: Battle of the Stars, a two-part celebrity special, was filmed alongside Series 9, and aired on December 28-29th.

The celebrities in Battle of the Stars, Episode 1

The celebrities in Battle of the Stars, Episode 2

Angela Scanlon and Dara Ó Briain in a promotional shot

Angela Scanlon in a promotional shot with Sir Killalot

Team Carbide and the presenters with the trophy 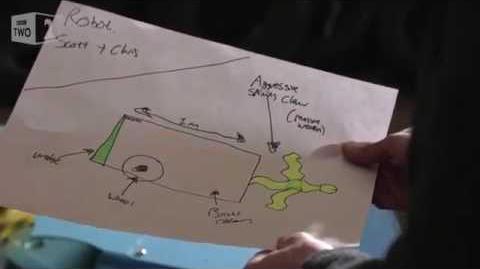 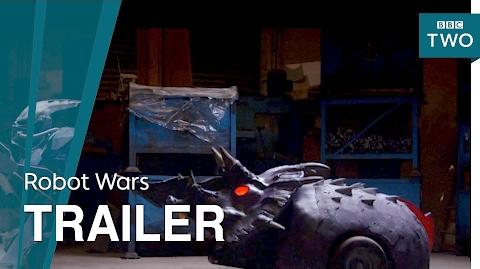 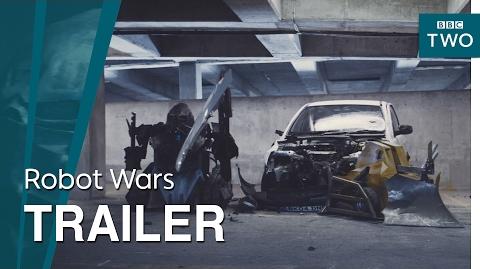 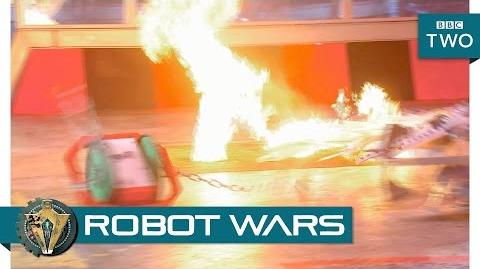 Retrieved from "https://robotwars.fandom.com/wiki/Robot_Wars:_Series_9?oldid=290520"
Community content is available under CC-BY-SA unless otherwise noted.