"It's my absolute pleasure to welcome you to the very first issue of the brand new, 100% official, action-packed Robot Wars Magazine! Some of you may remember the last magazine dedicated to all things metal mayhem. But don't confuse us with our predecessor - the cool publication you now hold in your in your hands is a complete reinvention of the grinding wheel. Robot Wars Magazine is an-all new, totally different, carnaged-filled {sic} which will really knock the wind out of other magazine on the newsstand."
— Opening message from Darryl, Mistress of Mayhem

Issue 1 of Robot Wars: The Official Magazine, cover dated December 2002, was released on the November 2002. It was the first issue of the second run of the magazine.

A Mr Psycho cutaway included with the issue. 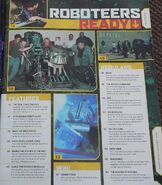 Retrieved from "https://robotwars.fandom.com/wiki/Robot_Wars:_The_Official_Magazine/Issue_1?oldid=237964"
Community content is available under CC-BY-SA unless otherwise noted.