The War Zone is the only arena available to fight in when playing the video game Robot Wars: Metal Mayhem. The Arena is a representation of the Robot Wars Arena, the battle zone used for containing all of the battles during every series of Robot Wars. As the game is based upon Robot Wars: The Third Wars, it is this version of the arena the game attempts to reproduce.

The game's representation of the Robot Wars arena is somewhat poor, although given the technology, certain features do reflect real-life counterparts. The famous Pit of Oblivion is featured near the top-left hand corner of the arena, and is much larger than in real life. Four Corner Patrol Zones line the corners of the arena, each guarded by a house robot, who will turn to face competitors, but cannot leave their CPZ and so will only attack if a robot is in the zone. Due to there only being four CPZs, Shunt does not appear.

In the middle of the arena, all of the Flame Jets in the floors and the walls have been replaced, instead combined into one large Flame Grille roughly the same size as the Pit. Chainsaws, instead of the real life Angle Grinders, line one edge of the arena, which slowly cause damage to competitor robots upon prolonged contact with them.

On the left hand side of the arena, two large floor Spikes, thicker than real life, will fire at regular intervals. Seven of the competitor robots will be flipped on their sides and instantly eliminated, for some reason including Fire Storm, who was known for self-righting. This happens when they are caught on a Spike when it fires- there is no flipping on the game besides this, and there is no opportunity to self-right. The floor of the arena is darker, and decorated by several marks and lines, as well as a large grille (Which would in real life conceal the Pits used in the Trials), but these serve only cosmetic purposes.

Differences between the Game and Real Life

For the game's trial modes, the layout of the arena has been modified to suit the purposes of each event: 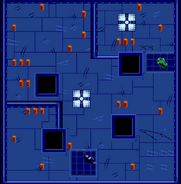 Sumo
Add a photo to this gallery
Retrieved from "https://robotwars.fandom.com/wiki/Robot_Wars_Arena/Metal_Mayhem?oldid=138380"
Community content is available under CC-BY-SA unless otherwise noted.