"Nowhere in our arena is safe for our teams. The spikes, the fire, the flipper and the pit can cut a team's journey short at any time. And the arena just got deadlier."
— Jonathan Pearce, Robot Wars: The Official Handbook[1]

The Series 8-10 Robot Wars Arena was the sixth incarnation of the Robot Wars Arena, used for the three rebooted series of Robot Wars. The arena was designed by Robo Challenge and custom-built at a previously unused warehouse in Westway Park, Renfrew, in Glasgow, making this arena the first to to be located outside of England. The wooden painted flooring of old was replaced with 6mm steel panels[2], with most of the arena wall sections now featuring taller 'bulletproof glass' (polycarbonate) screens to reduce the likelihood of competitors getting thrown out of the arena.

The arena was encased in a 20x20m square polycarbonate enclosure, with the main battle zone comprising of a 15x15m space with 6mm steel floor panels and steel walls taller than those in previous series. The outer enclosure included a 7m-high roof, which, according to Robot Wars: The Official Handbook, was suspended from large cranes enabling ease of maintenance in between battles.[3] The main wall sections and entry gates were slightly taller than in previous arena incarnations, with the bulletproof panels forming part of the more angled sections located around the corner (CPZ) boundaries.

Three hydraulically-operated entry gates were placed between the left, right and rear wall sections, the former two enabling competitor robots to be brought and placed inside the arena prior to activation. These were also used for robot introductions in Series 8 and Series 9, along with accompanying 'hero shots' used in publications and on the official Robot Wars website. The rear gate was used exclusively by the House Robots, with sequences being filmed showing them using this gate to drive into the arena for battles. All three gates were the only places where the bulletproof screens were absent, thus being the only places where robots could usually throw another out of the arena. An exception to this occured in Series 10, where Apollo was able to launch one of The Swarm's clusterbot segments over one of the bulletproof screens during its Group Battle in the first heat.

In Series 8 only, a similar section along the fourth wall holding the pit release button (later renamed the Arena Tyre) also existed, which was covered up by the Dial of Doom in Series 9-10 (see Hazards). Around the arena was The Trench (collectively The Trenches), an empty space between the inner and outer walls which acted as a designated flip-out zone. Beyond this were rows of seating for the live audience, with a capacity of up to 400 people.[4][5]

Two control booths, now alternatively referred to as Control Rooms or Viewing Towers[6], were located behind the front wall, each shielded with bulletproof panels and raised 2.5m above the arena floor.[5] As before, teams controlled their robots from inside each control room, however unlike in previous series, both hosts (Angela Scanlon and Dara Ó Briain) were also able to perform interviews there in Series 8-9 instead of the now-abandoned central booth/balcony. Occasionally, Scanlon and Ó Briain could also be seen watching and reacting to battles whenever the left control room was made vacant, a practice made more visually prominent throughout Series 10. The latter series also saw post-battle interviews adopt more varied backdrops, including the main arena and areas within The Pits, somewhat deemphasising this aspect of the control rooms' purpose.

In Series 9, the arena floor was given a minor repaint, with more black markings painted on, as well as revised lighting which was further altered for Series 10.

The following hazards appeared within the Series 8-10 arena, many of which were carried over from the original series:

Changes from the Previous Series[]

During filming of Series 8, which took place in March 2016, there were a few cases where competitors with pneumatic weapon systems were adversely affected by cold weather. The low temperatures of the studio limited the ability of the stored liquid CO2 to vaporise - a condition which is required for some valves in order not to freeze the components with liquid CO2 . This restricted vaporisation of the CO2, thus limiting the flow rate and ultimately the effectiveness of the weapons systems.

Q: "How many times can Apollo flip before it runs out of gas?"
A: "Apollo usual has around 10 to 15 full power flips, and then they will gradually get less powerful. However the studio and arena for the filming was very cold, this means the gas moves a lot slower around the system. Meaning the flipper runs with less power. So this series of Robot Wars doesn't show the full potential of Apollo’s flipper. If we were to run in a warmer environment the flipper power would improve almost double."
— Q&A with Team MAD's Dave Young.[10]

Robots affected by this include Bonk, and Dantomkia, both proving unable to self-right due to the cold temperatures.

Series 9 was filmed in December 2016, with further concerns being raised beforehand regarding how cold weather would affect certain competitors. To combat this, competitors were allowed to place their CO2 bottles in a heated room prior to battles[5]. Series 10 was filmed in May 2017, somewhat remedying the issue.

The new arena under construction

The final stages of construction

The Dial Of Doom, activated in 'Pit' mode 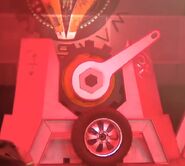 The Dial of Doom, activated in 'Rogue House Robot' mode