During the course of the show's original run, a Robot Wars Magazine was published to follow the series and give behind-the-scenes information about the show and the future series. There were two separate magazines, each published on a monthly basis. The first edition covered Series 4 and also had previews of Series 5 and Extreme Series 1. It ran for twenty issues before it was cancelled. The second edition covered Series 6 and was due to cover Extreme Series 2, but it was cancelled after only seven issues, despite its more technical focus and having notably more information than its predecessor.

The first version of the Robot Wars Magazine was primarily dedicated to covering the third and fourth series of Robot Wars. Early issues would provide detailed profiles of the House Robots and some of the most notable competitor robots, as well as brief reports for various battles across Series 3 and 4. Later issues would feature coverage of Series 4 - including brief reports of every Heat - as well as previews of Series 5, offering a look at some of the newer competitor robots and a wallchart featuring competitor line-ups for the latter series. Each magazine also had full-sized pull-out posters and free souvenir gifts including CD-ROMs and keyrings, as well as puzzles, competitions and sections on how to draw certain competitor robots.

Members of the official Robot Wars Club would receive a free subscription to the Robot Wars Magazine as part of their membership. In the magazine, there was always a page featuring various updates, including websites for competing teams and news about recently-released Robot Wars merchandise, including pullbacks and minibots.

The first magazine contained several comic strips, as was common in many magazines. The first few comics were elaborate 'backstories' for the House Robots, perpetuated to show their "origins" before their appearance in the TV show. The comics often had a very sci-fi feel to them, portraying the House Robots as having very exaggerated beginnings, such as Shunt originally being a power plant maintenance drone which mutated following a nuclear meltdown, and Sgt. Bash being built as an experimental military weapon. The depiction of the House Robots in this light is somewhat similar to the backstories they received in the Robot Wars Technical Manual.

Later issues featured "Fantasy Fights", usually between two or more Series 4 competitors. The battles usually had a given theme, for example, Issue 17 featured Firestorm 2, Bolt from the Blue and Tornado fighting each other in a "weather"-themed battle. Like the House Robot origin comics, they tended to be rather exaggerated in terms of damage, with explosions and panels flying off with little more than a ram and the losing machines often ending up being completely destroyed. The fights also frequently featured several visual errors and inconsistencies regarding the robot's designs or weapons - in one notorious example, Mortis was shown fighting without its armour when it battled Stinger and Hypno-Disc in Issue 20.

"Thank goodness it's fantasy, I doubt a fight against Firestorm would be too easy for us. Especially with a pneumatic spike that appears to be jammed in the out position! But that's not the worst of it - Firestorm appear to be sporting their front edge cover and carrying cradle in the arena!"
— Team Tornado on the inconsistencies present in the aforementioned weather-themed Fantasy Fight[1]

Earlier issues tended to have one Fantasy Fight, whilst there were two Fantasy Fights in later issues, usually one being a head-to-head whilst the other was a three-way-melee. Some battles contained a House Robot, which would get rather involved in the battle and invariably end up destroying one or occasionally both of the competitors.

Note: Winners are shown in bold. Fights in italics were draws

From Issue 14 onwards, a short comic strip, entitled "At Home with the House Robots", was added to the Letters section. These strips were usually six panels long, and depicted the anthropomorphised House Robots living together and performing everyday household tasks, with haphazard and often destructive results.

In the 8th edition, a fictional House Robot called The Red Baron was created. The robot, named after the nickname of World War I flying ace Manfred von Richthofen, was designed to incorporate all of the "best bits" of the original five House Robots into a single machine. Some of its features included Dead Metal's saw, Shunt's bulldozer, Matilda's chainsaw, Sergeant Bash's flamethrower and Sir Killalot's claw and lance. It ran on Sir Killalot's tracks, whilst its body was the same design as Sergeant Bash's, except it was red instead of green.

The Red Baron also made an appearance in the last edition of the magazine, where it fought Chaos 2, Pussycat and Razer in one of the Fantasy Fights. However, even after at one point pinning Chaos 2's flipper down due to its massive weight, it lost after its armour was damaged by Chaos 2 and Razer, before having its hydraulic cables severed by Pussycat's blade, whereupon it caught fire and literally exploded.

Alongside The Red Baron, a fictional competitor robot named Chrazedortic was also introduced. It was also a "hybrid" robot designed to be the "ultimate contestant", consisting of parts from Chaos 2, Razer, Panic Attack, 101, Mortis and Weld-Dor 2. A second fictional competitor, named Disastertron and incorporating parts of Banshee, Destruct-A-Bubble, Scorpion, The Creature and Wheelosaurus, was also featured as "probably the worst robot ever". Unlike The Red Baron, Chrazedortic and Disastertron did not make any further appearance in the magazine, although they may have inspired the Bot Bits puzzles in the Puzzle Zone section, which mixed various parts of competitor robots together. These puzzles included:

Other fictitious robots featured in the magazine included the Superbots, which were hypothetical upgrades of the House Robots with features suggested by readers of the magazine and fellow Robot Wars personnel. Most of these upgrades appeared to be impractical or unrealistic (e.g., the missile launchers on the Super-Sarged concept for Sergeant Bash), with some being derived from initial concept sketches for the House Robots:

During the run, the magazine generated several notable moments that were carried over to the show and its various merchandise, and even a minor incident that was the basis for a Vengeance battle in the first series of Extreme.

The second edition (now called Robot Wars: The Official Magazine) was published by Titan, and the first issue was released after the first broadcast of Heat A of Series 6. In direct contrast to the previous magazine, it was designed to be much more technical and informative, with more emphasis on battle reports, behind-the-scenes interviews and information on the robots, teams and Robot Wars personnel. As a result, the comics from the previous edition were dropped completely.

This magazine featured news and updates from the Robot Wars community, detailed battle write-ups from Series 6 - complete with robot statistics- as well as various interviews with well-known Robot Wars teams, presenters and judges. There were also various articles from behind the scenes, with the first magazine covering the conception of then-new House Robots Mr. Psycho and Growler. Team 101 captain Mike Franklin also had his own section where he gave advice about robot building. He was also due to provide instructions for readers to build their very own robot, but the magazine was cancelled before this could happen.

Members of the Robot Wars Club, as with the last magazine, would get a free subscription to the magazine, an advertisement which was shown during the ending disclaimer of every episode of Series 6/Extreme 2.

Although notably more informative than its predecessor, the second edition of the Robot Wars Magazine did not last as long, with only seven issues published. During its run, it had a notable clash with the BBC's scheduling for the Sixth Wars. The first issue was published not long after Heat A, however, it featured write-ups of Heat A and B, thus providing spoilers for the latter heat. Notably, one reader wrote in to the publishers and informed them, whereby a written apology was made.

Unfortunately, this was not the end of the conflict. The seventh issue, the last issue to be released, covered the first three shows of the second series of Extreme (the All-Stars and the Annihilator). However, the BBC had postponed its broadcast of Robot Wars for a few weeks to provide coverage of several other shows, including golf. By the time the magazine was actually issued, only the first heat of the All-Stars had actually been aired on television.

The eighth issue had been due to cover the Minor Meltdown, Tag Team Terror and the first two heats of the New Blood Championship. However, by the time the magazine would have been released, the BBC had aired none of these episodes. Ultimately, the eighth issue was never published, and the magazine was promptly cancelled.

Issues 1 to 4 of the Titan magazine 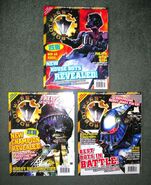 Issues 5 to 7 of the Titan magazine

A write-up for a Heat battle. Note the much greater detail than the first magazine

Part of an in-depth interview with Team Tornado, from Issue 6, pp.38-39 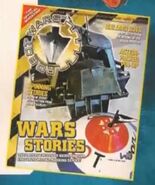 The cover of the planned Issue 8, which was ultimately never released