"You know, people often ask me: "Matilda, what's it like working with all those nasty, noisy boy robots?" And I always reply the same way: "flipping BRILLIANT!". Just because I'm a girl, it doesn't mean I'm not as tough as the others."
— Opening message from Matilda, Page 3

Grudge Match: Dominator 2 vs Wel-Dor {sic} vs Berserk 2 - A fight between three robots with axes. Berserk 2 started by flipping over Weld-Dor 2, but Weld-Dor 2 quickly self-righted. Berserk 2 was axed by Dominator 2 and Weld-Dor 2. Berserk 2 tried to axe Dominator 2, but caused no damage, then axed Weld-Dor 2, which axed Berserk 2 back, but the two robots got their axes stuck in each other. Dominator 2 took full advantage, ramming them both into the pit.

A number of stickers were included with the magazine. 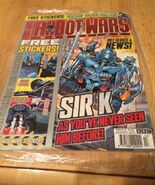 The magazine in its bag

Retrieved from "https://robotwars.fandom.com/wiki/Robot_Wars_Magazine/Issue_9?oldid=276442"
Community content is available under CC-BY-SA unless otherwise noted.