Robot Wars Wiki
Register
Don't have an account?
Sign In
Advertisement
in: UK Series competitors, Featherweights, Robots to complete the Gauntlet,
and 10 more

Spikes
Statistics correct as of its most recent appearance on the show, or if not applicable, qualification attempt.

"Built by Essex schoolboys, those SAT'arn pointed horns are made of shelving brackets bolted together, but a turning circle of a sluggish 3m could leave these hopes blunted."
— Jonathan Pearce introduces SAT'arn

SAT'arn was a box-wedge shaped robot, armed with a pair of front 'horns' made from shelving brackets bolted together. SAT'arn was based on a Tamiya monster truck with a thick (10mm) fibreglass shell. Visually, it was based on a bull, and featured one open eye, a snout, a tail, and the top of the was covered in flames.

"We've got a number of different features; we've got a wagging tail at the back, sound effects, we've got a smoke machine for the nose, and a laser for the eye."
— Tom Barber

The snout and right eye were represented with 3D models in the robot's introduction, though these would be removed in favour of wedge functionality in combat, with a painted eye and snout being found underneath these props. SAT'arn did not use its prong weapons in its heat battle, likely a result of damage earlier in the competition.

SAT'arn attended the Series 1 auditions alongside all other fellow Series 1 competitors, four weeks before filming. SAT'arn was also used for a "race" between competitors in a labyrith maze with the objective of getting to Stephen Carsey first, it faced Grunt in one of these races.

"What Tom and Sam Barber didn't tell you is that SAT'arn also moos as it goes along. Mad cow disease? These boys are bonkers already!"
— Jonathan Pearce as SAT'arn runs the gauntlet

In the Gauntlet, SAT'arn started by reversing out of the turntable, slowly reversing into a fence. It quickly turned around, and aimed for the far route, but Sergeant Bash blocked its way. Whilst trying to get past the House Robot, SAT'arn drove into the side railings, but Sergeant Bash held back and SAT'arn quickly turned away from the railings and darted down the course. However, in its haste, it drove straight into a pyramid, getting stuck between the pyramid and the second ramp. It managed to reverse, but as it tried getting past the pyramid, it drove into it again.

"I'm not too sure about the steering with that mad one eye..."
— Jonathan Pearce as SAT'arn bumps into the pyramid again

It turned past the pyramid and charged towards the end, neatly dodging Matilda to complete the course.

"...but it certainly is bullish! Oh what a great run, straight through! Look at the manoeuvrability and 10 miles an hour speed past the House Robots!"
— Jonathan Pearce as SAT'arn completes the course

The leaderboard showed SAT'arn to have completed the Gauntlet in the quickest time, even though The Demolisher only appeared to take nine seconds to complete it.

In the Trial, which was Stock Car, SAT'arn started in pole position, having finished first on the leaderboard. It started badly, crashing into the fence as it took the first corner, and Cunning Plan and The Demolisher crashed into the back of it. Cunning Plan and SAT'arn reversed together, leaving SAT'arn from the fence and able to continue. It made it past the second turn, but as it reached the centre, it clipped a wall, and The Demolisher overtook it. SAT'arn turned itself off the wall, and followed The Demolisher, having no problem with the next turn, but it slowed down approaching the turn after that. It drove towards the centre, but drove into a wall again. Krayzee Tokyo drove into it as it tried reversing off the wall, and SAT'arn appeared to be blocking its opponent for a short time, even reversing into Krayzee Tokyo. It then shot forward to cross the line. It seemed to be progressing well on its second lap, but was briefly blocked by the immobile body of The Demolisher, which had flipped itself over taking a corner too fast. SAT'arn struggled to squeeze between The Demolisher and the wall, but managed to push past the overturned opponent, however before it could complete its second lap, Bugs and the immobile Krayzee Tokyo were blocking the way. SAT'arn pushed Bugs, and the two crossed the line. SAT'arn was moving sluggishly and drove into the railings, but it did not matter as Cunning Plan completed its final lap to win the race. SAT'arn came joint second and qualified for the arena, where it met The Demolisher.

Phillipa Forrester: "How do you think SAT'arn will fare?"
Tom Barber: "Pretty well I think, it's a lot bigger, and got more power behind it."
— Tom Barber on how he felt about fighting The Demolisher

"SAT'arn, like a bull, rushes at the Demolisher - oh, you silly moo, you missed him!"
— Jonathan Pearce

"There was a connection that came off...we had problems with it yesterday."
— A crestfallen Tom Barber explains SAT'arn's breakdown to Phillipa Forrester

According to Oliver Steeples, SAT'arn's breakdown was caused by the speed controller failing.

"[The fibreglass] shell was its undoing as it weighed too much and caused SAT'arn to blow it in the semi final against Demoliser. {sic} ... the speedo blew and Matilda had no trouble almost cutting SAT'arn in half. "
— Oliver Steeples of University of Reading[2]

NOTE: SAT'arn's successful Gauntlet and Trial runs are not included 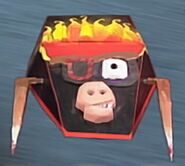 SAT'arn close-up in the pits