"Sergeant Bash is the robot that shoots flame; he uses a pull back motor and is very fast. Bash has jaws, which were designed specifically for the toy, but are now being used to modify the real robot. A button on the top of the body shelf activates the jaws. At the rear Bash can change his circular saw into a large sized drill. However, the most impressive part of Bash is his ability to shoot (plastic) flame. He fires this flame at three tyre targets to score points"
— Official description from the Robot Wars Online Shop[1]

The pullback toy of the House Robot Sergeant Bash was based on the Series 3 onwards version of its real life counterpart, and so the toy was known simply as Sgt. Bash.

It featured Sgt. Bash's signature flamethrower. This was able to rotate, and it fired a plastic "flame". This was done by inserting it into the barrel until it clicked. Pulling back the lever on top of the flamethrower would fire the "flame", which could be shot over a long distance. The pincer was also operational, with the aid of another lever above it but much like the Dead Metal/Pullback, the jaws won't stay open.

Unlike the toy's real life counterpart, the pullback had an angry face painted on the sides of the pincer, rather like the faces painted on the front of some fighter jets. The final asset in the pullback's arsenal was the rear saw. This was buckled (as it was on the real Bash from Series 3 onwards). However, this saw was removable and a drill could instead be fitted, a slight deviation from the real life counterpart.

Being one of the first phase of pullbacks, the Sgt. Bash pullback came with a part of the Pinball set. In this case three tyres and stands and points stickers to stick on them. 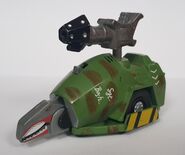 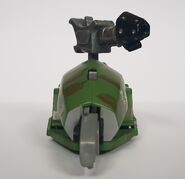 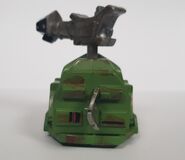 Retrieved from "https://robotwars.fandom.com/wiki/Sergeant_Bash/Pullback?oldid=326304"
Community content is available under CC-BY-SA unless otherwise noted.