Robot Wars Wiki
Register
Don't have an account?
Sign In
Advertisement
in: UK Series competitors, Robots from the West Midlands, Robots with Retracting Spears,
and 6 more

CO2 powered punch and axe
Statistics correct as of its most recent appearance on the show, or if not applicable, qualification attempt.

"A thirteen-strong team took seven months to build this, the tallest and longest in the heat with a three milimetre-thick aluminium shell, and a punching-lifting-ramming weapon powered by carbon dioxide."
— Jonathan Pearce introduces Sgt. Meikle

Sgt. Meikle was a competitor robot that exclusively fought in Series 3 of Robot Wars. It lost in the first round to The Darke Destroyer on a judges' decision.

Sgt. Meikle was a tall, black robot built by thirteen people over seven months, powered by two 12V wheelchair motors and a 12 volt dry cell battery, with the armour being 3mm thick aluminium plating. Its weapons were a serrated duralumin-headed axe and a CO2 - powered pneumatic spike, referred to the team as a 'punch'. While Sgt. Meikle displayed reasonable aggression during its only battle, its axe proved relatively ineffective, and the robot was slow and very light at just 64.8kg.

Sgt. Meikle was named after an engineering lecturer with the surname Meikle, who the team took inspiration from.

Sgt. Meikle participated in Heat F of the Third Wars, and was drawn up against fellow newcomer The Darke Destroyer in the first round.

"Doesn't look greatly punishing, does it, the blade? Looks like a feather, really, at the end of an ostrich leg."
— Jonathan Pearce comments upon Sgt. Meikle's axe 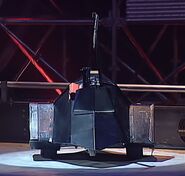 Sgt. Meikle in the arena

The team with Sgt. Meikle