"Shunt has a special pull back motor that changes direction when the robot hits an obstacle. Shunt’s major weapon is a fearsome axe that is activated by pressing down and then letting go. The axe punches down with devastating consequences. Shunt’s extra weapon is a circular saw that can be placed over the axe. The accessory supplied with Shunt is Multiball - front end of a car loaded with silver balls. When Shunt hits the bumper the balls are released. You’ll recognise this obstacle from the Robot Wars pinball event."
— Official description from the Robot Wars Online Shop[1]

The Shunt pullback was based upon the Series 3 onwards version of its real life counterpart, as part of the first wave of pullback toys.

Shunt was armed with its trademark axe which was operated by pushing down on the axe head when the axe is resting on the button hidden inside the chassis and releasing it. However its scoop weapon was fixed in position.

It also featured a "Bump and Change Direction" style drive, meaning if it hit an object it would change direction or reverse.

There was also a limited edition Golden Shunt released under specific conditions, which saw the Shunt pullback toy repainted entirely in gold, including the optional flywheel weapon accessory, which was also recoloured gold.

Being part of the first phase of pullbacks, Shunt came with a piece of the Pinball set. In this case the multi-ball release with balls, that was activated by hitting the front bumper, like its own real life counterpart. It also came with a rather chunky flywheel that could be placed over the axe head.

The Shunt Pullback in its box

The Gold Shunt in its box 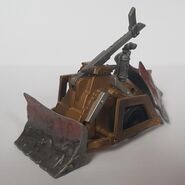 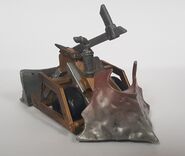 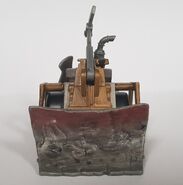 Side view, axe fired
Add a photo to this gallery

Retrieved from "https://robotwars.fandom.com/wiki/Shunt/Pullback?oldid=301105"
Community content is available under CC-BY-SA unless otherwise noted.