Robot Wars Wiki
Register
Don't have an account?
Sign In
Advertisement
in: UK Series competitors, Robots from Devon, Robots with multiple appearances without winning a battle,
and 5 more

Edit
This article is about the Series 6-7 competitor. For other uses, see Spin Doctor (disambiguation).

Rotating body with blades
Statistics correct as of its most recent appearance on the show, or if not applicable, qualification attempt.

"The team here says even it's frightened of this, oh come on, that's just spin!"
— Jonathan Pearce in Extreme 2

Spin Doctor was a small, purple robot with a full body spinner made from a lorry wheel, which could spin at 300rpm. In Series 6 and Extreme 2, the spinner was equipped with several small barbs which were used as teeth, although they did not deal a great amount of damage when they were used. Additionally, the robot's cut-off switch was exposed on a non-rotating panel on the top of the robot, leaving it vulnerable to being immobilised by blows from overhead weapons.

For Series 7, Spin Doctor (alternatively Spindoctor) had stronger armour, while the barbs on its spinner were replaced with much larger blades. Additionally, the spinner was increased in weight to 15kg, and upgraded to spin at 400rpm. Its top armour was also revised to better conceal the cut-off switch.

Spin Doctor had numerous weaknesses that prevented it from achieving any success. Its weapon was rarely effective, it had a vulnerable baseplate which was easily crumpled by Sgt. Bash in Series 6, and suffered from electrical problems that prevented it from surviving for a full battle. In addition, it was slow and unable to self-right, which resulted in its easy defeats against Bulldog Breed and Panic Attack.

The robot was entered by the Harlow family from Exeter, with Alastair Harlow being the captain and main driver, accompanied by Jenny Harlow and their father, Tim. For the Iron Maidens tournament, Jenny Harlow drove the robot, although she did not have prior experience with controlling it before the competition.

"A new team, they admit they don't even know their own strength!"
— Jonathan Pearce as Spin Doctor enters the arena

In its first round battle, and first fight in Robot Wars, Spin Doctor faced Kat 3, Bulldog Breed and Revenge of Trouble & Strife.

Bulldog Breed immediately flipped it into Sir Killalot, who re-righted it, and allowed Spin Doctor to retreat into an empty CPZ as Bulldog Breed flipped Revenge of Trouble & Strife over, rendering it immobile. Spin Doctor approached Refbot, before Bulldog Breed got underneath and flipped it onto its side into another CPZ, where it was stranded. Sgt. Bash moved into the CPZ and crumpled through Spin Doctor's wheel and baseplate with his pincers, causing the robot to start violently smoking. Spin Doctor was counted out by Refbot, before being placed on the Floor Flipper by Sir Killalot and flipped.

"In an age of spin, reality is hard to take."
— Jonathan Pearce as Spin Doctor is flipped by the Floor Flipper

In the second series of Extreme, Spin Doctor exclusively fought in the Iron Maidens tournament. In its first round, it fought former Grand Finalist Pussycat and Chompalot, with this being Jenny Harlow's first time driving the robot.

Spin Doctor was attacked early on by Chompalot, being grabbed by the latter's jaws and slammed into the wall. Chompalot then pushed Spin Doctor into a CPZ while Pussycat attacked its rear armour, with Spin Doctor playing very little part for the remainder of the battle. Spin Doctor then had one of its tyres shredded after an attack from Pussycat, which also dislodged one of its drive belts. Pinned against the angle grinders, and immobilised on one side, Spin Doctor was counted out by Refbot, and eliminated from the Iron Maidens tournament.

Philippa Forrester: "What would you say now, to all those male roboteers out there?"
Jenny Harlow: "Watch out, because we're gonna be back!"
— Post battle interview

Jayne Middlemiss: "Have you modified it?"
Tim Harlow: "Yeah, we've modified it a lot because last year I'm afraid we broke down fairly early and also our teeth were much smaller. This year they're much sharper, meaner, stronger, better in every way!"
Jayne Middlemiss: "The Seventh Wars have been a brutal wars, are you worried about stepping into that arena?"
Tim Harlow: "Terrified!"
— Pre-battle interview

In the first round of the Seventh Wars, an improved Spin Doctor machine was placed up against Mega Morg, Edge Hog and the number 8 seeds Panic Attack.

In the battle, before Spin Doctor could get up to speed, Panic Attack bumped it with its forks, causing it to flail on its side. As it regained its balance, Panic Attack shoved it around the arena, Spin Doctor tried to steer away but was far too sluggish, as Panic Attack then made a run-up and flipped it on its back against the pit release button, activating it, as Spin Doctor had just reached it. Spin Doctor was immobilised here, as its srimech didn't work and it was subsequently counted out by the Refbot, hammered by Mr. Psycho and flipped by the arena floor flipper. Cease was called, and Spin Doctor was eliminated from the competition, along with Edge Hog, who was pitted shortly after Spin Doctor's immobilisation.

"We wanted to see if it was improved and to be honest, no. They [the team] have to go back to the drawing board, I think."
— Jonathan Pearce as Spin Doctor is counted out 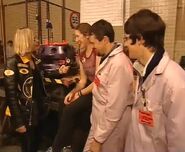 The team in Extreme 2

Spin Doctor in Series 7, in the pits 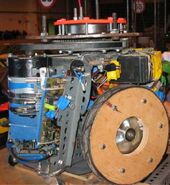 Spin Doctor without its shell

Spin Doctor without a shell in the pits during Series 7