Pneumatic lifting tail
Statistics correct as of its most recent appearance on the show, or if not applicable, qualification attempt.

"As deadly as a T-Rex with its lifting tail and punching spikes, as solid as a Brontosaurus, but will the "Tricera-top" speed be enough? I hope they don't become a "Diplo-joke-us!"
— Jonathan Pearce introduces Steg-O-Saw-Us in the Series 3 Semi-Finals

Steg-O-Saw-Us (occasionally spelt as Steg-A-Saw-Us) was the first robot from the Jurassic Park team, which competed in Series 3 of Robot Wars. Originally a reserve robot called in to replace T-Wrecks, it ultimately won its heat by defeating Napalm in the Heat Final, also defeating former champion Beast of Bodmin in the Semi-Finals to reach the Grand Final. After being immobilised and severely damaged by Hypno-Disc, Steg-O-Saw-Us ultimately finished joint-third in Series 3 along with Fire Storm.

Steg-O-Saw-Us was succeeded by Steg 2 and 3 Stegs 2 Heaven in Series 4 and 5 respectively, though neither robot reached the level of success of the original robot.

Steg-O-Saw-Us was a green box wedge-shaped robot designed to resemble a dinosaur, with red stegosaurus-style spikes along its body as well as two eyes and a mouth at its front end. Its main weapon was a pneumatic lifting tail at the rear, although the robot mainly relied on its high speed and pushing power to ram opponents into the arena wall and arena hazards, often causing significant or terminal damage to their internal components and drive systems in the process.

The team had originally planned to use tracks, but decided to swap them out for regular wheels before appearing on the show. However, Jonathan Pearce mistakenly addressed the wheels as tracks at one point during Steg-O-Saw-Us' run. Steg-O-Saw-Us cost a total of £1500 to build.

The robot's name was a pun on stegosaurus, a type of dinosaur, and 'saw'.

As a Robot Wars newcomer, Steg-O-Saw-Us made its Third Wars debut in Heat G, replacing the withdrawal T-Wrecks to face Series 2 returnee Orac's Revenge in its first-round battle.

"...but look at this power once more from Steg-O-Saw-Us! Slamming against the arena wall, this is impressive stuff here! And I thought Steg-O-Saw-Us was the underdog going into this battle..."
— Jonathan Pearce comments on Steg-O-Saw-Us' pushing power as it rams Orac's Revenge into the wall

Philippa Forrester: "You'll all very understated, all of you, aren't you?"
Dan King: "Well, yeah."
Philippa Forrester: "Yeah, it's quite reserved... quite shy, retiring, you come in, you do your job, then you're like, "Yeah, well, we hoped that we do that well.""
Peter Rowe: "Well, we came, we saw and we conquered!"
— Post-battle interview with the Jurassic Park team

In the second round, Steg-O-Saw-Us faced fellow Series 3 newcomer Henry, with the Jurassic Park team expressing confidence beforehand about their chances of winning.

At the start, it reversed towards the wall before charging towards and nudging Henry, which initially failed to move after 'activate' was called. Henry finally started moving after this attack, but stopped again as Steg-O-Saw-Us slowly approached and pushed it towards Dead Metal.

"Steg-O-Saw-Us looks a little bit pensive... were they being sucked into some sort of trap there, he wonders?"
— Jonathan Pearce as Steg-O-Saw-Us exercises caution against an unreliable Henry

Steg-O-Saw-Us waited as Henry again regained mobility and struggled to drive clear of the Flame Pit, before ramming it twice, driving itself into the wall on the second charge as Henry swerved away. Steg-O-Saw-Us briefly got caught on the Flame Pit as it and Henry locked together, but both robots separated quickly, with Steg-O-Saw-Us turning itself around over the flames. It was almost overturned twice by an arena spike as it pursued Henry again, but escaped and waited for Henry to drive away from Sgt. Bash's CPZ before attacking it again. However, Henry drove straight past Steg-O-Saw-Us and into Shunt's CPZ, where it was permanently immobilised and dragged out by Shunt’s axe. Steg-O-Saw-Us rammed Henry a few more times as it was left near the flame jets, and progressed to the Heat Final while Henry sustained tremendous damage from the House Robots.

There, it faced Series 2 Semi-Finalist Napalm for a place in the series semi-finals.

The two robots met each other in the centre of the arena, with Steg-O-Saw-Us ramming underneath Napalm with its tail before driving past and nudging Napalm away. More dodging ensued, before Steg-O-Saw-Us rammed Napalm into Shunt's CPZ twice, causing Napalm's plough and top armour to buckle. Both robots briefly escaped, before Steg-O-Saw-Us got underneath Napalm again, the latter's hazard sign falling through its chassis and onto the floor as it did so. Another ram sent Napalm precariously close to the flame jets, before Steg-O-Saw-Us pushed it around. Steg-O-Saw-Us was then pushed back into the wall by Napalm, with both robots getting stuck together and requiring the House Robots to leave their CPZs and separate them. An attack from Shunt almost forced Steg-O-Saw-Us onto its side against the wall, but Steg-O-Saw-Us eventually escaped, reversing to push Napalm from the side and again ram it into the wall. Steg-O-Saw-Us dragged Napalm back as the latter got caught on one of its top spikes, before pushing Napalm a few more times, buckling its armour, and eventually shoving it into Sir Killalot. It waited outside the CPZ as Sir Killalot caused more damage to Napalm, before being pushed back itself by Sir Killalot. Steg-O-Saw-Us spent the remainder of the battle slamming into and buckling Napalm's plough a few more times, before 'cease' was called and the battle went to a Judges' decision. The decision went unanimously in favour of Steg-O-Saw-Us, putting it through to the Series Semi-Finals.

"Steg-O-Saw-Us, from the dank mists of time, a dino-bot, strong and powerful!"
— Jonathan Pearce introduces Steg-O-Saw-Us at the start of Semi-Final 2

In the first round of Semi-Final 2, Steg-O-Saw-Us faced fellow newcomer Gravedigger.

In the opening seconds, it darted round the outside of Gravedigger before hesitating and being nudged back by Gravedigger. Steg-O-Saw-Us drove itself over the Flame Pit and past Matilda, before speeding across the arena and avoiding attacks from Gravedigger. Eventually, Steg-O-Saw-Us succeeded in pushing Gravedigger around in circles, before Gravedigger pushed it back into an angle grinder and Sir Killalot's CPZ. Sir Killalot pushed both robots back, which allowed Gravedigger to get underneath and briefly lift Steg-O-Saw-Us off its wheels.

"Gravedigger, in the ascendancy here... Steg-O-Saw-Us has something to do. Lacks real weaponry power, I should say, at this level of Robot Wars."
— Jonathan Pearce as Steg-O-Saw-Us survives being flipped the first time

"The dinosaurs are not extinct yet; Steg-O-Saw-Us goes through!"
— Craig Charles announces the Judges' decision

In the second round, Steg-O-Saw-Us faced Beast of Bodmin, the successor to Series 1 champion Roadblock.

In the Grand Final, Steg-O-Saw-Us faced the destructive Hypno-Disc in its eliminator.

It immediately rammed into the back of Hypno-Disc as the latter turned away, but sustained a few glancing blows from Hypno-Disc’s disc as the two robots drove away from each other. Steg-O-Saw-Us again slammed into Hypno-Disc, pushing it out of the way as it drove itself into Shunt’s CPZ. In attempting to escape the CPZ, it accidentally backed into Matilda's corner, and avoided the flame jets as it charged across the arena for another attack. Steg-O-Saw-Us nudged Hypno-Disc and attempted to lure it back, only for Hypno-Disc to slice through its right-hand side as it attempted to dodge. The two robots drove towards and circled round each other once again, with Steg-O-Saw-Us again deflecting Hypno-Disc's disc away as it tried to push it from the side once more. Steg-O-Saw-Us hit the wall before colliding tail-first with Hypno-Disc and ramming into it a few more times. It eventually rammed into and pushed Hypno-Disc from the rear, this time succeeding in pushing Hypno-Disc into the wall and momentarily stopping its disc from spinning up.

"...and this is a very plucky performance by Steg-O-Saw-Us. Many people thought this would be over in a trice...and again they're on the attack!"
— Jonathan Pearce as Steg-O-Saw-Us repeatedly rams Hypno-Disc

While it was eliminated from the Third Wars, Steg-O-Saw-Us was due to fight Fire Storm in a playoff to determine third and fourth places in the series. However, it was forced to withdraw from the playoff after the Jurassic Park team could not repair the damage inflicted to it in time. While this would have normally given Steg-O-Saw-Us fourth place by default, the Fire Storm team considered this unfair to the Jurassic Park team, so both teams agreed to take joint third place.

The withdrawal from the third place playoff is not counted as a loss.

Steg-O-Saw-Us in the arena during the Heat

Steg-O-Saw-Us during the Grand Final with no logo 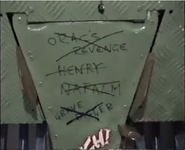