Official photo of the Stinger ripcord

As part of the third wave of pullback toys, a scaled-down replica of Stinger was released as Robot Wars merchandise, powered by a Ripcord system.

The toy of Stinger was unlike any of the other pullbacks. It wasn't a true pullback, instead it was powered by a ripcord system, in which the ripcord was threaded through one of the wheels. It came with a launcher as well so that it could be held in place while the ripcord was pulled, and released when the wheels were spinning fast enough. Stinger could be configured so that only one of its wheels spun when the ripcord was pulled, allowing it to spin madly like the real-life Stinger would do. The toy is based on the Series 5 version of the robot, the tip of the mace is yellow on one side and red on the other.

Like its real life counterpart, Stinger was a thwackbot, armed with its trademark mace. It is also one of the heaviest Robot Wars toys at nearly 140g. 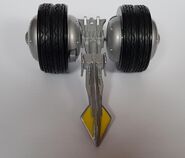 Side view
Add a photo to this gallery

Retrieved from "https://robotwars.fandom.com/wiki/Stinger/Ripcord?oldid=296762"
Community content is available under CC-BY-SA unless otherwise noted.