Circular saw
Statistics correct as of its most recent appearance on the show, or if not applicable, qualification attempt.

"Sweeney Todd is the only Robot Wars competitor to use Mecanum wheels - a conventional wheel with a series of rollers attached to its circumference. This means it can move in every direction, not just forwards and backwards."
— Robot Wars: Build Your Own Robot

Sweeney Todd was an invertible robot which competed in Series 8 of Robot Wars. It was built by an Oxford-based team, and was notable for being the first competitor to feature Mecanum wheels as a method of locomotion. However, it lost its Group Battle after becoming immobilised following attacks from PP3D and Apollo.

Sweeney Todd was constructed from 4mm of thick steel, and is armed with a circular saw, which according to the official Robot Wars website, was powerful enough to cut through steel and concrete. Sweeney Todd was the first robot in the history of Robot Wars to use Mecanum wheels, which have rollers attached to allow the robot to drive in any direction without turning. This gave Sweeney Todd high manoeuvrability, although it would still need to turn manually in order to point its circular saw at opponents.

Sweeney Todd weighed a mere 45kg, notably 10kg lighter than the maximum weight for middleweight robots. With the heaviest competitors in Series 8 weighing 110kg, Sweeney Todd was under half the weight of most competitors.

The name Sweeney Todd was derived from the antagonist of the 1846-1847 story series, The String of Pearls. Stage productions and films named after Sweeney Todd would later be produced, based on the same character.

Sweeney Todd was entered by a team of engineers from Oxford. The Team Captain was Sean Cleary, an electronics engineer, along with software engineer Laurence de Bruxelles and mechanical engineers Jon Elmer and Dominique Andreson.

Sweeney Todd appeared in Heat 4, where in the first round, it faced two time Annihilator champion Kan-Opener, full-pressure flipper Apollo, and undercutting spinner PP3D, built by Gary Cairns from the team that won Series 7 with Typhoon 2.

Its role at the start of the battle was passive, avoiding the other robots, only bringing its angle grinders into play onto Apollo when it had lost drive on one wheel. Sweeney Todd returned to the background, avoiding danger until PP3D attacked it, ripping an angle grinder out of Sweeney Todd. It became clear that Sweeney Todd was immobilised by this attack, only showing movement by coasting. It sustained more damage from PP3D, warping the shape of its body, and was flipped into the arena wall by Apollo. As Sweeney Todd was finally counted out, it was hit by PP3D, and was somersaulted by Apollo, and sent spinning away by the final blow from PP3D. It was eliminated from the competition, alongside Kan-Opener.

"It was a bit disappointing, but you know, we came here for fun!"
— Dominique Andreson 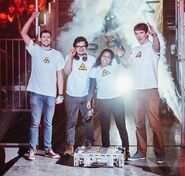 Sweeney Todd in the pits

Sweeney Todd is wheeled into the arena

Sweeney Todd in the arena