If I had to pick one I'd say UK win, as that was the series on which it was originally broadcast. But what are we doing about robots like Manta and Drillzilla? Do we just count them as wins in the series in which they were most prominent? Christophee (talk) 16:34, December 3, 2009 (UTC)

I guess that Manta, Drillzilla, The Revolutionist and Panzer Mk should have US Wins/Losses for the World Championship since they were most prominent in this series. ManUCrazy 16:49, December 3, 2009 (UTC)

I've rearranged this page to make German Robot Wars more prominent, and I've noticed that the wins/losses section is a problem again. Now it's not just the Second World Championship, but also the UK vs Germany Special which is part of two different versions, so how are we going to split them between UK and German wins/losses? Christophee (talk) 15:55, November 8, 2012 (UTC)

I'm wondering about the truth here with Ansgar. I can't remember where I found it, but I seem to remember something where the rule about the differences between walkers and shufflers HAD been recognised by the time Series 7 came along, and thus Ansgar 3 was not able to compete in the UK championships. However, it was allowed to fight in the World Championships. CBFan (talk) 09:22, January 22, 2010 (UTC)

I really need some help picking the better main image for Ansgar 3. The image we've used for years is bright and detailed, but it's shot from behind. An alternative that I've uploaded is still very detailed, but the bright lights obscure the logo a little, and you can't make out the shape of the sides very easily. Which image should go in the infobox guys? TOAST 17:18, January 28, 2019 (UTC) 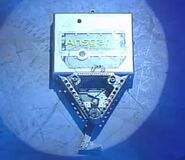 New option
Add a photo to this gallery

It's a toughun' If the Series 7 lighting wasn't so bad it would be easier but I think the second image looks better, more details and the weapon looks clearer.Diotoir the son of nemesis (talk) 17:28, January 28, 2019 (UTC)

I asked two people on Discord (i.e. people who aren't so familiar with Image 1 like we are) and they strongly preferred the current image. I have to admit I was leaning towards the new option, but I found that quite persuasive. TOAST 11:48, January 29, 2019 (UTC)

I have never had any issues with the current image. With it being from a further away angle, we get to see the height of the robot and a sense of every perspective. The image from the top not only missing an image of its sides, but it is also Portrait. The first image has the robot naturally Landscape, which I would prioritise most of the time. Jimlaad43(talk) 12:22, January 29, 2019 (UTC)

Retrieved from "https://robotwars.fandom.com/wiki/Talk:Ansgar?oldid=288295"
Community content is available under CC-BY-SA unless otherwise noted.