Mantis as last used at the RR O2 championships in 2010

Having found a better Mantis screenshot, I'm not sure which to use as the main image. The shot within the arena is in a better pose, and has the wheelguards, but the picture outside the arena is much higher quality. These are the candidates: 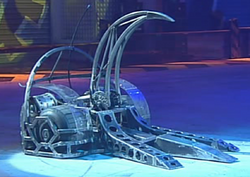 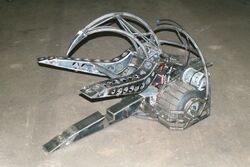 The image to the right is much better. It's higher quality, shows off both weapons. The problem with the arena image is even though it's a challenge upload it still looks quite jittery especially by the lifter. Diotoir the son of nemesis (talk) 06:13, July 20, 2016 (UTC)

Yeah it's a better angle than the previous challenge image but is still looks quite jittery.Diotoir the son of nemesis (talk) 08:36, July 20, 2016 (UTC)

Retrieved from "https://robotwars.fandom.com/wiki/Talk:Mantis?oldid=188439"
Community content is available under CC-BY-SA unless otherwise noted.