"Hammertime a reincarnation of Corkscrew 2 and for a brief period of time, Storm Force"
— article

I think LiamBryant was listing the robots the team fought with, so he was effectively saying "The team have fought with Hammertime a reincarnation of Corkscrew 2 and for a brief period of time, Storm Force". ManUCrazy 21:06, October 31, 2009 (UTC)

Just for everyone to note, there was a seperate team called Team Ripper that entered Ripper (Featherweight) and Ripper's Revenge, so we can't refer to that name as an alternate for this. Helloher (Death is not my phone number) 21:49, October 31, 2009 (UTC)

Oh, somebody else had already found this. I've uploaded it to the wiki, is this robot deserving of it's own page now that we have an image of it? - User:Merrick8

We need to post this on the community portal, this raises a serious topic. Matt

Shouldn't the profile picture be of the team? Also, shouldn't it be of a Robot Wars period robot, not one from the post-broadcast show? How about this one of the team with Rip and Jayne. Jimlaad43(talk) 18:51, September 5, 2013 (UTC) 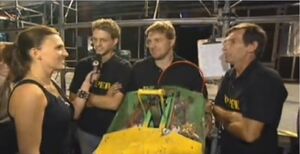 Retrieved from "https://robotwars.fandom.com/wiki/Talk:Team_Roaming_Robots?oldid=201210"
Community content is available under CC-BY-SA unless otherwise noted.