Lifting blade and turret-mounted chainsaw
Statistics correct as of its most recent appearance on the show, or if not applicable, qualification attempt.

"Let's get funny with the honey! The sticky stuff applies to the drive rollers to maximise grip on the rubber coated conveyor belt tracks! Now you know"
— Jonathan Pearce

Terminal Ferocity was a large yellow and black robot that competed in Series 3 of Robot Wars. It lost its first round battle to Facet after being flipped over. It attempted to qualify for four later series of Robot Wars, and fought an extensive career on the British live circuit, but never appeared on TV again.

Terminal Ferocity was designed to resemble an artillery turret, and was driven by two tracks made out of conveyor belts which ran on crown face pulleys. Its weapons consisted of a large petrol-driven chainsaw mounted on a rotating turret, which was controlled by a joystick, and a gas-powered lifter on the wedged base which was intended to lift opponents towards the chainsaw, which itself could be raised and lowered. Neither of these weapons were properly seen in action, however, as Terminal Ferocity was flipped almost immediately by Facet. Unusually, the robot also had honey applied to the drive rollers powering the tracks, which acted as a makeshift adhesive to help improve the robot's grip.

Its name was a pun on terminal velocity, the scientific term for the maximum velocity a moving object can reach

Terminal Ferocity qualified for Series 3 through attending the auditions.

In Series 5, Terminal Ferocity attempted to qualify under its original name but failed because of a compatibility problem between the receiver and the team delta interface that effectively shut Terminal Ferocity down.

The modernised version of Terminal Ferocity applied for Series 8 of Robot Wars, but was once again not selected to compete.

In the first round of the penultimate heat of the Third Wars, Terminal Ferocity was drawn up against previous Semi-Finalist Team Joint Effort with Facet.

"He was just a bit too fast for us."
— Fiona Ryland, afterwards 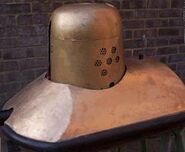 At the Sevenoaks charity event, which took place around the time of Series 3 and 4, Terminal Ferocity was repainted green and grey with the chainsaw painted black and white, and fought in a six-way melee against Facet, Chaos 2, X-Terminator, Corporal Punishment and Killerhurtz.

After Robot Wars ended, Terminal Ferocity was redesigned, still keeping the basic shape, but vaguely resembling a submarine. It competed in Roaming Robots, but with a new design using a pneumatic flipper, with limited success. It does however, hold the honour of being the fastest tracked robot in the history of Roaming Robots.

John and Fiona Ryland run a company named Ryland Research Limited, and in one of their projects, built a Securotrack high propulsion unit, with an element of autonomy, built to represent the University of Reading at the 2008 MOD Grand Challenge. It would later be donated to Collingwood School, where the students converted the robot into Track-tion and entered it into Series 10 of Robot Wars.

Terminal Ferocity made its Robot Wars Live Event debut in 2013 at Guilford where it was due to fight TR2, Dystopia & Weird mAlice in its heat, but couldn't due to the team not arriving in time. It also participated in the Robot Wars Championship 2013 held at Newport. It faced Cherub and Manta in the heats where it started off doing well managing to flip the other two robots a few times, but Terminal Ferocity eventually broke down and was eliminated.

Terminal Ferocity continued to compete in the live events, without winning a battle. Terminal Ferocity was sidelined in order for John and Fiona make a new shell made of HDPE for the robot.