Robot Wars Wiki
Register
Don't have an account?
Sign In
Advertisement
in: UK Series competitors, Robots with more Losses than Wins, Robots with Spikes,
and 10 more

Edit
For the robot from Team Ballistix, see Terror-Bull (Series 8).

Spiked horns & lifter
Statistics correct as of its most recent appearance on the show, or if not applicable, qualification attempt.

"Too delicate... or a bull in a china shop?"
— Jonathan Pearce introduces Terror-Bull in Series 4

Terror-Bull was a robot that competed in Series 4 and 6 of Robot Wars. It reached the second round of its heat in Series 4 at the expense of the seeded Cerberus before losing to Raizer Blade. Terror-Bull returned for Series 6 and seemed set to progress through its opening melee, before it was suddenly pitted by the eventual champion Tornado.

Terror-Bull was a black, white and red box-shaped robot with an 3mm aluminium shell and a design based on that of a bull. It was equipped with a lifting arm as its main weapon, which featured a 'flipping head' with spikes fitted on top to resemble the bull's 'horns'. In Series 4, the robot weighed 80.4kg - exactly one kilo over the weight limit - and could reach a top speed of 30mph as a result of its direct drive system.

In Series 6, Terror-Bull received a few modifications from its Series 4 appearance, the most noticeable being reduced gearing which lowered its top speed to 12mph, a slower-acting lifter, and an increase in weight to 97kg; the latter as a result of the increased weight limit introduced in Series 5/Extreme 1. In both series it competed in, Terror Bull had a high ground clearance of 15mm.

Terror-Bull's name was a pun on the word "Terrible", and was also an allusion to its bull-inspired design.

Terror-Bull competed in Heat P, and was due to face Onslaught and the eighteenth seed Cerberus in the first round. However, despite initially planning to team up with Onslaught to attack Cerberus, Onslaught withdrew at the last minute due to technical problems, and was replaced by reserve robot V-Max.

In the eliminator, Terror-Bull spent the opening moments weaving across the arena before trying to line up an attack on Cerberus. It then attempted to lift V-Max, but missed, and spun round over the Floor Flipper as V-Max flipped Cerberus over. Terror-Bull attempted to lift Cerberus back up, but again missed, before backing into Cerberus and nudging it as the House Robots came to attack it. V-Max rammed Terror-Bull towards an empty CPZ as Cerberus was pitted, although both robots progressed to the second round anyway.

There, Terror-Bull fought Raizer Blade, with the team anxious about potentially facing the second seed Hypno-Disc in the Heat Final.

Terror-Bull was sluggish to get away as Raizer Blade rammed into it, and missed a few lifts as the two robots bumped each other. Terror-Bull bumped into Raizer Blade twice more before driving towards and spinning over a flame jet, setting its tail alight as it did so.

"How do you like your bull? Rare done - ah, ha ha ha ha! Oxtail soup!"
— Jonathan Pearce as Terror-Bull sets its tail alight

Terror-Bull continued spinning over the flame jet before bumping into Raizer Blade, by which point its motors burnt out and it became immobilised. Raizer Blade nudged Terror-Bull and lifted it a few times as Terror-Bull tried to raise its lifting arm in response, before Terror-Bull sat immobile near the Floor Flipper and was attacked by Dead Metal.

"They're off to the old cattle market, to fetch what sort of a price, I wonder? Not a lot, for Terror-Bull..."
— Jonathan Pearce as Dead Metal attacks Terror-Bull

Terror-Bull retaliated by flicking part of Dead Metal's head up and lifting him with its arm, before Sir Killalot positioned it onto the Floor Flipper. It was thrown onto its back, and eliminated from the Fourth Wars.

"I wanted him on the flames enough to cook his tail, then get off, but he got stuck."
— John Fearnley explains his decision to drive Terror-Bull over the flame jet

After not competing in the Fifth Wars and Extreme Series 1, Terror-Bull returned for the Sixth Wars. Competing in Heat G, it faced the twelfth seed Tornado and two newcomers - Inshredable and Edge Hog - in the first round.

"...looks to me as if Tornado, AND TERROR-BULL WILL BE THE TWO TO GO THROUGH, BUT TERROR-BULL SUDDENLY PITTED!"
— Jonathan Pearce as Tornado pits Terror-Bull

Assuming that Inshredable had become immobilised, Tornado pushed Terror-Bull into the pit, despite Inshredable driving itself out of the CPZ at around the same time. This eliminated Terror-Bull from the Sixth Wars, along with the already-immobilised Edge Hog.

"...and Dead Metal got stuck in, immobilising Inshredible [sic], or at least so we though [sic]. So to end the fight we pushed Terrorbull [sic] into the pit - and then Inshredible [sic] drove out from Dead Metal's corner! Sorry Terrorbull guys, we should have left you alone, you would've gone through then..."
— Team Tornado on Terror-Bull's Series 6 demise.[1]

Terror-Bull in the arena during Series 4

Terror-Bull in the arena in Series 6 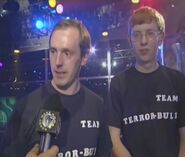 The Team in Series 6

Terror-Bull at the Sixth Wars qualifiers