Not to be confused with General Carnage or General Chompsalot

Dual spinning discs
Statistics correct as of its most recent appearance on the show, or if not applicable, qualification attempt.

"Upgraded for a surprise return"
— Robot Wars: The Official Handbook

The General was a Welsh robot which competed in the Robotic Soccer Tournament of Series 3 of Robot Wars, and later the main competition of the Series 8. It reached the Robotic Soccer final after beating Spectre, but lost to fellow Welsh robot Evil Weevil on a Judges' decision. In Series 8, it lost its Group Battle after Carbide ripped one of its wheels off and Behemoth left it on the Flame Pit.

The team also entered with Spartacus in the lightweight competition of Series 2 and had planned to enter Hazzard into the Series 3 Lightweight Competition, but this competition was cancelled due to a behind-the-scenes accident.

Before building robots, team member Haydn James originally built tractors for his own farm, with The General being built in the milking parlour.

Versions of The General[]

The Series 3 version of The General weighed 79kg, and was armed with a static scoop for weaponry. The robot was invertible, driven by four huge wheels, to fit with the robot's army theme. Though it had no active weapons, its pushing power was theoretically amongst the strongest in the Third Wars. The General brandished the Welsh flag to represent the team's home country.

"Farmer Haydn has designed and built his own tractors in the past and the General was built in the family’s milking parlour, with its design based on an army tank. The General is made almost exclusively from parts found around the farm – the spinning disc is taken from an old plough, and its motors are normally used to power electric gates."
— Robot Wars website

In 2016, a brand-new version of The General retained its invertible design, but switched to a setup with two prominent tyres, while still boasting great ramming power, with its fairly high top speed of 15mph. It was powered by a sealed lead acid 24V battery, and was equipped with two large spinning discs that could spin at 500-1000rpm. The robot was armoured in 2.5mm aluminium, although the team were more concerned about their exposed tyres, a notion shared by Jonathan Pearce.

The General attended the auditions for Series 3, but was not selected for the main competition, although it did appear in the Robotic Soccer side event filmed concurrently. For Series 4, the team had added a larger blade and claw at the front of The General, and placed a toy cannon on top for decoration. However, it failed to qualify, despite beating the team's other hopeful qualifier Slicer in its battle.

The General qualified for Series 8 via open applications.

The General competed exclusively in the Robotic Soccer competition, where it first faced Spectre in a one-on-one match.

The General had qualified for the final, a four-way free-for-all against Evil Weevil, Gnasher and Velocirippa.

The General was slightly too slow to get to the ball. However it finally managed to tackle Matilda and gain the ball, but lost it soon afterwards to Gnasher. The General then appeared to break down, as its batteries ran out of charge. It came back to life towards the end, but it was too little, too late and the judges' decision went against it, going in favour of Evil Weevil.

Over seventeen years after its last appearance on Robot Wars The General competed in Heat 1 of Series 8, fighting veterans Behemoth, Team Mute's new robot, Bonk and Carbide in its first round melee.

The team flew the Welsh flag as they entered the arena. At the start of the battle, The General's discs clashed with Behemoth's scoop, sending sparks flying, and The General was flipped over in response. The General's exposed wheels sustained a blow from Carbide.

"Tyres in Robot Wars, no no no no no! Not a good idea!"
— Jonathan Pearce, on The General's exposed tyres

The General fled, damaged by Carbide, but clashed with Behemoth's scoop to create more sparks, while Behemoth flipped itself over, missing The General, although Carbide launched another attack. The General attacked the side of Behemoth with its discs, and then went to attack Bonk, but this left The General unassuming of a back attack from Carbide. Hit at full strength, one of The General's tyres was ripped away, and rolled across the arena. An immobile General hobbled onto the flame pit, and sustained another blow from Carbide, which knocked The General out cold, eliminating it from the competition.

The insides of the Series 3 General

The General entering the arena in Series 8 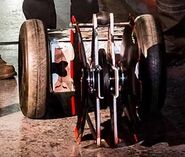 The General before its Series 8 battle

The General's team approach the arena

The General after the melee

The General inverted in the arena