Robot Wars Wiki
Register
Don't have an account?
Sign In
Advertisement
in: US Representatives, International event only competitors in the UK Series, Axlebots,
and 6 more

Torque reaction 'thumperizer'
Statistics correct as of its most recent appearance on the show, or if not applicable, qualification attempt.

"We're here for maximum Mangulation to defend the title of the United States!"
— Dan Danknick

The Mangulator was a robot which represented the United States in the War of Independence during The Fourth Wars, also competing in the unaired American Robot Wars 2000 pilot for MTV. The Mangulator's only UK Series battle ended in defeat against Ming 2.

The Mangulator was a torque reaction thwackbot, with two large, exposed tyres. Its swinging axe weapon was described by team captain Dan Danknick as a "thumperizer". At 86.8kg, it complied with the substantially higher 95kg limit for heavyweights competing in the American Robot Wars 2000 pilot, offering a considerable advantage over UK representatives complying with the original 79.4kg limit.[1] Even with this, The Mangulator's exposed wheels proved to be a major weakness, as did the fragility of the axles holding them in place.

The Mangulator was designed in both the United States of America and the United Kingdom, with assistance from veteran UK series roboteer Adam Clark, as well as Bob Pitzer of Team Raptor. The team captain Dan Danknick had built radio control systems and motors for several of the UK series competitor teams. Danknick was also a part of Adam Clark's team in the International Championship in the second season of Robot Wars: Extreme Warriors with Clark's machine Wowot. Team Delta also entered Spike into the American Robot Wars 2000 pilot but both robots were defeated in the first round. The Mangulator never competed in any other robotic-themed competitions aside from American Robot Wars 2000 and the War of Independence, the only American representative from the latter and the only robot present at the former, not to do so.

Before its televised debut on Robot Wars, The Mangulator participated in an untelevised pilot episode commissioned by MTV, dubbed American Robot Wars 2000. It was among the eight robots selected for the competition, and although the field of competitors was later reduced to four, The Mangulator passed its audition on-site and maintained its place in the competition[2].

In the first round, The Mangulator fought a seasoned BattleBots competitor frenZy. According to Gearheads: The Turbulent Rise of Robotic Sports, frenZy "decimated" The Mangulator in a one-sided battle, resulting in its elimination at that stage.

In the War of Independence, The Mangulator represented the United States of America, and fought the British robot Ming 2 in the first round.

The two machines drove into each other at the start, with The Mangulator's axe clipping Ming 2 lightly. The Mangulator began to attack by spinning on the spot and struck Ming 2 again, but didn't cause too much damage. Ming 2 drove underneath The Mangulator and tried to use the flipper, but this caused it no harm since it was invertible. The UK representative began to take control of the battle, driving The Mangulator towards Sergeant Bash, then the flame pit. The Mangulator escaped and drove towards the arena side wall, where Ming 2 charged at one of its wheels and a wheelshaft failure meant that it broke off. The house robots immediately closed in for the kill, with Matilda cutting into the remaining tyre, Sergeant Bash gripping the "thumperizer" weaponry and Shunt axing and pulling parts of The Mangulator's armour plating. Matilda and Shunt ended the punishment by dumping The Mangulator into the pit.

The above record is reflective of team captain Dan Danknick only. Adam Clark competed in UK Series 1-3 and 5-6 with various robots, and Bob Pitzer competed in both seasons of Robot Wars: Extreme Warriors. The Mangulator also competed in the untelevised American Robot Wars 2000 pilot.

The Mangulator in the arena 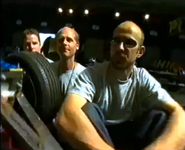 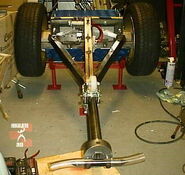 The Mangulator from the front

Following his appearance in the UK series of Robot Wars, Dan Danknick would go on to become one of the analysts for the TLC television show Robotica, providing technical insight on the robots alongside the more entertainment-focused Ahmet Zappa. Soon afterwards, Dan Danknick would also be enlisted as part of the technical crew for both seasons of Robot Wars: Extreme Warriors.

Team Delta also entered the original US Robot Wars, BattleBots and RoboGames with different machines in various weight classes, all with varying levels of success. Bob Pitzer would also compete as part of Team Raptor in several competitions, while Adam Clark continued to compete separately.