Hydraulic pincers
Statistics correct as of its most recent appearance on the show, or if not applicable, qualification attempt.

"Now this one can beetle about!"
— Jonathan Pearce as The Stag entered the Arena in Series 6

The Stag was a heavyweight robot which competed in Series 6 and 7 of Robot Wars, built by Team Bodge-it. It lost in Round 1 in both of its appearances. The Stag also had a featherweight equivalents Staglet, and Whipper.

"The aluminium shell, home-made speed controllers, hydraulic pincers, crushing at those 7 tonnes, a rear spike, oh and don't forget the chicken on the back!"
— Jonathan Pearce sums up The Stag in Series 6

The Stag was invertible, two-wheel driven robot, designed to resemble a stag beetle. Like the insect, The Stag had horizontally mounted hydraulic pincers for weaponry, which could crush with 7 tonnes of pressure. A rear spike also provided additional weaponry. The Stag had an aluminium shell and home-made speed controllers, but the wheels were exposed, even after being reinforced with polycarbonate in Series 7.

The robot was largely unchanged between Series 6 and 7, although the robot's eyes used a different design in Series 7, along with additional paint on its front wedge. The Series 6 version of The Stag also dragged a novelty rubber chicken at the rear of the machine.

The robot is named after the stag beetle. The robot's working name was Mr Hyde, but this was changed shortly before the Series 5 qualifiers[1].

The Stag was entered into Series 6 and 7 by Team Bodge-it, a three-man team based in Newcastle, Staffordshire. The team was captained by Terry Martin, who was joined by David Martin and Mark Pepper. Team Bodge-it also competed in the Featherweight Championship during Series 7 with Staglet and Whipper. Terry Martin wore "hi-tech headgear" in all of The Stag's competition appearances, adding personality to the team's image.

The Stag had previously failed to qualify in the Fifth Wars. At the Series 5 qualifiers, it fought and beat Mega Hurts after scratching and denting, but not piercing, Mega Hurts' sides. The Stag then fought and drew against Lambsy, and also defeated Mute. Despite this performance, The Stag failed to qualify.

The Stag also qualified for Series 7 under currently unknown circumstances.

The Stag first appeared in Heat E of the Sixth Wars. It faced off against the 9th seed and semi-finalist Wild Thing 2, as well as fellow newcomers Vader and UFO in its first round battle.

The Stag started well, gripping Wild Thing 2 and forcing it backwards while prising its claws underneath a layer of Wild Thing 2's armour. Wild Thing 2 retreated, and The Stag tried to attack UFO, but just as it got hold of it, Vader inflicted severe damage to The Stag, ripping off the rubber covering from one of its wheels. Vader then came in with another attack, which separated The Stag and UFO, and buckled The Stag's right claw. Wild Thing 2 then rode up the back of The Stag, causing damage to its shell and forcing it into Sir Killalot's CPZ. The Stag tried to move away from danger, but because of its now limited movement due to the damage caused by Vader it was only able to move around in circles.

"I think the chicken's come off. Did I see the chicken of The Stag, there, had come off? Well, I mean, that's it then, isn't it, really? It's powerless now..."
— Jonathan Pearce

Sir Killalot then picked The Stag up, causing its mascot chicken to fall off, before spinning it around and placing it back onto the arena floor. With The Stag still restricted in its mobility, Refbot counted it out, which left Sir Killalot and Sgt. Bash able to inflict further damage to the beaten machine. Sir Killalot opted to lift The Stag's mascot chicken by its neck, while The Stag continued to furiously spin around, before UFO decided to force The Stag down into the pit of oblivion just before cease.

The Stag returned in the Seventh Wars, and turned up in Heat C, where it competed against Scorpion, Team Vader once again and their new robot IG-88, and newcomer Tomahawk as it looked to progress to the second round.

The Stag charged into the centre of the arena after activate was called, but was immediately pushed backwards by Scorpion. The Stag spun around to move away from Scorpion, before clutching it with its claws. Scorpion worked its way free from The Stag's grasp, with IG-88 then crashing into the rear-end of a reversing The Stag with its bi-rotational axe. The Stag chased down Scorpion once more, before turning towards IG-88, where it sustained a full-frontal slam from IG-88, which threw The Stag up into the air and slightly warped one of its claws.

The Stag then made its way to the pit release button, successfully activating it at the second time of asking, before pushing Scorpion once more, as it was attacking the immobile Tomahawk. Scorpion and IG-88 then focused their attention on The Stag, and another strong attack from IG-88 threw The Stag upside down. The Stag responded by sliding underneath IG-88 and edging it backwards, before IG-88 came back onto the attack. Suddenly, in a bizarre turn of events, with IG-88 on the offensive, The Stag tried to retreat, but only succeeded in backing itself into the pit of oblivion.

"Oh, what's happened to The Stag?! It's reversed straight into the pit of oblivion! And we know that stag beetles can't self-right!"
— Jonathan Pearce

This saw The Stag eliminated from the Seventh Wars along with Tomahawk. 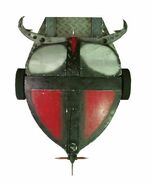 The Stag around the time of Series 7 The Stag in Series 7

The original design sketch for The Stag

The Stag being worked on during the Series 5 qualifiers

The internals of The Stag at a live event 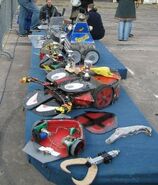 The Stag and Staglet on display

The Stag also competed in the 2003 series of Robot Wars' sister show Techno Games as BeetleBot, working with Brutal Beetle in the football competition. They lost to Savage Toaster and Ickle Toaster 1-0 in the first round.

Whilst Robot Wars was on air, The Stag competed at a number of live events, including the Debenham Robot Rumble in 2002 and a Robots Crusade event the following year. In the latter, The Stag made the final of the competition, only losing out to eventual champion Mute.[2]

After Robot Wars ended, The Stag continued to fight in live events for a while, including a destructive loss to X-Terminator in 2004, but over time David Martin lost interest in robot combat, and in 2011, the empty shell of The Stag, without electronics, was sold on eBay.

"It's not really something i'm interested in anymore but I thought it was shame to let it go to the skip. So I thought I would let it go to someone that could use it."
— David Martin on selling The Stag.[3]

The Stag was sold on to James Baker of Team GlitterBomb and it has since been used as a static display for events mostly held in Wales such as Comic Con alongside other robots under Baker's ownership such as The Mule, Wheely Big Cheese and GlitterBomb.