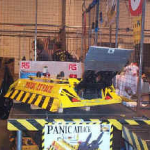 My name is Michael but I prefer 'Mike' or 'Mikey'. I was born in 1990 and I am from Stevenage, Hertfordshire but I spent 2006-2012 living in Tyne and Wear because I was supported by E.S.P.A (Education and Services for People with Autism) after leaving school. I have Asperger's Syndrome but I am only mildly affected. I will try anything once. My main interests are F1, reading and writing fiction, computing and Performing Arts. I performed in 5 shows for E.S.P.A College, my best role to date being Riff-Raff in 'The Rocky Horror Show'.

I am also into Comedy, Science-Fiction, Animation and Anime and I get bored easily when I have nothing to do. My favourite author is Roald Dahl and I have read most of his works. I also took a strong interest in J.K Rowling's Harry Potter series. I mostly like to write Fiction, I have a strong belief in Psychic abilities and I have started writing a saga focusing on 'Two Psychic Families'.

I have followed Robot Wars pretty much since the very beginning. I did not really get into it properly until the 3rd Wars. I still continue to be a fan of Robot Wars to this day and I attended the 2011 UK Championship at the 02 Arena (the event was won by Ripper) and I once attended a Robot Wars live event in Birmingham in 2001. I even watched the repeats on Dave and Challenge and my most favourite competitors are Razer and Hypno-Disc. I have attended Robots Live at the Gordon Craig Theatre (my local) every year since 2014.

Retrieved from "https://robotwars.fandom.com/wiki/User:Nononsensecapeesh?oldid=299576"
Community content is available under CC-BY-SA unless otherwise noted.